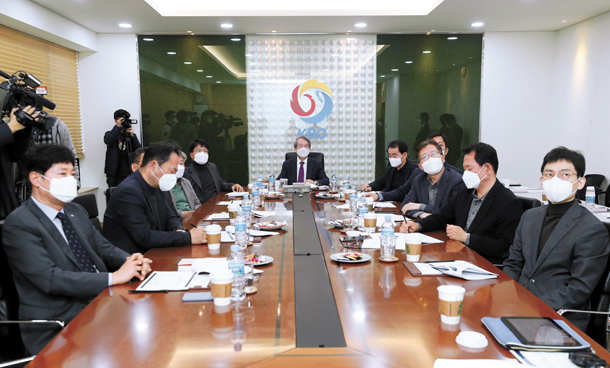 The KBO commissioner and club presidents hold a meeting regarding the start of the 2020 regular season at the KBO headquarters in Seoul on Tuesday. [YONHAP]

The KBO will postpone the start of the 2020 season.

The KBO held its second meeting on Tuesday since the coronavirus outbreak and finally reached the decision to postpone the season to sometime in April, instead of its official starting date of March 28. It will be monitoring the situation closely before it announces the new starting date.

The league announced that it has reached the decision after consulting with health experts, and since the safety of the fans and the players are the priorities, it decided to postpone the season.

The official start date, when decided, will be announced two weeks ahead of time to allow clubs and their players to prepare.

Despite the postponement, the KBO added that the goal is still to play all 144 regular season games.

However, that goal seems unlikely taking into consideration the 2020 Tokyo Olympics. The KBO already announced it would take a three-week break during the games, from the end of July to the start of August.

To make this happen, the KBO mentioned the possibility of playing some of this season’s games behind closed doors, in empty stadiums. And taking monsoon season into consideration, games could be scheduled as doubleheaders. The KBO said its goal is to begin in mid-April to try and complete the season by the end of November.

“We could probably start in late April, but in that scenario, the season may end in early December,” said the KBO’s secretary general Ryu Dae-hwan. “We’ll look into playing doubleheaders and playing Mondays.”

As the majority of the KBO clubs are back in Korea after cutting spring training short due to the coronavirus, an indefinite suspension comes as a blow to managers and players, who must now maintain their readiness without knowing when they’ll actually hit the field.

Because the KBO canceled the entire schedule of exhibition games, the only way for the players to keep themselves in competitive mode is to play intrasquad games.

Not only was it the first time the league decided to cancel all the exhibition games, it is also the first time in history that the KBO postponed the start of the regular season.

Another issue will be training with foreign players. When the clubs headed back home from spring training, five clubs - LG Twins, Samsung Lions, Hanwha Eagles, Kiwoom Heroes and the KT Wiz - allowed their foreign players to return to their home countries until the starting date is announced.

The KBO’s decision is in line with the majority of other local leagues who postponed their seasons in a bid to safeguard against the coronavirus outbreak in the country.

The K League was the first one to do so and has still yet to announce the start date of its season. As for the Asian Football Confederation (AFC) Champions League group matches that were supposed to be held in Korea, the AFC rescheduled them to instead be played in Australia.

And it’s not just Korea where sports are taking a hit. Also on Monday, Japan announced its decision to postpone its Nippon Professional Baseball regular season. The regular season was supposed to start on March 20, but will instead be postponed sometime until April.

In Italy, all sports in the country have been suspended until at least April 3. This includes Serie A matches, the top football league in the country.