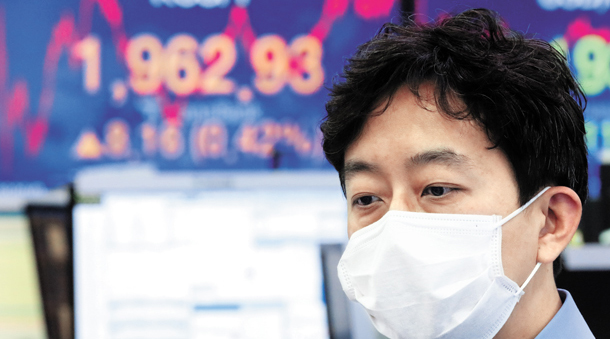 An electronic board at Hana Bank in central Seoul on Tuesday shows the Kospi closing higher, the first rise in three trading days. [YONHAP]

A ban on short selling is returning for the first time in three years with a rule change that would make it easier to add stocks to the list of companies that cannot be sold short.

The adjustment of the rules will be effective today, but only for three months.

It is being introduced in an effort to stabilize the stock market, which experienced its worst fall in two years on Monday on concern over the coronavirus outbreak and falling share prices globally.

According to the Financial Services Commission (FSC), new criteria will be established for designating shares as “overheated” and thus no longer qualified for short selling. Under the new rules, if a stock falls 5 percent intraday and short selling transactions are more than three times normal, it will receive the designation. Previously, six times the normal short selling activity was the trigger.

For Kosdaq shares, only twice the normal short selling activity is required, down from five times.

Short selling suspensions are being extended from one day to 10 business days.

The move comes after Monday’s 4.19 percent decline in the Kospi index and a rout in stocks globally. In short selling, investors borrow shares and then sell them immediately, hoping to buy them back later at a lower price and repay their loan with cheaper stock. It is a way to profit in a falling market but is thought by some to contribute to instability and force down prices.

The government last declared stocks as overheated - and thus protected from short selling - in 2017.

The biggest contributor to the fall Monday was a massive sell-off by foreign investors. They dumped 1.3 trillion won ($1.1 billion) worth of stocks, an all-time record for data compiled since 1999.

The majority of investors engaging in short selling are foreign investors, estimated to account for 60 percent of all relevant activity. Retail investors are responsible for only 1 percent.

On the Kosdaq, short selling activity averaged 102.7 billion won a day in 2019. This month through last Friday, it had hit 162.8 billion won.

Other Asian markets also stabilized, with the Nikkei 225 up 0.85 percent, Hong Kong’s Hang Seng Index up 1.41 percent and Shanghai stocks up 1.82 percent.