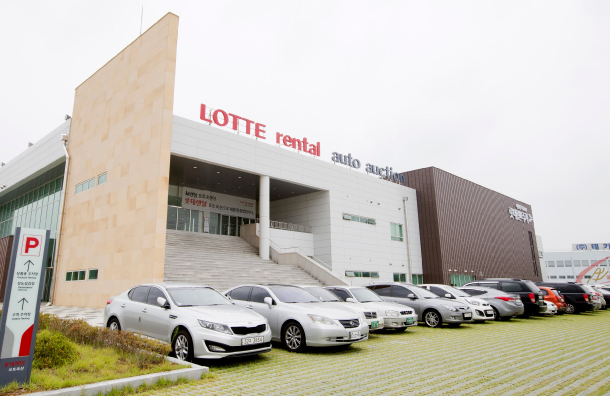 Rental cars are parked in front of Lotte Rental’s parking lot on Jeju Island. The company said around 40 percent of customers who leased cars last year were millennials in their 20s and 30s. [YONHAP]

Add car ownership to the ever-growing list of things killed by millennials.

Individuals are replacing companies as the biggest customers in the car rental industry, according to Lotte Rental, Korea’s top rent-a-car company, with the vast majority being people in their 20s and 30s.

Individuals’ share of the customer base has nearly doubled in the past five years, the company said Monday.

Among customers who signed a lease contract, 45.1 percent were individuals and 54.9 percent were corporate clients.

“People in their 20s and 30s think less about the total amount and are willing to spend more if it means less stress and extra expenses,” said Seo Soo-yeon, a manager at Lotte Rental. “[To appeal to these customers], we are trying to increase offers that do not require face-to-face contact.”

The number of cars put up for rent in Korea has increased from 257,751 in 2010 to almost 1 million as of December, according to the Korea Rent-a-Car Association.

Generation Z, or those in their mid-20s and younger, were leading the trend. From 2016 to 2019, the share of customers in this demographic increased fivefold.

The numbers are similar for those in their 30s and 40s, a group normally considered to have the financial ability to own cars. The share of leasers of this demographic increased threefold over the same period.

Over the years, views on leased cars have shifted, according to industry officials.

Young people are less likely to consider leasing cars as something only reserved for companies. Many who fall into this demographic grew up with the sharing economy model, in which everything from cars to accommodations, and even clothes, can be rented.

Compared to many offline car dealerships that sit empty amid the coronavirus outbreak, Lotte said customers of its car rental service increased by 29 percent last month compared to December.

Another factor driving this trend is a change in values, as more young people are willing to pay a little extra for convenience.

Leasing a car does not require the costs of maintenance and insurance fees that come along with ownership. Rental fees do add up, however, making that option more expensive overall compared with purchasing a vehicle.

Nowadays, first-time car buyers in their 20s tend to choose leasing as a way to minimize hassles, allowing them to avoid signing up for insurance, taking care of acquisition taxes and the other myriad complications that come with car ownership.

Still, it may require some time for car leasing to reach the mainstream. Many people still prefer the cheaper option of owning a car, although some car rental companies have refuted this claim by claiming that leasing can be cheaper than purchasing a car on an installment plan.

While skeptics remain, the domestic rent-a-car market continues to grow.

Alongside the high number of rented automobiles on the road, the number of rent-a-car businesses has increased from 757 in 2010 to around 1,100 as of last year.

Meanwhile, Hyundai Motor’s sedans, the Grandeur and Avante, were the most leased cars last year. The Tivoli, made by SsangYong Motor, ranked second, followed by the Hyundai Sonata and the Kia Carnival.