Only three months in, 2020 already looks pretty dire for the local automobile industry, with the coronavirus outbreak merely adding to longer-term problems.

The much hoped for yearly production target of four million units is far from reach, and falling short is sure to result in the loss of jobs. 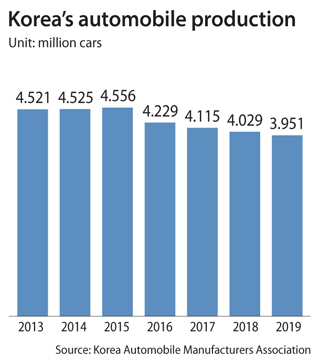 According to the Korea Automobile Manufacturers Association (KAMA) on Tuesday, aggregate production by the five domestic automakers for February reached 189,235 units, down 26.4 percent from 257,276 units posted in the same month last year.

That figure was nearly half the 336,032 units made in February 2017 and the lowest figure for February since 1999, which was at the depth of the Asian financial crisis.

The two largest by sales in Korea, Hyundai and Kia, had to close factories for more than a week after deliveries of auto parts from China were delayed, and similar production gaps were felt by GM Korea, Renault Samsung Motors and SsangYong Motor.

Even when factories went back to work last month, operating rates were sometimes below 50 percent, disrupting the five manufacturers’ original production and delivery schedules.

Production delays could continue especially for Hyundai Motor and Kia as many of their suppliers are in Daegu and North Gyeongsang, the centers of Korea’s coronavirus storm - and home to 20.3 percent of all auto parts manufacturers in the country.

Korea has so far reported the third-largest number of cases of the coronavirus following China and Italy.

The unexpected coronavirus crisis is raising concerns that the local automobile industry will have a worse year than the last, when the five automakers ended up making 3.95 million cars, down 1.9 percent from 2018. Korea, the 7th-largest auto-making country in the world last year, has been seeing its yearly car production decline since 2016.

“Four million units is a symbolic level for the local automobile industry to keep its head above water,” said Kim Pil-soo, an automotive engineering professor at Daelim University.

“The five automakers failed to reach that figure last year, and it is pretty evident that the figure will dip below 3.5 million this year.”

According to Kim, such shortfalls in production will inevitably result in job losses and bankruptcies among the more than 4,000 Korean companies that work with the five domestic automakers as suppliers or contractors.

Continuing conflict between unions and managements at some of the automakers is taking a toll too.

Renault Samsung Motors, which had a contract with Nissan to make Rogue SUVs come to an end last year, wasn’t given any order from its French parent company this year.

A spokesperson for the Busan-based automaker said Renault Group is hesitant to give orders to Renault Samsung Motors due to worries about conflict between the union over wages and working conditions.

The spokesperson said workers at Renault Samsung Motors are paid the most competitive wages within Renault Group, but the union has been demanding more.

“As the coronavirus outbreak spreads to other parts of the world and keeps on growing, Korean automakers and their partners could also end up with fewer vehicle and parts sales,” Daelim University’s Kim said.

“Korean automakers are not making high profit margins from selling expensive cars, so the best way for them to make money is by making and selling as many units as possible.”

The five automakers have already seen demand for cars fall amid the coronavirus outbreak.