The ongoing outbreak of the novel coronavirus has made its mark on the April 15 general election campaigns of some candidates.

According to health authorities, the late campaign chief of the main opposition United Future Party (UFP)’s candidate in Buk A District of Daegu tested positive for coronavirus following a postmortem on Tuesday. The victim was Lee Cha-su, former chairman of Buk District Council of Daegu and the chief of Yang Geun-hee’s campaign. Lee, 62, had a fever and cough on Saturday and took a test to see if he had been infected with the coronavirus, but the test was negative. On Monday morning, Lee suffered a cardiac arrest and was transported to a general hospital by emergency responders. He died soon after. 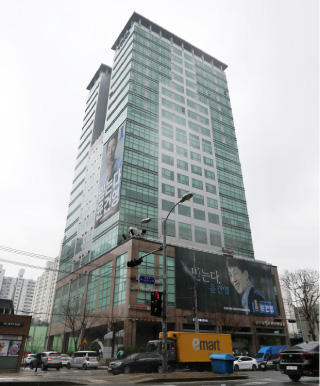 The campaign office of Youn Kun-young was shut down Tuesday due to its proximity to a cluster of infections. [NEWS1]

Following the confirmation, Buk District Office of Daegu conducted disinfection operations at Yang’s campaign office and other public facilities in the district. A survey is ongoing to find out who Lee came into contact with. Yang and campaign officials took tests Tuesday and started self-imposed isolation. Yang said she stopped face-to-face campaign activities from Feb. 19 and the number of campaign workers in the office was kept to a minimum. Yang, head of Korean League of Women Voters, was nominated by the UFP last week as its sole candidate for Buk A District of Daegu. The party eliminated the district’s current lawmaker, Rep. Choung Tae-ok.

The campaign office of Youn Kun-young, one of the closest confidants of President Moon Jae-in, was shut down on Tuesday due to its proximity to a new cluster of coronavirus infections. Youn, former director for the state affairs planning and monitoring office of the Moon Blue House, is the ruling Democratic Party (DP)’s candidate for Guro B District of Seoul.

After dozens of workers at a call center on the 11th floor of the Korea Building in Sindorim-dong, Guro District, tested positive for coronavirus on Monday, Youn said he took a test and started self-imposed isolation because his campaign office was located on the sixth floor of the same building. All workers in his office also took tests and started isolation.

As of 3 p.m. on Tuesday, about 60 workers of the call center and their families had tested positive, and the number of patients from the cluster outbreak is growing. Youn, however, tested negative. “I was lucky, but I still feel heavyhearted,” Youn wrote in a Facebook post on Tuesday.

Although Youn’s campaign office was located in the same building as the call center, he was not classified as a close-contact person. His office and the call center used different elevators, and Youn’s office started precaution measures such as taking temperatures of campaign workers and visitors from two weeks ago. “There was little possibility of physical contact, but Youn and other campaign members started self-imposed isolation as preemptive measures,” an aide to Youn said. “We will talk about relocating the campaign office and how and when to resume the campaign.”

Guro District disinfected the entire building Monday evening and shut it down. A coronavirus test station was set up on the first floor of the building and people in neighboring buildings began undergoing tests.

Meanwhile, the National Election Commission said Tuesday that voters infected by the virus and admitted to hospitals or under isolation at public facilities or homes will be allowed to cast ballots by mail for the April 15 elections.

The Public Official Election Act allows voting by mail for people with disabilities, patients in hospitals and inmates in prisons. Soldiers and police who are stationed in remote locations are also allowed to vote by mail. The election watchdog said coronavirus patients are eligible for vote by mail.

Patients must mail their application between March 24 and 28. Confirmation by hospital chiefs or health ministers is required for the applications. Local government heads will issue confirmations for those under isolation at homes.