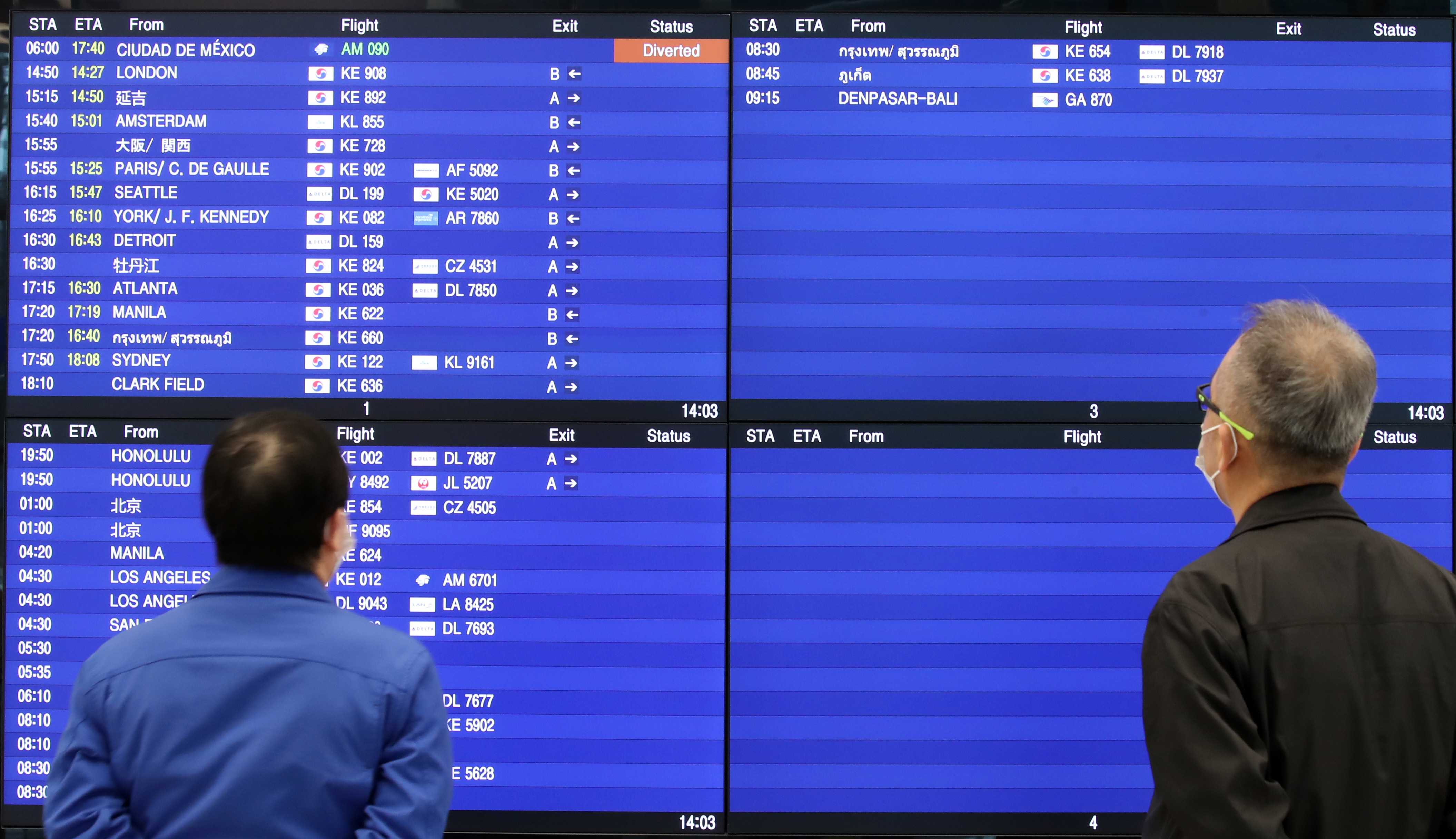 A flight information board at Terminal 2 of Incheon International Airport is half empty on Tuesday after more than 100 countries around the world imposed entry restrictions on travelers from Korea. [YONHAP]

President Moon Jae-in ordered his diplomats to talk to countries blocking Koreans from entering to find exceptions for business travelers, possibly through a new system of health certificates issued by the government.

Kang Min-seok, the Blue House spokesman, told reporters that the health certificates would confirm that individuals tested negative for the new coronavirus.

A total of 109 countries and territories have imposed entry bans or quarantines on people coming from Korea as of Tuesday, according to Seoul’s Ministry of Foreign Affairs, three more than the previous day, which is expected to have a major impact on Korean businesses.

When asked by a reporter if discussions on the issue would also be held with Japan, Kang said he could not confirm it.

However, Foreign Ministry officials have said that diplomats are in discussion with over 20 key foreign trading partners to allow businesspeople exceptions to the travel bans with government-issued health documents.

New coronavirus infections have slowed down in Korea, but there has been a sharp spike in cases globally.

Japan and Korea suspended mutual visa-waiver programs starting Monday, and travel between the two countries has virtually been severed.

Seoul implemented new restrictions on travelers from Japan after Tokyo on Thursday announced it would require two-week quarantines for visitors from Korea, among other restrictions.

In a press briefing for foreign media in Seoul Monday, Korea’s Second Vice Foreign Minister Lee Tae-ho said, “The consensus among public health professionals seems to be that travel bans are not effective in containing contagious illnesses and can make things worse, even, by fueling a sense of complacency.”

He added that the World Health Organization (WHO) says that restricting the movement of people and goods during public health emergencies is “ineffective” and recommends that any travel measures “need to be proportionate to the public health risk” and be “reconsidered regularly.”

Lee noted that Seoul has followed such recommendations and has not introduced any entry bans except on people coming from Hubei Province, the epicenter of China’s coronavirus outbreak.

Despite public concern over the entry of people coming from other parts of China, the Korean government did not widen its entry ban beyond Hubei Province and its capital of Wuhan and instead implemented special entry procedures for Chinese visitors to better keep track of their whereabouts and health conditions while visiting Korea.