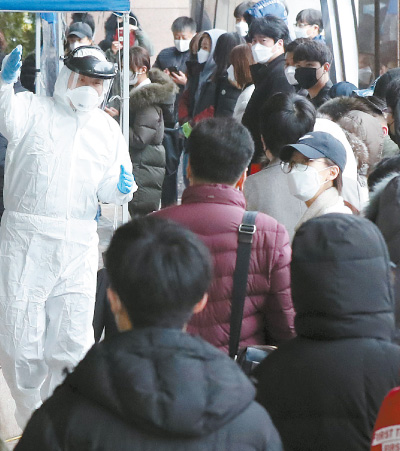 People line up at a special testing center near a building in Guro District, western Seoul, Tuesday, after health officials announced that Seoul’s largest cluster of infections was traced to a call center on the building’s 11th floor. [NEWS1] 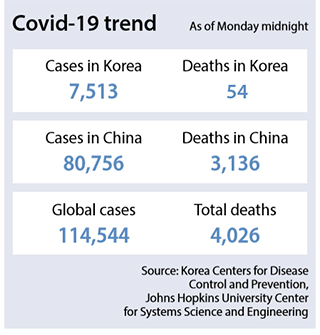 At least 64 cases of the new coronavirus were traced to a call center in Seoul, local officials announced Tuesday, becoming the largest cluster of infections in the capital.

Officials in Seoul warned Tuesday that the figure was expected to rise as tests on employees at the call center in Sindorim-dong, Guro District, western Seoul, were ongoing. Of the 64 cases of infection linked to the call center by 2 p.m. Tuesday, at least four are known to be relatives of the workers.

The Sindorim outbreak was reported as nationwide infections of the coronavirus have been dropping drastically compared to last week.

The KCDC used to compile daily infections twice everyday - at midnight and 4 p.m. - but starting from Tuesday, it ditched the 4 p.m. count to reduce confusion among local government offices tracking infections.

The Sindorim call center, which was operated by Metanet Mplatform and provided customer services for the local affiliate of the global insurance group Chubb, is known to have had at least 207 workers - including 148 employees and 59 so-called trainees - who worked on the 11th floor of the 19-story Korea Building.

Lee Seong, chief of the Guro District Office, said Tuesday there were about 550 more employees of the call center who worked on the seventh, eighth and ninth floors of the building, adding they were being tested as well.

Lee warned that more infections from the call center could be announced in coming days, saying “a significant number” of the 207 workers on the 11th floor had not been tested yet and that of those who did get tested so far, only about a half received their test results, including 64 who showed positive.

Health authorities said the patients live in various parts of Seoul and the surrounding metropolitan area, which includes Incheon and Gyeonggi, sparking fears of transmissions within the capital and outside as well.

Seoul is the most populous city in Korea with nearly 9.7 million residents, or 18.8 percent of the nation’s total population, and Guro District is the 11th most populous district out of Seoul’s 25 with about 406,000 people living there, according to government statistics.

Korea’s daily count of new coronavirus infections has been falling after local officials finished tracking down followers of the Shincheonji religion, whose church building in Daegu was the epicenter of Korea’s outbreak so far.

Nearly three-quarters of Korea’s total infections are still concentrated in Daegu, while 15 percent are from the surrounding province of North Gyeongsang, both in the nation’s southeastern region.

Infections in Seoul accounted for around 2 percent of nationwide infections, according to KCDC statistics on Monday, while cases in Seoul, Incheon and Gyeonggi combined made up about 4 percent.

The death toll stood at 58 by Tuesday at 7 p.m., five more than the same time on Monday. The latest fatalities were mostly senior citizens in Daegu who had underlying illnesses.

The KCDC said Tuesday afternoon that 54 people were in critical condition. At least 247 people have fully recovered from the virus as of Monday midnight, up by 81 people from the day before.

Officials from the KCDC and Nowon District Office in northern Seoul said Tuesday that the first patient to have been diagnosed at the Sindorim call center was a 55-year-old Korean woman who lives in Nowon and doesn’t appear to have any links to the Shincheonji religion or visited China or Daegu and North Gyeongsang recently.

According to health officials, the patient, who works at the call center, felt a cold come on last Friday and tested positive for the virus on Sunday. Upon learning that the patient works in Guro District, the Guro District Office informed the call center to quarantine all its workers at home and shut down the office.

Health authorities who traced the first patient’s contacts from last Thursday to Sunday said she seemed to have mostly stayed at home or at work. She said she rode in her husband’s car from her house to Wolgye Station on Seoul’s subway line No. 1 on her way to work and wore a face mask on the subway all the way to Sindorim Station. She said she went to a church near her workplace for about 20 minutes on Thursday and Friday, officials said.

The close seating at the Sindorim call center plus the fact that they spent most of their 9 a.m. to 6 p.m. shifts talking are believed to be factors in why so many workers became infected. Government officials said Tuesday morning that most workers did not wear face masks inside the office.

Metanet Mplatform, the call center’s operator, which specializes in outsourced customer call services, said Tuesday that many workers who tested positive for the coronavirus so far sat near each other on one side of the office on the 11th floor.

A spokesperson for the company said he was “baffled” by the infections because the headquarters had told workers at the Sindorim call center to wear face masks at all times and even distributed the popular KF94 face masks to them multiple times, including once last week when five face masks were given to each employee.

The company also said it examined the body temperatures of all workers twice a day and sent home anyone who became sick. Cluster infections have appeared several times in Seoul before, but smaller than at the Sindorim call center. At least 15 infections were traced to Catholic University of Korea Eunpyeong St. Mary’s Hospital, 13 were connected to an apartment building in Seongdong District, eastern Seoul, and seven were traced to an office of a fashion company in Myeong-dong, Jung District, central Seoul.