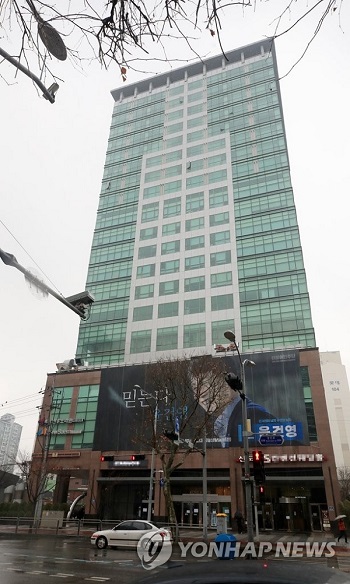 A call center in southwestern Seoul has emerged as the biggest COVID-19 infection cluster in Korea's capital Tuesday, prompting the city government to brace for a potentially mass transmission of the new coronavirus.

A high-rise in the neighborhood of Sindorim was closed down and disinfected late Monday after workers at a call center on its 11th floor were confirmed as patients, according to Guro District, which oversees Sindorim.

On Tuesday, the Seoul city government reported 26 new cases, bringing the total to 156 as of 10 a.m. The number is higher than the 141 reported by the Korea Centers for Disease Control and Prevention, which was tallied at midnight.

The city said that 22 cases were attributed to the outbreak in the call center, but the numbers are feared to top 40 when cases linked to the call center but detected in the wider metropolitan area, such as Incheon and Gyeonggi, are included.

"All 207 workers have been quarantined and inspections are taking place. This is the biggest infection reported in Seoul so far, and we are looking at this in a serious and grave manner and striving to prevent additional cases," Seoul Mayor Park Won-soon said in a press briefing.

The city government said it has launched an emergency taskforce of 30 researchers to look into the outbreak and has urged residents in the building, which has 19 floors and six basement levels, to isolate themselves.

In addition to the offices and commercial facilities in floors one to 12, 140 residential flats are located on the top seven floors of the building in Sindorim, one of the busiest areas in southwestern Seoul, where subway lines No. 1 and 2 pass through.

An inspection center has been set up on the ground floor of the building for residents and employees to be screened for the new coronavirus, the city said.

The latest cluster of infections was identified at the call center operated by Metanet Mplatform, a call center whose clients include the local affiliate of global insurance group Chubb.
Nearly 80 percent of more than 7,000 infections reported in Korea are attributed to group transmissions, according to KCDC data.

While the minor religious sect of Shincheonji is associated with more than 60 percent of all infections, infections have also occurred in minor clusters in hospitals, religious services and even Zumba classes.

In Seoul, 14 infections occurred at the Eunpyeong St. Mary's Hospital, a general hospital in northwestern Seoul, and 13 in a residential complex in the Seongdong District as of Monday, according to the KCDC.