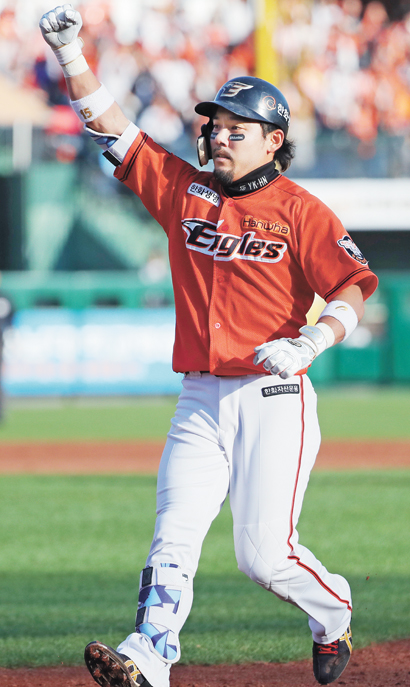 Hanwha Eagles¡¯ captain Lee Yong-kyu celebrates during the first round of the playoff game against the Kiwoom Heroes at Daejeon Hanbat Baseball Stadium on Oct. 20, 2018. [YONHAP]

After missing the entire 2019 season, Hanwha Eagles captain Lee Yong-kyu is ready to get back on the field and lead the club to the postseason.

Everything was looking just fine for Lee, until the start of the 2019 season.

Following the Eagles’ impressive third-place finish in 2018, he re-signed a two-year contract with an option of another year as a free agent on Jan. 30, 2019.

Although he was among the older players on the Eagles’ roster, he was still needed on the club’s outfield and as leadoff batter, as he finished the 2018 season with a 0.293 batting average with 144 hits and 30 stolen bases.

However, once the club returned from spring training and right before the exhibition games, it was reported that Lee has requested the club release him for a trade. Lee had a one-on-one talk with manager Han Yong-duk and another talk with the club’s front office.

After the Eagles denied Lee’s request, he decided to go public and announced that the club was blocking his transfer. The Eagles reacted to this by suspending him indefinitely for disrupting the team’s environment.

Lee’s 2019 season was then spent in front of the television, instead of out on the field. And it was clearly lose-lose for both Lee and the Eagles. His absence impacted the team significantly as it finished ninth in the regular season with 58 wins and 86 losses.

Eventually, in September, the Eagles lifted Lee’s suspension and now, he’s ready to make his return as the club’s captain. Rather than requesting the club for a trade, he is now thinking of ways to make the team better, fulfilling his role as the bridge between the club and the players.

Below are edited excerpts of Lee’s interview with Ilgan Sports.

Q. This is your first spring training as a captain. How’s the atmosphere?

A. The atmosphere is starting to become really great. Overall, the young players are working really hard, which makes the team’s atmosphere even better.

The players chose you as the captain. Why do you think they made such decision?

I think that the young players thought that my personality could work out well with the club in terms of telling them what the players need. You don’t really need special abilities to be a captain. From when I was a rookie to now, I can proudly say that I’ve worked my hardest on the field. I think the younger players viewed those aspects of me positively.

Did you expect yourself to be the captain?

I didn’t. Even when I heard that I was nominated as one of the candidates, I didn’t think that I would win. I just didn’t withdraw because I thought it wasn’t right of me to do so when the players chose me as one of the candidates. But I never thought about wanting to become captain. So I was really surprised when my name was called.

What was the whole process of selecting a captain?

Before the voting, our manager asked the candidates to make our final speech. And I just said, “Voting for a captain isn’t a fan voting where you choose someone that you are close to or choose a senior player who treats you well. Since we’re voting for a person who can lead the team well and the club is giving the authority of captain to that player, think about it carefully and vote.” I meant to tell them to think about the team first rather than considering it as a joke, but I literally didn’t expect myself to win. Not even 1 percent.

You’ve been gone for the entire 2019 season so I’m assuming that you would want to prove something this year. But on top of that, you’ve been selected as the Eagles’ captain. Do you feel overwhelmed?

I don’t feel much pressure in being the captain, but I am worried about playing this season, considering my one-year absence. It would be great if I play well, but if not, then I will get twice the criticism as I did in the past. But that is something I have to bear. If I lost the competitive edge because I didn’t play for a year, that will just be an excuse. Whether I play well or not, that’ll be my skill. My job is to prepare well so I can play well.

What were you focusing on throughout spring training?

Since I didn’t play for about a year, I’m trying to hit better by changing my batting form. I used to have a big swing, but now, I’m focusing on making it smaller while training.

At some moments, I think I tended to push the ball, starting with my swing. It should have come more naturally, but I started to think that I may be forcing myself to do it. It was definitely different from when I was [playing] well. So I thought about that, and although my old habits still come out, I’m trying to change. Even if it’s a same foul, I’m hoping to see it from a stronger swing. Other than that, I’m not doing so poorly, condition wise. I think I’ll be able to prepare the season well, without seeing any trouble.

Toward the end of last year, you attended the training league for rookies. This showed how determined you were to make a comeback. How was it?

I attended the training league, for the first time since my debut, because even back when I was a rookie, I don’t go. Rather than trying to show something to the younger players, I was just trying to work hard on myself.

Honestly, I thought about a lot of things before I went. Thoughts like if it’s alright for me to go and what I would do if I went.

I’m sure you had a lot of concerns returning to the team, but you got selected as the captain. Were you relieved about the decision?

To be honest, while I was gone for about a year, I kept great relationships with the players so I wasn’t too concerned about getting along with our teammates. Instead, I felt sorry for the players when they tried to check on me to see if I was O.K. Making me the captain was a message [from everyone] telling me to work harder on and off the field this year.

Once you were selected as the Eagles’ captain, you came up with this thumbs up celebration. What made you come up with that?

Last year, I was a viewer [watching the games through TV rather than a player]. As a baseball fan, when I saw a team doing its own celebration, it looked great. I think that kind of team atmosphere makes the team brighter. Since our team was ranked toward the bottom of the standings since the start of the season, [our team] atmosphere seemed a little depressed. But if we had that celebration during games, I thought it could motivate the players to focus more when our players are throwing their pitches or at-bats. Also, I felt like we weren’t doing much for the fans, while they’re trying really hard to root for us. Coming up with a celebration that both the fans and the players can do together is enjoyable. When the fans come out to the stadium it opens up ways to communicate with them. I think it’ll be great if the fans also put their thumbs up when we do well.

What was the players’ reaction when they first heard about the celebration?

At first, I intentionally didn’t tell everyone. I just asked older players like [Kim] Tae-kyun to do it to the players once in a while when they played well. Then, once the other players started following them halfway through spring training, I was going to tell them that this is the celebration we are going to do this year. [I didn’t tell them at first] because if I did right from the start, then it would have felt like I was forcing them. But our players found out about it a little too early. Now, when one player puts their thumbs up, then others do the same.

Why did you choose the thumbs up motion?

I think there are a lot of meanings behind that motion. It can be seen as “cool” or “job well done.” I didn’t want us to look like we’re just fooling around. I was thinking about different motions that would look simple but modern. In the end, it came to this.

What is the team’s goal and your personal goal this season?

As for the team, our goal is to play fun and persistent baseball. To do so, I’m trying to change, too. I told our players that even if they hit a grounder, they should run as hard as they can [to the first base]. Once we start working hard, we build trust amongst the players and play baseball in a brighter atmosphere. This will also make fans want to be at the stadium more. I want to hear [people say] Hanwha’s baseball changed a lot and that the team is more energetic. As for my personal goal, I don’t really have big ambitions. If I can hear “Lee Yong-kyu played very well in 2020,” then I think that would be the biggest success.