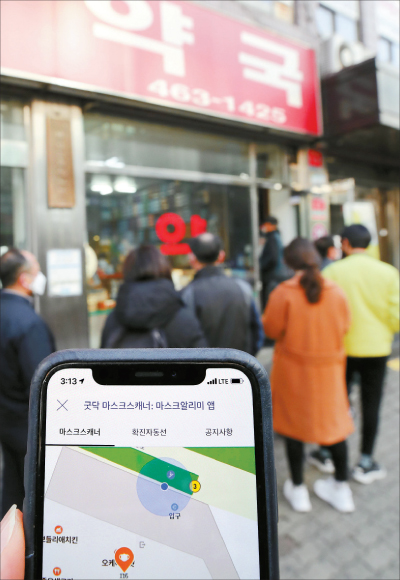 Ten of these online services launched Wednesday morning, after the government requested that developers wait until after it rolled out the application programming interface (API) for the data the night before.

The 10 services all use color-coded maps to allow users to find out how many masks remain at each designated seller.

At the moment, the government is limiting the number of masks individuals can buy to two per person per week at government-designated locations.

By Wednesday, the Ministry of Food and Drug Safety said nearly 6 million units of face masks out of a total of 7.8 million were provided to pharmacies nationwide and at Hanaro Mart stores (except Seoul and Gyeonggi) and post offices in smaller regions.

The per-person limits on mask purchases previously applied only to pharmacies, but post offices began following suit as well on Wednesday.

Since late last month, the growing epidemic created skyrocketing demand and subsequent shortages of protective face masks throughout the country. Despite government assurances that it would stabilize the supply, public frustration has remained high as people queue for hours to buy masks at designated sellers, only to leave empty-handed.

To save people from fruitless hours spent waiting on designated vendors, the NIA, along with five other government entities, made the sales data of government-secured face masks open to the public. The data is updated in real time as pharmacies and other mask vendors manually input their sales figures to the system. The NIA then codifies the data as part of its open API.

Naver and Kakao have announced they will incorporate the data into their own platforms soon, and Naver said it had launched a beta version of the service by Wednesday afternoon.

Shortly after the launch, the services experienced traffic overflow, but the issue was resolved by the afternoon.