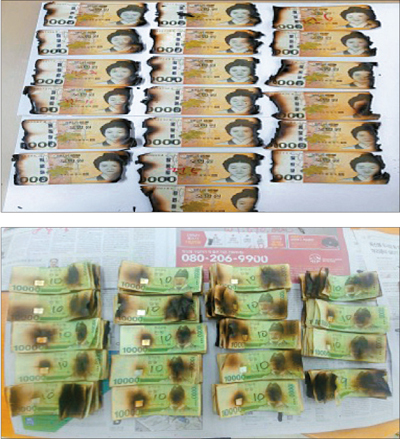 Banknotes are burnt after being microwaved. Notes can be replaced depending on the level of damage. [BANK OF KOREA]

That may sound obvious, but the Bank of Korea is worried that people will do just that. So it issued a press release Wednesday to advise against the practice.

It seems that people have been showing up at their banking institutions with burnt banknotes after trying to disinfect the notes in the microwave.

The central bank, which is normally focused on such serious matters as monetary policy and systematic risk, is concerned that the at-home hack will not kill the coronavirus and that the bills could catch fire.

Just don’t do it, the bank says.

According to the bank, Mr. Lee, who lives in Pohang, North Gyeongsang, microwaved 1.8 million won ($1,500) worth of 50,000 won bills fearing a coronavirus infection.

After most of the 50,000 won bills were blackened, crispy and carbonized, Lee asked a bank to exchange the damaged notes with fresh currency. The bank said that only two of the notes were in good enough shape to be replaced.

To prevent the spread of the coronavirus through the widely circulated banknotes, the central bank is keeping money collected from financial institutions in quarantine for at least two weeks.

The Bank of Korea has strict terms for the replacement of damaged money. If three-quarters or more of a bill remains, the customer will receive a full refund of the face value.