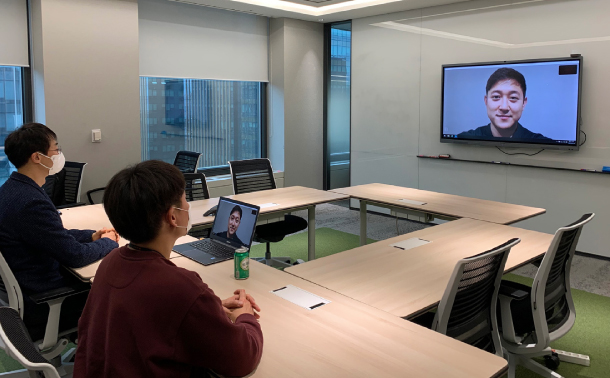 As workplaces aim to put space between employees amid the coronavirus outbreak, the social distancing practices are also extending to hiring procedures as Korean companies replace face-to-face interviews to video sessions.

The number of confirmed coronavirus patients began soaring locally in February, prompting companies to implement increasingly drastic measures. Some have banned the entry of outsiders, and other have postponed or canceled plans to recruit new employees.

In a survey conducted by job search website Career earlier this month, 75.7 percent of job-seeking respondents said the new coronavirus had caused a crisis in the job market. Seven out of 10 said they had experienced an interview or a test being postponed or canceled after the outbreak.

Korea’s largest oil refiner SK Innovation halted all recruitment procedures, in line with preventive measures that included asking staff to telecommute from home. But the company announced Wednesday it will resume interviews through videos and chat bots.

The method shift was possible due to SK’s existing efforts to digitalize tasks in human resources, the company explained. The chat bot which answers candidates’ questions about the recruiting process was introduced last year and was recently upgraded.

Apart from safety, SK believes the no-contact interview method will eventually contribute to higher efficiency as well, saving time for interviewers who previously had to travel to offices and production sites nationwide.

“We’ve conducted video interviews with experienced candidates if necessary - for example, if he or she was living abroad. But for new entries a lot of the procedures were done inside the company including the coding tests,” a Line spokesman said.

Not all Korean companies are fully digitizing their recruiting practices, but many are implementing some of those measures.

LG Electronics is conducting video interviews for experienced job candidates who passed the first step of application screening. Kakao has done the same for about 50 experienced applicants from late February. CJ Group says it will adopt video interviews as well for some interviewees from April.

Instead of giving up on face-to-face interviews, some companies have turned to YouTube to provide tours of their campus for graduating students. In Korea, such tours where HR managers of major companies explain hiring procedures are regular sessions in universities ahead of large-scale open recruiting events that take place twice a year.

Korea’s third-largest conglomerate SK Group announced it would stop the practice this year. Instead, it will host an information session online. Lotte Group recently opened a YouTube channel named “L-RecruiTV” which uploads vlogs from staff working across various divisions.

Despite these efforts, a majority of recruiting plans remain postponed. Job search website Incruit pointed out that the current halt in procedures will eventually affect companies’ entire hiring schedules throughout the year. That includes internships and openings for the year’s second half, which is normally decided early in the year.

“A small volume of recruits in the year’s first half may result in increased hires in the year’s second half,” Incruit CEO Seo Mi-young said. “This will come as a relief for job seekers, but from the HR manager’s perspective, schedule delays are a burden, so it seems they’ve decided to be more proactive about adopting online methods this time.”