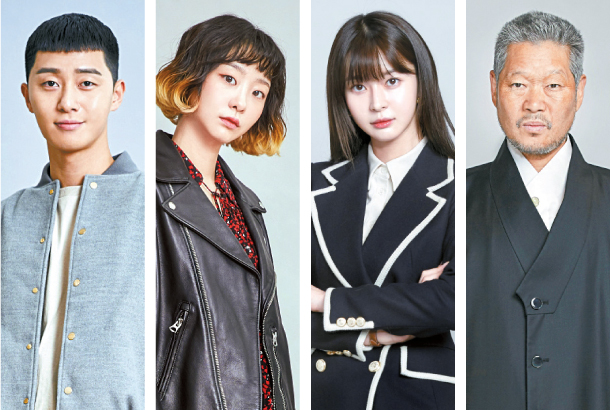 “The victim of a big company’s abuse of power overcame a hardship and managed to open his own business,” Jo Yi-seo says at the beginning of episode 11 of the hit drama series “Itaewon Class” currently airing on JTBC. “It’s an inspiring story. And everyone loves success stories like this.”

What the character says has proven to be true. Based on the popular web comic of the same name, the story is a simply structured revenge story of a young man and his start-up pub fighting against his powerful opponent Jang Dae-hee, the perpetrator of his father’s death who is also a CEO of Jangga, the largest food conglomerate in Korea.

But a successful novel or web comic with a devoted following doesn’t always translate into a hit on television or in theaters. Dedicated fans can be picky about how their favorite characters are portrayed on screen and sensitive to changes in the plot.

But the potential success of “Itaewon Class” may have been previewed when fans rejoiced at the news that the web comic’s cartoonist, Gwang Jin, would be participating as a scriptwriter for the drama series.

After the first episode aired at the end of January, fans took to the web to say that they were blown away by the story and the characters. What fans were most amazed by was how well the actors portrayed their characters.

The latest episode drew a 13.4 percent viewership rating, an impressive rating for a show on cable television. The channel has not had such high ratings since the finale of the hit drama “SKY Castle” last year.

Bringing the comic to life

The original characters in the webtoon “Itaewon Class.” Fans of the web comic have complimented the cast’s striking resemblance to the two-dimensional characters. [SCREEN CAPTURE]

The physical similarities of actors Park Seo-jun and Kim Da-mi to the main characters Park Saeroyi and Jo Yi-seo were among the first details that fans of the web comic praised about the show - especially their hairstyles.

Park uploaded a video on his YouTube channel showing how he cut his hair to resemble the iconic cropped hair of Saeroyi. To maintain the hairstyle, which remains unchanged until the end of the web comic, Park says that he has had to cut his hair every four days for the past six months. During a press conference, the actor advised viewers not to copy his hairstyle because of all of the work it requires.

Despite his warnings, social media has flooded with pictures of people showcasing their versions of Saeroyi’s hairstyle.

Yi-seo’s iconic bobbed haircut with bleached ends also earned approval from fans of the original web comic. Although the character in the comic starts with a blonde bob hair, fans say that the character’s look in the show suits the actor better while still retaining the character’s image.

“I think the actors pull off the character’s looks around 80 to 90 percent of the way,” said 26-year-old Pyo Soo-jin, an avid web comic fan. “Kim is absolutely perfect as Yi-seo - she’s so adorable. I also love how other characters such as Jang Geun-soo and Jang Geun-won also match how they look in the comic series. Park Seo-jun is also okay as Saeroyi, but I think he still lacks the solidness that the character possesses. ”

Another 26-year-old fan of the web comic, Son Mi-ri, said that she immediately latched onto the drama once its started airing.

“I had such fun reading the web comic that I immediately started watching the drama even though I don’t really watch much television. I think the biggest attraction of the series is its perfect cast - each character’s charisma comes through the screen,” Son said.

Culture critic Jeong Deok-hyun classified the protagonist Saeroyi as “an exception from the usual representation of youth nowadays.”

“In most stories, young people are portrayed as either frustrated or discouraged characters,” he said. “But Saeroyi is different. He is determined - he has a 15-year plan. Although he has to start from the bottom, he doesn’t give up, and works to achieve his goal, no matter how difficult it is to get there. [Comparing that to] Jang Geu-rae from [the hit 2014 drama series] ‘Misaeng’ - he struggles to adapt to the traditional system and eventually submits to it, whereas Saeroyi breaks free from the system, steered by only his own principles on his way to his goals.”

But fans of the web comic aren’t the only ones tuning in to “Itaewon Class.” As it turns out, Saeroyi is apparently a star among older viewers as well.

“My mom and I are watching the show together, and she tells me that I could learn a thing or two from Saeroyi,” reads a comment on clip of the show uploaded on YouTube.

“I like to see how Saeroyi overcomes his hardships and steadfastly moves forward,” a viewer in her fifties who wished to remain anonymous said. “I can also see that he is a good leader. He cares for his staff, who are considered social minorities - such as a transgender woman and an ex-convict - and guides them wisely.”

According to culture critic Kim Sung-soo, Saeroyi’s principles - justice, his strict standard of right and wrong, and revenge - are very familiar and appealing to older viewers.

“These beliefs were very popular in the patriarchal society ruled by men,” Kim said. “But the older generation lived through some of the most turbulent eras in Korean history. They went through the June [1987] Democratic Uprising, and after that, everything changed so quickly. Would they have been able to stand by their values? It would have been hard for them. They might have made other choices, and may be living vicariously through Saeroyi.”

Another viewer in her fifties, Song Ye-rim, says she was hooked by the gripping story.

“I can concentrate on the story regardless of its development,” Song said. “Although it may be a revenge story, the protagonist still does everything while standing by his principles. And I liked that the story isn’t too centered around romance.”

“All in all, it’s a revenge story, and that’s a very conventional and familiar genre that everyone likes,” Jeong said. “But what’s fresh about this one is that it’s a new style where the protagonist doesn’t perish along with their opponent. He doesn’t do whatever it takes for him to get his revenge. Instead, he plans it thoroughly and realizes his plan step by step, while still being righteous and taking control of his goals.”