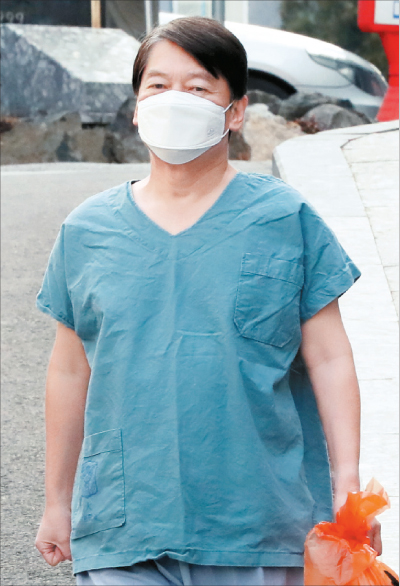 Ahn Cheol-soo is in Daegu, volunteering in the fight against Covid-19. [YONHAP]

Ahn Cheol-soo, the chairman of the People’s Party, rejected Wednesday a merger proposal from the Future Korea Part (FKP), a satellite offshoot of the largest opposition United Future Party (UFP).

“I will steadily march the path of pragmatic, centrist politics,” the two-time former presidential candidate said in a message released through his chief of staff. “I am currently volunteering as a doctor in Daegu, so I am not in a situation to meet someone for political purposes.”

On Tuesday, FKP Chairman Han Sun-kyo proposed the merger to Ahn in an interview with the Chosun Ilbo. “I will soon visit Daegu and propose a merger to Ahn,” Han said. “If Ahn wants, we can co-chair the party, or he can be the sole chairman.”

Han said he made the proposal to unite the two parties to defeat the ruling Democratic Party (DP) and the Moon Jae-in administration in the April 15 general elections.

Ahn, a doctor-turned-software mogul-turned-academic, entered politics in 2011 with delirious support from young people. He made two unsuccessful runs in the 2012 and 2017 presidential elections. After a humiliating defeat in the Seoul mayoral election of June 2018, Ahn left politics, but declared a political comeback in January.

Since the novel coronavirus hit Korea, Ahn stopped almost all political activities, went to Daegu - the country’s epicenter of the outbreak - and has been volunteering as a doctor since March 1, much to the benefit of his party’s approval rating.

The People’s Party, which refused to participate in the conservative merger to form the UFP and recently decided to field only proportional candidates, is currently the main rival of the FKP as their target voters somewhat overlap.

Han said Wednesday he will recant his proposal for now. “I have long planned to meet with Ahn,” Han told the JoongAng Ilbo. “Ahn is volunteering in Daegu, and it will look awkward for me to visit him there and make a political proposal. I won’t go there anytime soon.”

“We received a three-page document from the UFP,” Gong said Wednesday. “Chairman Han gave it to the committee as a reference. It was a list of rookie politicians recruited by the UFP. It was not a request. It was just an offering of information. We will maintain objectivity and fairness.”

The FKP will review applications by the end of Wednesday and conduct interviews by Sunday. It will create a list of up to 50 candidates for proportional representation. The party’s electoral college will vote on the list, and the Supreme Council will finalize it before an official announcement on Monday.

Meanwhile, the FKP demonstrated that proportional representation can be a lucrative political business. The party said it earned over 1.5 billion won ($1.26 million) from 531 applicants.

Each applicant is required to pay an application fee of 1 million won and membership fee of 2 million won. Those under 40 years old, the disabled, defectors, foreigners, independent activists and Korean War veterans were given a 50 percent discount. According to the party, about 50 were eligible for the discount.

“The membership fee won’t be refunded even if the applicants fail to win nominations,” said an FKP official. “If an applicant wins a nomination, he or she needs to pay an extra 15 million won of membership fees when registering the candidacy with the National Election Commission.”

During the 2012 general election, the Saenuri Party, a predecessor of the UFP, received an application fee of 500,000 won, and 616 applied for proportional representation. In 2016, the party required 1 million won for an application fee and 3 million won for a membership fee. At the time, 300 applied for proportional representation candidacies.