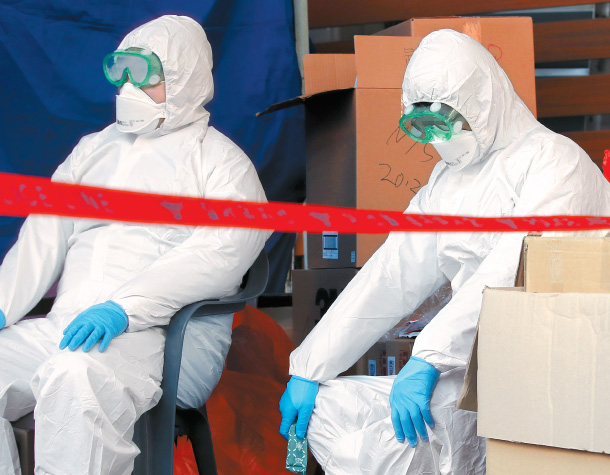 Medical workers take a rest at a special testing center in Sindorim-dong, Guro District in western Seoul, on Wednesday. [YONHAP]

At least 93 cases of the new coronavirus have been traced to a call center in western Seoul, and local health officials warned Wednesday that the capital’s largest infection cluster will most likely grow.

The Korean government said Wednesday it was planning a so-called infection management guideline for densely populated workplaces with high risks of mass infection - such as call centers - and recommend they allow employees to work from home or come to the office on staggered schedules to prevent the spread of the virus. Seoul Mayor Park Won-soon said on a CBS morning radio show Wednesday that his office was scheduled to meet with call center operators to urge them to follow government health guidelines, hinting he may force the establishments to shut down if they refuse to abide by the rules. 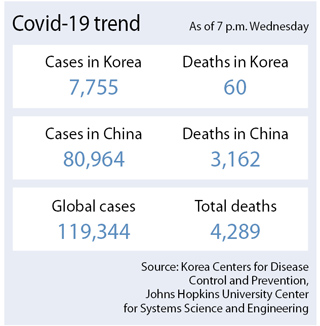 The cluster in Sindorim-dong, Guro District in western Seoul was reported as nationwide infections have been drastically dropping, raising hopes that the spread of the virus in Korea was finally under control after three weeks of rising numbers in Daegu and North Gyeongsang.

The Korea Centers for Disease Control and Prevention (KCDC) announced Wednesday morning that 242 new infections were counted on Tuesday, bringing Korea’s total infections to 7,755. Tuesday’s daily count was almost double the figure reported Monday, when 131 new cases were tallied. Still, those figures are a huge drop from last week, when daily infections numbered between 500 and 700.

Among Tuesday’s new infections, most were still from Daegu, with 131 cases coming from Korea’s fourth-largest city in the southeastern part of the country, where a church of the controversial Shincheonji religion was the epicenter of Korea’s outbreak. Seoul had 52 new infections, and the province of North Gyeongsang, which surrounds Daegu, saw 18 new infections.

Seoul’s infections account for only 2.5 percent of nationwide cases, while Daegu accounts for 74.7 percent and North Gyeongsang 14.6 percent, according to KCDC statistics.

The death toll stood at 60 by Tuesday midnight, six more than the previous day. A total of 288 people have fully recovered from the coronavirus, 41 more than the day before. 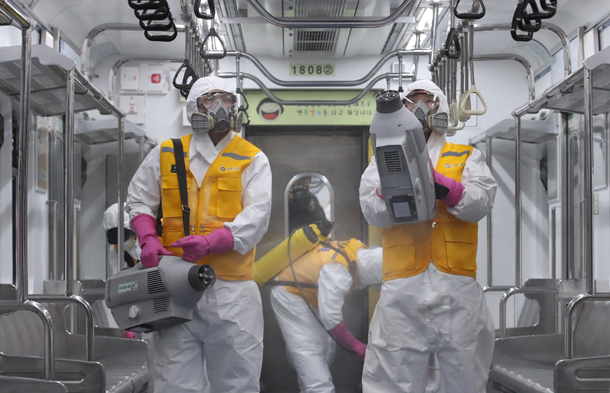 Quarantine workers disinfect the interior of a subway car at the depot in Seongdong District, eastern Seoul, on Wednesday. [YONHAP]

Seoul Mayor Park, however, didn’t rule out the possibility that the Christian sect was the source of the infections, saying Wednesday that a list of Shincheonji adherents in Seoul, which his office received from the church, was not believed to be the full list, implying that the church omitted some worshippers on purpose.

Local officials counted 64 cases of the coronavirus linked to the Sindorim call center as of 2 p.m. Tuesday, and that figure rose to 93 at 10 a.m. Wednesday. Of that figure, Seoul residents accounted for 65 people, while the rest were from the neighboring city of Incheon or the province of Gyeonggi.

Of Seoul’s 65 cases, 50 were identified as employees of the call center who live in various parts of Seoul, while 15 were said to have had close contact with them, such as their relatives. Thirteen live in Guro District, the highest among Seoul’s 25 districts.

Of the 28 cases outside of Seoul connected to the call center, 15 live in Incheon while 13 live in Gyeonggi, health officials said.

At least 70 cases of the 93 in total are employees of the call center who all worked on the 11th floor of the 19-story Korea Building, and no infections have been traced yet to the seventh, eighth and ninth floors, which were also used by the call center, though virus tests are ongoing for every employee on all four floors.

The close seating at the call center plus the fact that the workers spent most of their 9 a.m. to 6 p.m. shifts talking are believed to be factors in why so many workers became infected. Government officials said most workers didn’t wear face masks inside the office.

Officials from the KCDC and Nowon District Office in northern Seoul said the first patient diagnosed at the call center was a 55-year-old Korean woman who lives in Nowon and doesn’t appear to have any links to the Shincheonji religion or visited China or Daegu or North Gyeongsang recently.

According to health officials, the patient, who works at the call center, felt a cold come on last Friday and tested positive for the virus on Sunday. Upon learning that the patient works in Guro District, the Guro District Office informed the call center to quarantine all its workers in their homes, get them tested and shut down the office.

Seoul Mayor Park said Wednesday on the radio show there were 417 call centers in Seoul and 745 in total throughout the nation. He said their work environments made employees particularly vulnerable to transmissions of the virus. The mayor said there are 413 employees at the 120 Dasan Seoul Call Center, which is run by the Seoul Metropolitan Government, and that starting next week, half will work from home.

Officials on the southern resort island of Jeju scrambled to perform contact tracing for a middle-aged female worker at the call center Wednesday when it was revealed she visited Jeju last Saturday for about 12 hours.