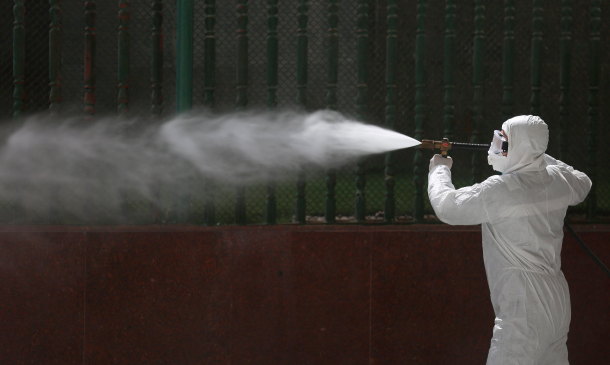 A worker in Iraq sprays disinfectants as a precaution against the coronavirus in the shrine of Imam Ali in Najaf, Iraq, on Sunday. [AP/YONHAP]

A Dean Koontz novel that has everyone talking after some readers claimed it predicted the Covid-19 outbreak 40 years ago will be available in Korean this spring.

“We’re working on the translation currently and hope to have it out as early as April,” said an employee of Dasan Books, a publisher based in Paju, Gyeonggi, on Wednesday. “You’ll be able to see a copy in bookstores before summer.”

“The Eyes of Darkness” written by Koontz in 1981 is about a mother who investigates strange signs that her dead son may in fact be alive.

Passages from the book, however, have been linked with the coronavirus, or Covid-19, outbreak, for its mentions of Wuhan, the city in China where Covid-19 infections were first reported, fueling a conspiracy theory that the virus may have been a result of a lab experiment.

“They call the stuff ‘Wuhan-400’ because it was developed at their RDNA labs outside of the city of Wuhan, and it was the four-hundredth viable strain of man-made microorganisms created at that research center,” reads a sentence in the thriller. 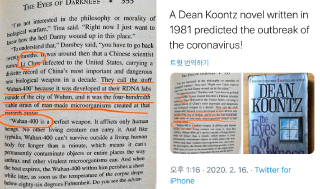 Online conspiracy theorists have linked passages from Dean Koontz’s “The Eyes of Darkness” (1981) to the coronavirus outbreak. [SCREEN CAPTURE]

“It says in the novel that a serious illness that causes symptoms like those of pneumonia will spread throughout the world around 2020,” wrote a Korean Twitter user on Feb. 27. “And the illness is called ‘Wuhan-400.’”

“How is it that a novel could have predicted this 40 years ago?” wrote a user surnamed Kim on Facebook on Feb. 28.

Several YouTubers have used alleged passages from Koontz’s novel and raised conspiracy theories about the disease being an outcome of a lab experiment in China. A video uploaded to the “Lee Young-don TV” YouTube channel on Feb. 19 discussing the theory has been watched by more than 156,000 people as of Thursday.

The contents of the book described by some netizens seem to hold similarities at face value with the current outbreak of Covid-19, which has infected more than 126,000 people worldwide and has killed more than 4,600 people as of Thursday.

But a closer look at the book places the allegations in a rather weak light.

“The additional page present in some claims suggesting an outbreak ‘around 2020’ is from a different book,” Reuters reported on Feb. 28.

The sentence often cited by users online says: “In around 2020 a severe pneumonia-like illness will spread throughout the globe, attacking the lungs and the bronchial tubes and resisting all known treatments.”

The sentence is actually from “End Of Days: Predictions and Prophecies About the End of the World” by Sylvia Browne, Reuters reported.

There are other discrepancies. The Wuhan-400 disease in Koontz’s book has a 100 percent death rate and incubation period of just four hours. Covid-19’s mortality rate is less than 1 percent outside of Wuhan, China, and its incubation period is known to be between two to 14 days. 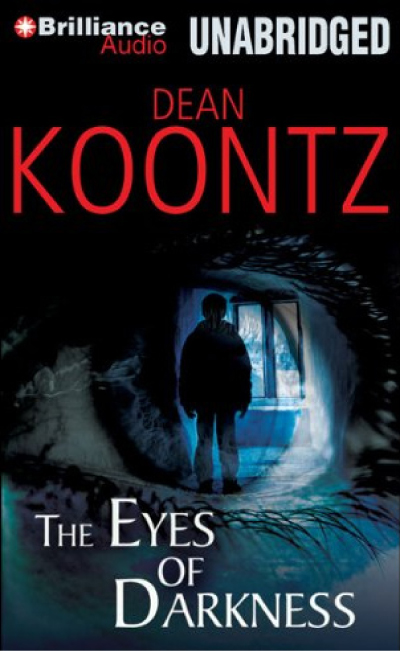 Perhaps most critical among the findings was that the virus was not called Wuhan-400 in the first edition of the book. It was called “Gorki-400,” fictionally originating from a Russian city of Gorki.

“The Russians tested it on God knows how many political prisoners,” a page from the novel’s first edition reads, according to a report published by the South China Moring Post on Feb. 20.

The report said that the change came when the book was re-released in 1989, after the collapse of the Soviet Union.

“The switch from Gorki-400 to Wuhan-400 in the book was a literal cut and paste and appears to reflect the shift in mentality after the Cold War,” South China Moring Post reported.

Still, all the hubbub about the novel in Korea has created interest in the prolific author.

“The competition to translate the book was fierce, especially after the novel became famous here for the links with Covid-19,” said an employee of Roadbook, which has previously published Koontz’s “The Whispering Room” (2017) and “The Silent Corner” (2017) in Korean. “But Dasan sealed the deal.”

Koontz, who lives in southern California with his wife, has written over 105 novels, many of which have been New York Times Best Sellers.