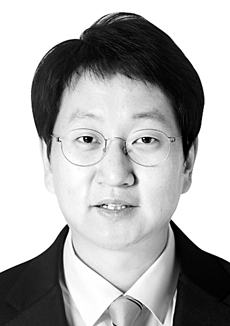 Lee Sang-eon
The author is an editorial writer of the Joongang Ilbo.

It was a time of frustration, anger, sadness, relief and futility, said a senior citizen who experienced the distribution of face masks at the pharmacy. The relief came when he got what he wanted. But he felt the futility after getting only two masks after waiting for over an hour under an umbrella. Smiling bitterly, he said, “I was reminded of my mother’s story of being anxious that the food ration would run out during the Korean War.”

Why do people have to wander around and wait in the cold in front of pharmacies to buy two face masks per week?

I am angry because it could have been avoided.

Fortunately, Korea has the capacity to manufacture more than 10 million masks a day thanks to the yellow dust and fine dust particulates from China that tormented Korea even before the new coronavirus outbreak in Wuhan. Factories and distributors worked hard to make them and stocked them up for the spring — the time of the fine dust attack from China. Hundreds of millions of face masks were sold to China before the Lunar New Year’s holiday. Some tourists bought them by the box. Officially, 700 million have been exported to China. There is an estimate that more than 1 billion units were sold to China through a countless number of Chinese peddlers and tourists.

Shortly after the Lunar New Year’s holiday, many Korean families had dozens that they had stocked up when masks were cheap. After the virus infections were confirmed, the government said it should not be a concern as long as people wore face masks and washed hands properly. Reusing mask was not recommended. Around that time, people who had to go out to make a living wore one or two masks a day. As masks became scarce after their price soared to more than 4,000 won ($3.3) per unit, I thought it was a temporary phenomenon due to manipulation by merchants. The president said there would be no interruption in mask supply. As it is only a face mask — not a vaccine or treatment — most people didn’t know it was an empty promise. 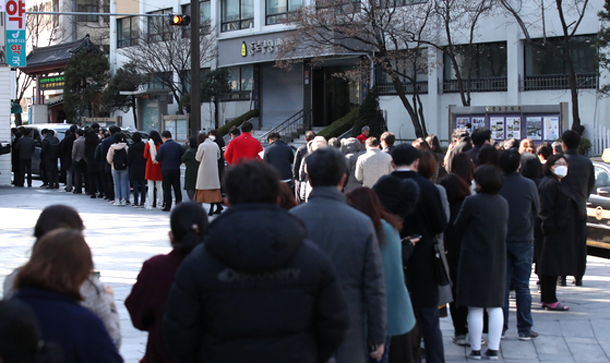 Even after the government announced a plan to offer two face masks to each person on a weekly basis to help them fight the new coronavirus, Covid-19, citizens continued queuing up for masks in front of a drug store in central Seoul Wednesday. [YONHAP]

Masks were used politically. Initially, they were used to reassure people. When voices calling for a ban on the entry of Chinese people grew, the government stressed the importance of wearing face masks. It highlighted the spreading of the virus within the country rather than blocking the virus inflow. Exports were not banned. As the number of our patients remained at 30 for several days, the government said, “The crisis will come to an end pretty soon.” Administrators took off their masks and asked the public to return to their daily routine. Pedestrians with bare faces increased soon.

Then, after the Shincheonji church outbreak, the government stressed the importance of face masks again. It tried to calm the uneasiness, but masks were already in short supply. The government blocked export to China, but it was too late. Then it recommended citizens to reuse face masks for three days or to use fabric masks instead. Then, people without symptoms were told all of a sudden that they didn’t need to wear masks. Shortly after, a group infection at a customer service center was reported. The government then backtracked on its instruction not to wear a mask.

Some say that people hardly wear masks in the United States and Europe. That is true. They don’t have the experience of wearing masks for cold. It is hard to find areas with such a cold climate as Korea. Unlike Korea, winter is wet, and they don’t need to block dry air. They don’t have the fine dust problem either. They don’t go to work or school if they have a respiratory disease such as the flu. If they go, they are seen lacking consideration and courtesy for others.

So they never wear masks throughout their lives unless they are doctors or construction workers. With such little demand, production and import volumes are also small. Their governments can hardly recommend their people wear face masks. That cannot be our standard. Unlike America and Europe, Korea is a highly dense society. Also, many people think it is a virtue to go to work even if they are sick. Until recently, masks were abundant here.

There is no guarantee that masks can save lives. But I have only masks to rely upon. People who trust the government become fools. An increasing number of patients die without getting admitted to the hospital.

I felt something ominous when President Moon praised Korea for offering an “exemplary case in prevention.” So, the government must not expect “concession with good faith” from our mask refugees. It must first thank the great citizens who wait in line.