The coronavirus outbreak has caused extreme volatility in the Korean stock market, and at least one group of investors - millennials - see opportunity in adversity.

An increasing number of millennials, the nickname for people born between 1981 and 1996, are opening stock accounts to “buy the dip, or scoop up shares pushed down by the crisis.

Sohn, a 28-year-old office worker, opened her first stock account last month. Friends told her that now was the time to buy low, after the local stock market was rattled by the coronavirus outbreak.

Sohn said her decision was clinched after reading of an 8.1 percent drop in Kospi in the last week of February. She deposited 10 million won ($8,300) in a stock account and started buying.

“This is my first stab at investment after landing my job,” she said. “Stock prices have fallen, and I’m confident they will recover. Most of my portfolio consists of blue-chip stocks.”

Others followed the advice of self-proclaimed investment advisers on YouTube. 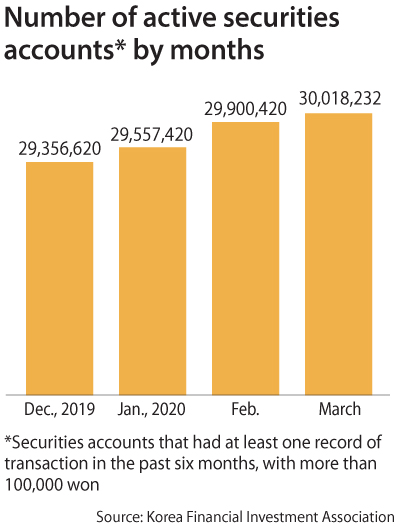 “I regret starting off with a brokerage account that has a small deposit limit,” said Kim. “I am going to keep an eye on the stock market, and if it falls even more, I am going to open a second account with bigger limits.”

With ultra-low interest rates on bank deposits and sky-high real estate prices, some millennials find stocks the only affordable investment option with the chance for big profits.

Hong, a 30-year-old office worker, told the JoongAng Ilbo he has put his entire monthly wage in an index fund based on the Kospi 200.

“I am going all in on financial investments,” Hong said. “With the salary I am making now, there is no way I can buy a house. My index fund is currently in the red, but I am hoping it will go up.”

While the Kospi falls, the number of active stock accounts is increasing rapidly.

An active stock account refers to accounts worth more than 100,000 won with at least one transaction within the past six months.

The total number of active stock accounts surpassed the 30 million mark on March 6, according to the Korea Financial Investment Association. 343,000 accounts were added last month alone, when local stocks were very volatile.

Analysts say that most new accounts were opened online by investors in their 20s and 30s.

“Around 60 percent of accounts opened with our firm were from investors in their 20s and 30s” said an official from KB Securities.

Online banks, where most customer are millennials, are doing a brisk business in stock accounts. Kakao Bank said close to 1.3 million brokerage accounts were opened when it first partnered with Korea Investment & Securities early last month. More than half of Kakao Bank users are millennials.