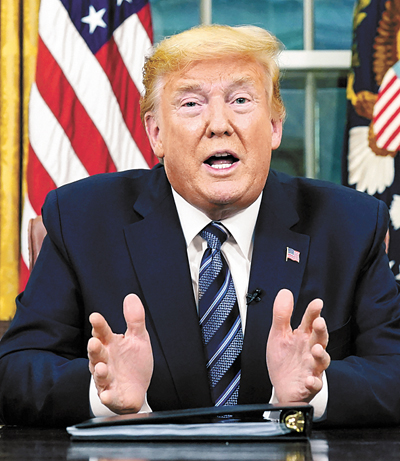 The United States may “re-evaluate” its travel warning for Korea and consider an early lifting of restrictions as the new coronavirus situation in the country improves, U.S. President Donald Trump said Wednesday.

Trump announced in a national address that the United States will be suspending most travel from Europe for 30 days starting Friday at midnight, to protect against the coronavirus pandemic. The entry ban excludes Britain and also exempts U.S. citizens and permanent residents.

“At the same time, we are monitoring the situation in China and in South Korea,” said Trump. “And, as their situation improves, we will re-evaluate the restrictions and warnings that are currently in place for a possible early opening.”

The U.S. State Department has a travel advisory of Level 4, the highest in its four-tier system, urging Americans not to travel to Daegu, the epicenter of the coronavirus outbreak in Korea. It has a Level 3 alert for the rest of Korea, urging Americans to “reconsider” visits to the country. Korea has in place in its airports a multi-tiered health screening of individuals flying to the United States, as requested by the Trump administration.

Trump said in his speech that the European Union “failed to take the same precautions and restrict travel from China and other hot spots” and that as a result, “a large number of new clusters in the United States were seeded by travelers from Europe.”

The United States already has a travel ban on foreign visitors who have recently been in China and Iran.

On Wednesday, the State Department issued a Level 3 global advisory urging U.S. citizens to reconsider travel abroad due to the worldwide impact of the coronavirus.

U.S. Defense Secretary Mark Esper also announced on the same day a 60-day restriction starting Friday for American troops and their families from traveling to and from countries classified as Level 3 by the U.S. Centers for Disease Control and Prevention, which includes Korea, Italy, China and Iran.

The World Health Organization (WHO) declared for the first time Wednesday that the outbreak of the new coronavirus, or Covid-19, is a global pandemic, which has found a foothold in every continent except Antarctica. A pandemic is described by the WHO as the “worldwide spread of a new disease” that affects large numbers of people.

There are more than 118,000 cases of the coronavirus in 114 countries and 4,291 deaths as of Wednesday, according to the WHO. It noted that “more than 90 percent of cases are in just four countries, and two of those - China and the Republic of Korea - have significantly declining epidemics.”

More than 80,000 cases are in mainland China, with over 3,100 recorded deaths there. However, there has been a marked slowdown in reported coronavirus cases in China after first being reported in Wuhan in Hubei Province last December.

He added, “Several countries have demonstrated that this virus can be suppressed and controlled.”

The last pandemic declared by the WHO was for a new strain of H1N1 influenza in 2009.

Korea saw exponential increases in new coronavirus cases in late February, mostly in the southeastern city of Daegu and surrounding North Gyeongsang. It has tested over 214,000 people, at times more than 10,000 people daily, to prevent the spread. Korea had over 7,800 cases as of Thursday and has seen a downturn in new cases in recent days.

A senior Korean Ministry of Foreign Affairs official told reporters Thursday, “President Trump’s remarks seem to reflect that the United States appreciates measures being taken by Korea” and its system to screen and contain the virus.

The official said it was “good news” that Korea was not included in the list of new travel bans by the United States and that Trump had signaled that existing restrictions could be eased.

He noted that Trump’s remarks signaling a possible lifting of travel restrictions on Korea “is consistent with and an extension of U.S. officials’ comments” that have indicated trust in the Korean government’s quarantine capabilities and transparency in data.

But the official added, “While it is encouraging that Trump did not include Korea and said restrictions being imposed may be lifted if the situation improves, rather than being too optimistic, we need to continue to be cautious and work to strengthen our quarantine efforts and pay close attention to the global trend.”

He noted, “The U.S. position is that it will be reviewing all options in order to decrease the speed of the spread of the virus throughout its nation” and that Seoul will “need to continue to observe the changing situation.”

As of Thursday afternoon, a total of 123 countries and territories have imposed entry bans or tougher quarantine procedures for people coming from Korea, according to Seoul’s Foreign Ministry. A total 49 countries or territories have entry bans on people who have recently visited Korea, or parts of the country most affected by the virus such as Daegu and North Gyeongsang.

There are 1,815 Koreans being quarantined overseas, with 1,343 in China and 408 in Vietnam, according to the Foreign Ministry as of Thursday. So far, 3,177 Koreans have been released from quarantine.

The Korea Centers for Disease Control and Prevention announced Thursday that travelers who have visited France, Germany, Spain, Britain or the Netherlands in the past 14 days will be required to undergo special entry procedures when entering Korea starting midnight Sunday.

They will undergo temperature checks, fill out a health questionnaire and be asked to install a self-diagnosis application on their mobile phones to keep track of any symptoms. They could also be quarantined.