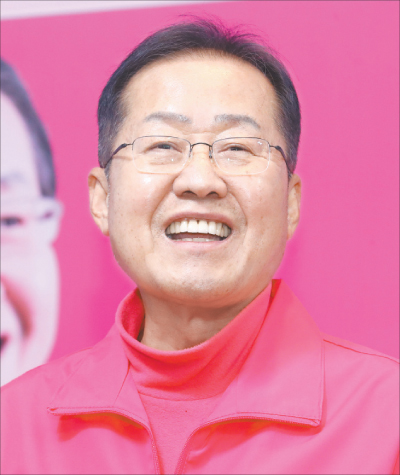 Hong Joon-pyo, former chairman of the Liberty Korea Party, the UFP’s predecessor, announces on Thursday he will run independently in Daegu. [YONHAP]

“I hear some complaints about the nomination process,” Hwang said during the party’s Supreme Council meeting on Thursday. “The Nomination Committee has worked hard. But some unfair cases were pointed out, and internal resistance is also growing. It is impossible to have perfect nominations for all districts, but we need some adjustments to win a landslide victory in the general election.”

Hwang then urged the Nomination Committee to reconsider some choices. He, however, did not elaborate on which candidates should be reconsidered.

In January, the largest opposition party recruited Kim, former National Assembly speaker, to head the nomination committee. He was promised full authority in the nomination process. Discontent, however, has grown over recent weeks inside the UFP about some nomination decisions. Some said Kim awarded candidacies to his allies and questioned the fairness of the decisions.

Later in the day, the Supreme Council formally asked the Nomination Committee to reconsider the candidate decisions for six constituencies. The committee was asked to reconsider nominations for Gangnam B of Seoul, Yeonsu B of Incheon, Dalseo A of Daegu, Buk-Gangse B and Jingu A of Busan and Geoje of South Gyeongsang.

Of the six districts, the committee decided to oust incumbent lawmakers in three constituencies and name new faces. The committee has disqualified Reps. Min Kyung-wook, Kwak Dae-hoon and Kim Han-pyo.

Lee Suk-yeon, vice chairman of the Nomination Committee, told reporters that the Supreme Council has the power to demand reconsideration. “When the request is made, the committee will reconsider based on the party’s constitution and regulations,” Lee said.

Kim already held a press conference on Wednesday to address the growing complaints.

“I feel extremely sorry [to those eliminated],” Kim said. “But we will all die, unless we change.”

“I will take all responsibility,” Kim said. “Even if you are not satisfied with nomination decisions, I appeal to you to support us for a greater cause to judge the Moon Jae-in administration.”

Kim said the committee tried to bid farewell to the past and recruit new faces to judge the Moon administration. “Because almost half of the incumbent lawmakers sacrificed their chances, we were about to cross the river to enter a new era,” Kim said.

Kim’s remarks on entering a new era reference the conservative party’s attempt to end its bitter history linked to the impeachment of former President Park Geun-hye. All lawmakers who had backed the impeachment and members of the Park loyalist faction that fought the process either left the party, announced they would not seek reelection or were disqualified.

Kim also said he did not nominate his allies. “You make such nominations when you want to become a boss,” said Kim. “But in one week, I will [leave politics and] return to an ordinary life.”

Kim, 79, is a renowned strategist. An economist and politician who has long promoted “economic democracy” in his career, Kim was the architect of President Park’s victorious campaign in 2012.

After his subsequent fallout with Park, Moon Jae-in, then chairman of the main opposition party, recruited Kim to reinvent the liberal party and lead its campaign for the 2016 general election.

“I have not accepted the offer [to head the UFP campaign] yet,” Kim told the JoongAng Ilbo on Wednesday. “The party is suffering from the aftermath of the nomination. I can only join them after this controversy is resolved.”

The UFP initially planned to launch its campaign committee last week, but the schedule was postponed. “Kim had made some demands, and they are affecting the launch of the campaign,” said a senior UFP official. “It is about nomination.”

Speculation is growing that Kim demanded nomination powers for some constituencies. “He should be given the power to reverse some nominations in Seoul, the capital region and some strategic constituencies,” said an aide to Kim. “If he won’t be given the power to make strategic decisions, he won’t join. He is not someone who will just be a puppet.”

When he was heading the DP’s general election campaign in 2016, Kim listed himself at the top of the proportional candidate list. Moon associates attacked the nomination, and Kim threatened to resign. The DP leaders, including Moon, apologized, and Kim returned to head the campaign.

Kim served as the DP’s proportional representative until he left the party in March 2017.

Rep. Kweon Seong-dong of Gangneung, Gangwon, also challenged the Nomination Committee’s decision to disqualify him. Kweon, a three-term lawmaker, was the chairman of the Legislation and Judiciary Committee of the National Assembly when the lawmakers passed the motion to impeach Park. He, subsequently, argued for the legislature in the Constitutional Court’s impeachment trial.

Kweon said it is unfair for the committee to disqualify him only for his role in the impeachment. “I had no choice but to perform my duty as the Legislation and Judiciary Committee chairman as required in the National Assembly Act,” he said, threatening to run independently if the committee refused to listen to his plea.