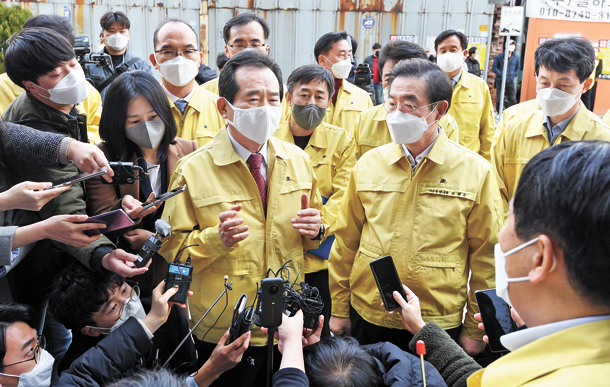 Seoul Mayor Park Won-soon vowed Thursday to focus his efforts on a neighborhood in western Seoul where at least 102 cases of the new coronavirus have been traced to an insurance call center.

The capital’s largest cluster of infections grew even bigger Thursday as local health officials said more employees at the call center tested positive, as did people they were in recent contact with.

But Park refrained from comparing the outbreak in Sindorim-dong, Guro District in western Seoul to the cluster in Daegu, where three-quarters of Korea’s total infections came from. He pointed out that some 200 people who actually lived in apartments on the 13th through 19th floors of the 19-story Korea Building tested negative for the coronavirus, implying that infections were mostly coming from the call center.

The call center used the seventh, eighth, ninth and 11th floors of the Korea Building, and most infections so far came from the 11th floor. 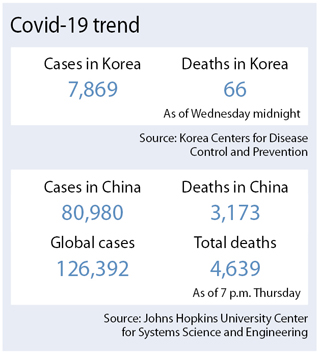 Of 102 infections traced to the Sindorim call center by 10 a.m. Thursday, 71 of the patients were residents of Seoul, 14 were from the surrounding province of Gyeonggi and 17 were from the neighboring metropolitan city of Incheon, said Park.

Tests on call center employees and other people who worked at other companies in the Korea Building were still ongoing Thursday.

Among the 102 cases, at least 80 were employees of the call center, while the rest were the people they were in contact with, including relatives, according to health officials.

At least two people who worked at a different company in the Korea Building have been diagnosed so far.

Incheon officials announced Thursday that a 34-year-old man who worked on the 10th floor of the building tested positive for the coronavirus and that his wife was being tested. A 27-year-old woman who worked for a different company on the ninth floor tested positive as well. Health officials believe both patients could have had contact of some sort with call center employees.

Close seating at the call center plus the fact that workers spent most of their 9 a.m. to 6 p.m. shifts talking are believed to be factors in why so many became infected. Government officials said most workers didn’t wear face masks inside the office.

The first patient diagnosed at the call center was a 55-year-old Korean woman who lives in Nowon District, northern Seoul, and worked on the 11th floor. Health officials still don’t know how she contracted the disease. She doesn’t appear to have any links to the Shincheonji religion, whose church building in Daegu was the epicenter of Daegu’s outbreak, nor has she visited China or Daegu or North Gyeongsang recently, officials said.

The cluster in Sindorim-dong was reported as infections in Korea have been drastically dropping after three weeks of rising numbers in Daegu and North Gyeongsang.

The Korea Centers for Disease Control and Prevention (KCDC) announced Thursday morning that 114 new infections were counted on Wednesday, bringing Korea’s total infections to 7,869. Wednesday’s daily count was less than half the 242 new infections reported Tuesday and a huge drop from last week, when daily infections numbered between 500 and 700.

Among Wednesday’s new infections, most were still from Daegu, with 73 cases coming from Korea’s fourth-largest city in the southeastern part of the country. Seoul had 19 new infections including those at the call center, and the province of North Gyeongsang, which surrounds Daegu, saw eight new infections.

By 10 a.m. Thursday, Seoul had a total of 219 infected patients, including 16 from both Eunpyeong District, northern Seoul, and Guro District, western Seoul. Seoul’s infections accounted for 2.69 percent of nationwide cases, while Daegu accounted for 74.56 percent and North Gyeongsang 14.53 percent, KCDC statistics showed.

The death toll stood at 66 by Wednesday midnight, six more than the previous day. A total of 333 people have fully recovered from the coronavirus, 45 more than the day before. The KCDC said Thursday afternoon that 59 patients were in critical condition.

Seoul Mayor Park announced Thursday in a press briefing that his office would designate the Korea Building and its surrounding area as a so-called contagious disease special support zone to focus logistical support on it.

A task force from the Seoul Metropolitan Government will lead an epidemiological investigation of the Korea Building and verify who visited there from late last month. Park said the city office would individually contact all visitors and ask them about possible symptoms.

The Seoul mayor said his office would also check on businesses in the capital with high risks of mass infection, such as call centers, clubs and internet cafes, to see whether they’re abiding by government health guidelines.

The city “will extensively check whether users [in those places] are wearing masks and keeping a distance from one another, and in case they’re not, [the city government] will immediately order the business to shut down,” Park warned.

On a similar note Thursday, the central government announced a set of guidelines to be distributed to businesses where people often keep a short physical distance to one another, including fitness centers, religious facilities and cram schools, saying their operators will be told to name a “contagion management supervisor” who will be in charge of checking workers’ or visitors’ health conditions everyday and installing hygiene products in their offices.

Authorities said the operators will also be counseled on whether to tell their employees to work from home or come to the office on staggered schedules and keep a one-meter (3.3-feet) or more distance from each other at all times.

At the Sejong Government Complex, about 123 kilometers (76 miles) south of Seoul, at least 14 public servants have been confirmed infected with the coronavirus as of Thursday, bringing the city’s total cases to 24. At least six officials are from the Ministry of Oceans and Fisheries, Sejong officials said, adding that some hallways and a cafeteria at the complex have been shut down as a result. Health authorities said the sources of most of the infections have yet to be traced.