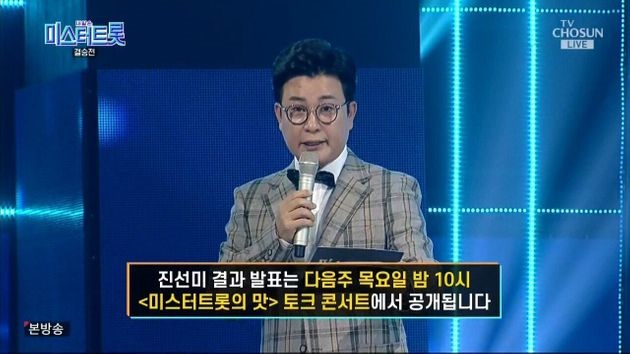 Following rumors earlier in the week that the show’s producers abused show contestants, Thursday night’s live broadcast of the show’s finale did not revealed the final winner of the show because a computer server was overloaded with votes from viewers.

The finale began at 10 p.m. on Thursday, and called for viewers to text in their votes to choose their favorite of the seven finalists.

But during the show, M.C. Kim Sung-joo announced that they could not calculate all the votes because of “the sudden flood of votes” that took the down the server.

A total of 7.73 million votes were cast.

TV Chosun apologized for the failure to announce a winner as promised, and said they will air a special episode next Thursday during which they will announce the winner.

Yet due to audience complaints, the channel will instead be announcing the winner through a special live episode on Saturday evening, right after the 7 o’clock evening news.

“We have used all the resources we have to deliver a result much quicker to you,” the channel said on Friday.

“We apologize once again to everyone who waited anxiously for the results.”

As a token of apology, the show will be donating all the income made from the text message votes to the charity Good Neighbors.

Earlier in the week, the show was accused of abusing its contestants by paying them unfair wages, and signing them to a contract that read, ““Participants will be offered a pay of 100,000 won per episode, but this only applies to those who make it to the first round.”

TV Chosun denied the rumors and said that the show had received legal advice from experts and found no fault and that the contestants had all agreed to the contract.