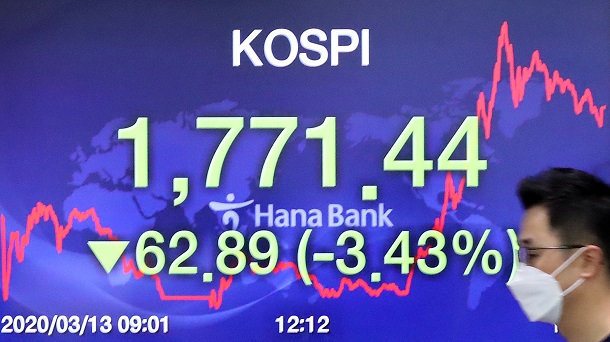 A dealing board at KEB Hana Bank in central Seoul on Friday shows the benchmark Kospi closing 3.43 percent, or 62.89 points, lower than previous session’s close at 1,771.44. [YONHAP]

It’s the first time in history that the Korea Exchange activated circuit breakers and sidecars in both the Kospi and Kosdaq markets during a single trading session. The financial freefall prompted President Moon Jae-in to convene an emergency meeting with the country’s top economic officials Friday afternoon, and the Financial Services Commission (FSC) announced it will implement a six-month ban on short selling for six months starting next week.

The local currency continued to lose ground against the dollar.

Trading volume was high at around 1.02 billion shares worth 13.1 trillion won ($10.7 billion), with losers far outnumbering gainers 871 to 29.
During the day, the index dropped to as low as 1,685.08, but recovered slightly after mass net purchases by retail investors and institutions.

The secondary Kosdaq suffered even greater losses, as it lost 39.49 points, or 7.01 percent, to close at 524.00. Trading volume was high at around 1.5 billion shares worth 8 trillion won, with losers far outnumbering gainers 1,282 to 50.

Trading at the Kospi and Kosdaq both came to a halt twice on Friday as the Korea Exchange activated circuit breakers and sidecars for both indexes.

When an index falls more than 20 percent, the highest level of circuit breaker activates, wherein the market operator closes the trading day.

Both indices also saw their programmed trading halt for an additional five minutes each, as the Korea Exchange activated a sidecar, a weaker version of a circuit breaker also aimed at curbing market volatility. For the Kospi, a sidecar is activated when the Kospi 200 index futures moves more than 5 percent in a one-minute timespan.

The Korea Exchange activated the sidecar for Kospi stocks at 9:06 a.m. Friday as index futures dropped 5.70 percent from the previous session’s close for more than a minute. Program trading for Kospi stocks was suspended for five minutes for a second consecutive day.

The local index plummeted following Washington’s lack of clarity in implementing measures to cushion the economic pain of the coronavirus outbreak, while the pandemic’s rapid spread across the globe added uncertainties to financial markets.

U.S. President Donald Trump made a surprise announcement Wednesday that the country is banning travel from Europe, except Britain, for 30 days, and failed to offer any detailed plans on the United States’ economic rescue package. Global financial markets had already tumbled that day following the World Health Organization’s announcement that the coronavirus outbreak had officially become a pandemic.
Following the announcement, the S&P 500 dropped 9.51 percent and the Nasdaq fell 9.43 percent overnight. The Dow Jones Industrial Average lost around 10 percent to 21,200.62 points, going through its worst daily drop since 1987.

Large-cap stocks in Korea ended lower across the board.

The local currency was trading at 1,219.3 won against the dollar, up 12.8 won from the previous session’s close.

Facing continuing volatility in the domestic financial markets, the Korean government and financial authorities are stepping up to come up with measures.

President Moon Jae-in asked for “unprecedented” policy measures to fight the economic fallout stemming from the coronavirus pandemic, during a rare Blue House meeting Friday with the country’s top economic and financial officials.

The Bank of Korea said earlier in the day that its rate-setting board members are considering holding a meeting for a potential rate cut, and the Ministry of Economy and Finance warned that it will intervene to stabilize the currency market.

After the market closed for the week, the FSC announced it is banning short selling through September in an effort to stabilize the stock market.