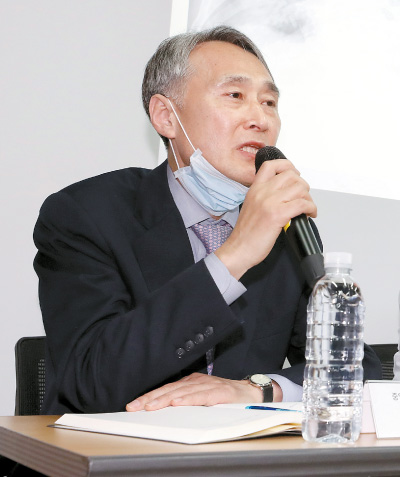 Oh Myoung-don, a Seoul National University Hospital doctor who serves as an advisor for the World Health Organization, speaks during a press conference held earlier this month. He believes Korea needs to prepare more to deal with the outbreak.[YONHAP]

Just one day after the number of new coronavirus infections in Korea dipped to its lowest point in two weeks, the country was jolted by news on March 9 that dozens of additional cases had emerged in its capital.

It was the largest cluster of infections discovered in Seoul, and came after many officials had begun suggesting that the epidemic had peaked. Some had even forecast a virtual end to the crisis by the end of March.

But Oh Myoung-don, a Seoul National University Hospital doctor who leads a clinical committee for Covid-19 - the official name of the new coronavirus - thought otherwise, cautioning that Korea ran the risk of starting the party way before the work was done.

Oh also serves as a member of the Strategic and Technical Advisory Group for Infectious Hazards at the World Health Organization. As a field expert, he suggested early last month that officials prepare for the outbreak to spread down to the community level, meaning new cases had moved beyond tertiary transmission.

About two weeks later, a massive number of new cases were reported in Daegu and North Gyeongsang, the two regions that have together become the epicenter of the coronavirus outbreak in Korea.

As the capital was being hit with the most recent spike in coronavirus infections, the JoongAng Ilbo interviewed Oh last week to hear his insights into how the country, public officials and citizens should respond to the virus gaining momentum in Seoul.

Q. Health and Welfare Minister Park Neung-hoo commented that the coronavirus outbreak is starting get under control. President Moon Jae-in also said the number of new coronavirus infections have been falling daily after peaking at 916 in Feb. 28 to 248 by March 8. Is the outbreak really slowing down?

A. Daegu is likely to be a special case, and that means we can’t tell if the infection is calming down in other regions. We need data that can tell us the spread of the virus on a national scale. Every winter, influenza is evaluated by how much it is going around based on patient data from 200 local hospitals.

The Korea Centers for Disease Control and Prevention (KCDC) said on Feb. 15 that it will use its response to influenza to monitor the spread of the novel coronavirus, but I haven’t heard since then what is going on with that. We would be able to evaluate how much the disease has spread by using a sizable sample of tested patients at each one of the diagnostic centers. If we don’t have that kind of data, we can never say if the outbreak is really slowing down.

Have you brought that idea up to the government yourself?

We brought it up during a meeting among the Daegu city government, KCDC and the Central Disaster and Safety Countermeasures Headquarters. KCDC Director Jung Eun-kyeong said coronavirus cases will be monitored using the system for influenza, but no data have come out so far. Everything must be communicated with references to data and precise evidence. Without that, there’s no need for discussion. Those data are what define my and KCDC’s standards.

President Moon said Korea will stand as an exemplary case as the number of new confirmed cases fall and the outbreak starts to stabilize. Minister Park said the way Korea dealt with the epidemic could be viewed as a model case for the world. What do you think?

The case is ongoing, so it’s too early to jump to conclusions. And we aren’t even sure at this point if we could actually be rated as a well-responded case in the end. It’s better to make evaluations after the outbreak is over. I’ve never seen any country making mid-term assessments. The determination must be made with the proportion of victims to the general public, and the outbreak’s damage to the socioeconomic landscape. We targeted Shincheonji followers with rigorous preventive measures. That we could rate positively, but in the process a number of patients died at home while waiting for hospitals to prepare beds. What score should we give to that?

Are officials communicating well with the general population?

People should understand the government’s measures loud and clear for them to actually work. The government started recommending that schools stay closed and companies have their employees work from home, both of which could yield heavy losses to the economy. But what happened instead? There still are many customers at cafes, and hagwon [cram schools] are still open. Do you think the measures achieved their goals? Not really. Maybe the president himself could have come up front to deliver these messages to the people, instead of ordering the prime minister or other ministers to make the announcements instead. When the president comes forward, the message gains momentum. That’s regretful.

Should the country re-establish its quarantine network?

It’s hard to say whether the country should at this point because we don’t have any data on what’s going on outside Daegu.

How long do you think the global outbreak will last?

Respiratory syndromes start losing momentum in March and April. They are essentially gone from our sight between May and July, but come back in fall and winter. Do you think Covid-19 won’t return by this year’s fall? Our planet is huge. We thought the outbreak could end after the new cases in China stop, but the virus instead spread to other countries like Italy. When the cases stop here, the coronavirus could then travel to Africa. There’s also Australia down in the southern hemisphere.

Then what should we do?

Do you think we should do the same as we do now, when the coronavirus returns in the fall, after we relax from seeing no additional confirmed cases? We need both spear and shield, which are treatments and vaccines. Vaccines take more time than treatments and are harder to make. We should be looking for treatments to be used in the fall. But the total funding that the Korea National Institute of Health is giving out for 12 emergency research projects on Covid-19 treatments and vaccines comes down to just 1.46 billion won [$1.2 million]. That money is spread out over a number of years forward. That’s nowhere near what we need. We are so vulnerable, and too relaxed.

What should be done for a treatment to be developed?

One of Korea’s strengths is in producing biosimilars. The Welfare Ministry, Industry Ministry, Science Ministry and any other related agencies must come together. The country should pour all its resources into finding a feasible treatment option. Companies like Celltrion have the technology. In an epidemic case like this, companies are not really inclined to start on treatment projects, because there’s too much risk for failure. The government should be ready to cover that risk. We can make this into an emergency national project. Nothing can be promised from the initiative being a mini-project for the KCDC.

But there’s remdesivir from Gilead Sciences in the United States.

That experimental drug entered Phase 3 clinical trials. But even if that trial succeeds, will there be enough volume of remdesivir for all patients in the world to consume? How much of it do you think will come to us?

Should the general population be wearing masks?

The United States claims that people don’t need to wear masks, but that’s not the case here. People in the United States use cars as regular means of transportation, but we don’t. According to two studies on Covid-19 published on international papers, Covid-19 starts becoming infectious a day before symptoms appear. [...] Even if you are healthy right now, you may already be spreading the virus. People should be wearing masks, at least to protect others. If the virus outbreak is actually calming down in Korea, that means we owe a lot to Korean people who wore masks everywhere they went, schools that remained closed and a lot of protests, cultural activities and athletic events being postponed. Wearing a face mask is the best any individual can do to contain the outbreak.

Some have criticized that the Blue House has been making moves on the quarantine measure based on opinions from non-experts. What are your thoughts?

I can’t tell you much on that. Many media outlets, academic experts and task forces publicly and coherently delivered their opinions to the government -- whether it takes those views or not is up to the higher-ups. The Blue House must have heard a lot of possible measures proposed at many levels. All opinions could be different. I also heard from some that I have become a loner, but I don’t think so. Other competent professors advised top officials at the Blue House, and my opinion could be different from younger experts in the field.

Pneumonia symptoms go away in two to three weeks for Covid-19 patients that stay in bed treated with oxidative therapy. It can be naturally cured, and that method works better than some antivirals. But that’s different from how we should be treating MERS patients. And I don’t know how helpful it is to inject H.I.V. treatment to Covid-19 patients with pneumonia symptoms.

Some patients suddenly died at home.

There also was some criticism of the government for revealing too many specifics on where confirmed patients went and when.

Politicians should have brought those opinions to academics before taking it to the public. To be honest, I don’t know how much it helps to reveal what confirmed patients did in containing the outbreak. We need to consider the possibility of infringing individuals’ privacy and that action’s possible negative effect on patients’ future. An individual could give up some of his or her rights for the public, but that shouldn’t be taken for granted. I believe the whereabouts of Covid-19 patients should be made public when there’s a danger of an unspecified number of others being infected. We should be staying away from opening up the whereabouts for cases without such need.

What’s your message to the government?

The government should release statistics on confirmed cases and Covid-19 deaths as soon as possible. Those statistical data are going to help quarantine and preventive measures in other countries. Many of them want our data more than those from China. Making our numbers and facts available to the world is our duty and a way to help out the international society.