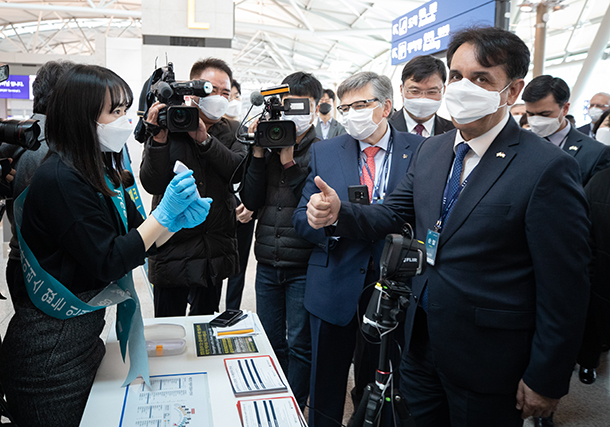 More countries are looking to Korea’s experience in containing the spread of the coronavirus through a comprehensive approach - pairing swift and extensive testing with transparent dissemination of information to the public - as the world struggles to fight the global pandemic.

French President Emmanuel Macron told President Moon Jae-in that he respects the Korean government’s “transparent and effective” response to the coronavirus outbreak, saying that France would like to learn from the approach.

The two leaders held a 35-minute phone conversation Friday, according to the Blue House, in which Macron asked Moon to share Korea’s experience of containing the coronavirus, officially called Covid-19, outbreak.

Moon said Korea is ready to “share Korea’s experience and clinical data secured in the process of treating patients to the international community,” said a Blue House spokesman, and emphasized the need for international efforts to develop a vaccine and help the recovery of the global economy.

Korea’s approach is characterized by a rapid response to curb the spread of the virus through swift screening and quarantining of patients and their contacts, monitoring the inflow and outflow of travelers and using innovative technology including smartphone apps and drive-through testing stations.

At one point, Korea was the country with the most number of confirmed coronavirus patients outside of mainland China and saw an exponential increase in coronavirus cases in late February, mostly in the Daegu and North Gyeongsang areas and linked with Shincheonji, a religious sect. The high number of cases came as Korea has tested more patients than any other country - more than 15,000 people daily at its peak.

As of Sunday, Korea, with a population of around 51 million, has tested 268,212 people, of which 243,778 were found negative. Korea has over 8,100 confirmed cases as of Sunday but has seen a slowdown in new cases over the past week and reported a two-digit increase in patients Sunday, the lowest since Feb. 21.

But Korea has not yet had to enforce major lockdowns like in China and Italy and instead has encouraged a system based on public trust and cooperation. The Korean government is sharing updates nearly in real time through daily briefings by the Korea Centers for Disease Control and Prevention (KCDC) and emergency alert text messages sent via mobile networks.

Tedros Adhanom Ghebreyesus, director-general of the World Health Organization (WHO), said in a briefing Friday, “Europe has now become the epicenter of the pandemic, with more reported cases and deaths than the rest of the world combined,” apart from mainland China, and urged countries to take a “comprehensive approach” to limit the spread of the virus.

U.S. President Donald Trump introduced drive-through testing as part of efforts to contain the virus in a press conference at the White House Friday as the United States declared a national emergency over the coronavirus.

Free drive-through stations have been used in Korea as a swift and accessible way to get tested for the virus while avoiding contamination. Trump had previously questioned the effectiveness of the drive-through testing.

Trump continued, “The goal is for individuals to be able to drive up and be swabbed without having to leave your car.”

On travel restrictions to China and Korea he said that he hopes to “be able to open things up as quickly as possible” as they “make progress, as they get down to the number that we all think is right.”

The state of New York opened its first drive-through test site Friday in New Rochelle, the city with the biggest cluster of coronavirus cases in the United States, and expects to eventually be able to test hundreds of people per day.

U.S. health experts have also often cited Korean data and indicated expectations that the U.S. curve would align similarly with that of Korea. Amid criticism about the lack of test kits available in the United States, Vice President Mike Pence announced that free coronavirus testing would be provided for every American.

“When this is all over - and it will end - you will see a curve of how the coronavirus outbreak evolved,” said Anthony Fauci, director of the National Institute of Allergy and Infectious Diseases, during a White House coronavirus task force press briefing Saturday. “We’ve seen it already with China; we’re starting to see it with Korea - which brings us now to what we can expect in our own country.”

Members of the U.S. Centers for Disease Control and Prevention have recently visited the KCDC and observed Korea’s system of curbing the spread of the virus, collection of data and the relaying of information to the public, said Seoul officials.

The United States on Saturday extended its travel ban to Britain and Ireland effective Monday midnight after imposing one on 26 European countries last week.

Foreign media have also been looking to the Korea model in containing the virus.

Britain’s BBC on Thursday presented a report titled “Coronavirus in South Korea: How ‘trace, test and treat’ may be saving lives,” and noted that the “preventative measures being taken in South Korea have so far involved no lockdowns, no roadblocks and no restriction on movement.”

U.S. broadcaster NBC reported Friday that the drive-through model in New York “follows what health care workers in South Korea were doing weeks ago, helping that nation become a leader in testing capabilities.”

On Friday, members of the diplomatic corps in Seoul visited Incheon International Airport to observe Korea’s quarantine procedures aimed at containing the spread of the virus both in the departure and arrival processes.

Diplomats from 47 countries, including 15 ambassadors, visited Terminal 1 of the airport in two groups, according to the Ministry of Foreign Affairs.

They were briefed by Koo Bon-hwan, president of the Incheon International Airport Corporation, and witnessed the multi-tiered health screening process including temperature checks for outbound passengers.

They also observed the special entry procedures for travelers arriving from certain countries most affected by the virus, including filling out health questionnaires and downloading a phone app.

Korea’s screening and quarantine process is paired with IT technology such as mobile apps tracking the conditions and movements of infected patients.

Self-quarantine violators domestically can face fines or imprisonment. Korea doesn’t allow those who have been in contact with confirmed cases to exit the country for 14 days.

The country has not yet applied entry bans on travelers except for those coming from Hubei Province in China.

Instead, it has special entry procedures for travelers from China, which was expanded to include several European countries starting Sunday.