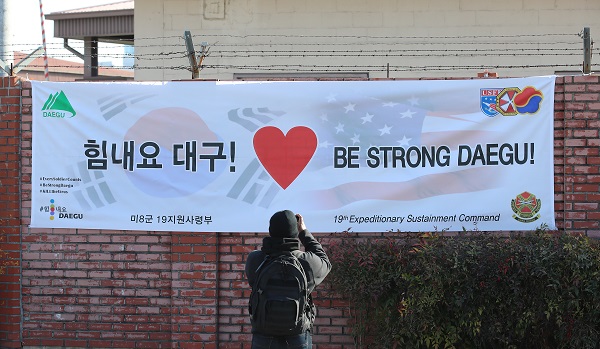 A passerby takes a photo of a banner hung on a wall at the U.S. Army’s 19th Expeditionary Sustainment Command in Daegu Sunday calling on Daegu citizens to stay strong in the coronavirus outbreak. [NEWS1]

It was the first time Seoul has ever declared an area to be a special disaster zone due to the spread of a contagious disease, not a natural disaster.

Daegu and North Gyeongsang were named so-called special care zones on Feb. 29 when hundreds of infections were traced to a church building of the Shincheonji religion in Daegu, but the designation of a special disaster zone usually comes with far more benefits.

Blue House spokesman Kang Min-seok said in a statement Sunday afternoon that President Moon Jae-in authorized the special disaster zone designations at 2:10 p.m. Minister of Health and Welfare Park Neung-hoo is expected to hold a joint press conference with Minister of Interior and Safety Chin Young later in the afternoon.

The designations came as daily infections of the coronavirus have been dropping in Korea lately, yet still mostly coming from Daegu, the country’s fourth-largest city, and the surrounding province of North Gyeongsang, both in the southeastern parts of the nation.

The Korea Centers for Disease Control and Prevention (KCDC) announced Sunday morning that 76 new infections were counted Saturday, of which 41 were from Daegu and four from North Gyeongsang. Nine were from Seoul and 11 from Gyeonggi.

Health officials said Sunday afternoon that 124 infections have been traced to an insurance call center in Sindorim-dong, Guro District, western Seoul, so far, the largest cluster in the capital.