Few visitors walk around Gyeongbok Palace, a popular tourist attraction in central Seoul, on Sunday as a social distancing campaign is ongoing throughout the country to prevent the spread of the coronavirus.[NEWS1] 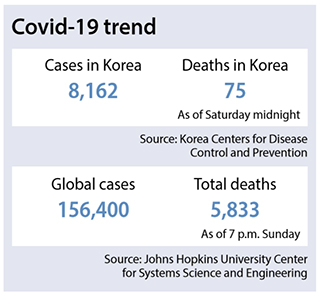 It was the first time Seoul has ever declared an area to be a special disaster zone due to the spread of a contagious disease instead of a natural disaster.

The designations came as daily confirmed cases of the coronavirus, officially known as Covid-19, have been dropping in Korea, yet still mostly come from Daegu, the country’s fourth-largest city, and the surrounding province of North Gyeongsang, both in the southeastern parts of the nation.

The Korea Centers for Disease Control and Prevention (KCDC) announced Sunday morning that 76 new infections were counted Saturday, bringing Korea’s total infections to 8,162. It was the first time in 23 days that daily confirmed cases dropped to a two-digit figure.

Of the 76 new cases, 41 were from Daegu and four from North Gyeongsang.

The areas declared a special disaster zone in North Gyeongsang were Cheongdo County, Bonghwa County and Gyeongsan, which have all seen high concentrations of infections and deaths, Prime Minister Chung Sye-kyun said Sunday.

Chung continued that authorities would look into other areas as well to see whether additional designations should be made.

Daegu, Cheongdo County and Gyeongsan were previously named so-called special care zones by the central government as infections in those places rapidly increased, but the designation of a special disaster zone usually comes with far more benefits, such as subsidies for living expenses, relief funds and discounts on bills. 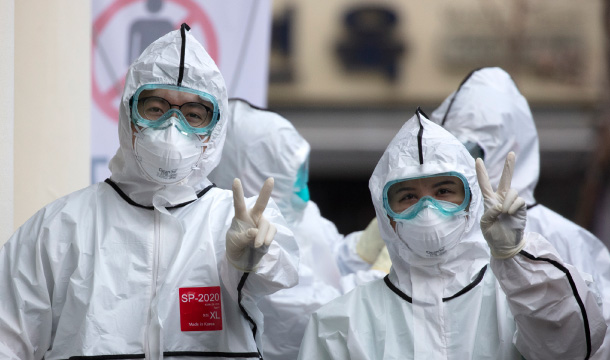 Medical workers in full protective gear flash a victory sign on their way to a ward of Keimyung University Dongsan Medical Center in Daegu on Sunday, where many coronavirus patients are hospitalized for treatment. [YONHAP]

“Eighty-three percent of nationwide infections and 87 percent of deaths are concentrated in Daegu, Cheongdo, Gyeongsan and Bonghwa,” Chung said, continuing that residents in those areas faced severe damages as a result and had to “halt all their economic activities.”

Chung stressed that the government’s designation of a special disaster zone marked “the beginning of damage control.”

As of Saturday at midnight, 75 people were reported dead from the coronavirus, three more than the previous day, while 834 people were said to have fully recovered, 120 more than the day before, according to KCDC statistics.

Most infections from Daegu and North Gyeongsang were traced to a church building of the Shincheonji religion in Daegu after a middle-aged woman who attended services there first tested positive on Feb. 18. In the following weeks, local officials tracked down over 260,000 Shincheonji adherents and so-called trainees in Korea to ask about their symptoms and put them through virus tests, of which positive results led daily infection numbers to soar.

Health officials announced Sunday afternoon that at least 124 infections have been traced to an insurance call center in Sindorim-dong, Guro District in western Seoul, so far, the largest cluster in the capital. Most were call center employees working on the 11th floor of the 19-story Korea Building, which also housed other companies, a wedding hall, a coffee shop and studio apartments.

Officials still don’t know how the virus penetrated the call center or the Shincheonji church community and have yet to find any link between the two clusters. Five employees of the call center have been identified as Shincheonji members so far, and they all tested negative for the coronavirus.

Health authorities said Sunday afternoon that over a thousand people who worked in the Korea Building have been tested, of which 86 turned out positive; 38 were the people they had close contact with, such as their relatives.

Some 16,000 other people who authorities suspect visited the Korea Building or the surrounding area for five minutes or more recently have been informed via text message to get tested if they think they’ve come down with symptoms of the coronavirus, said Kwon Jun-wook, director of the National Health Institute, who’s part of a government coronavirus task force.

At the Sejong Government Complex, about 123 kilometers (76 miles) south of Seoul, 27 public servants at the Ministry of Oceans and Fisheries have tested positive for the coronavirus, up from six last Thursday. Sejong officials said Sunday that infections within the ministry weren’t likely to grow any higher because all 795 workers in the ministry, including employees dispatched from other companies, have already been tested and received their results.

With nationwide kindergartens, elementary, middle and high schools closed till next Monday, the Ministry of Education announced Sunday it would make an announcement either today or tomorrow on whether a third postponement would be declared.

Schools were supposed to start their spring semester on March 2, but the Education Ministry delayed the date until March 23 out of fear that the virus may spread among schoolchildren.

Cho Hee-yeon, head of the Seoul Metropolitan Office of Education, wrote on his Facebook Saturday that it was his “primary thought” that another delay was “inevitable” because opening school doors would contradict the core principle of preventing the spread of the disease known as social distancing.