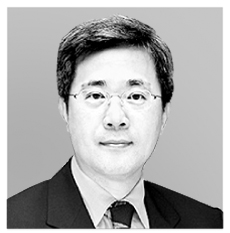 Lee Byong-chul
The author is an assistant professor at the Institute for Far Eastern Studies, Kyungnam University in Seoul.

Election night 2017 came as a dramatically joyful festival to Korean voters on the street. Korean liberals at the time saw the left-leaning candidate Moon Jae-in’s victory in the presidential election not just as a one-time event, but as a harbinger of over 20 years of liberal rule. Koreans got into a panic when the Sewol ferry sank in 2014, where more than 300 people drowned, most of them teenagers on a school trip. A deep trauma in the national psyche led people to demand that President Park Geun-hye step down.

Park did not do the most important work the government can do. Neither did she comprehend what the government should do in a crisis. She allegedly relied on a longtime friend and confidante, Choi Soon-sil, who overwhelmingly interfered with government affairs, despite having no official post. The first female president, a daughter of strongman Park Chung Hee, was eventually impeached. In its impeachment bill, the National Assembly found that Park’s reticence undermined the people’s right to know about the government’s activities. The TV networks were full of angry people pronouncing the immediate arrest of the already impeached head of state. The conservative president was, after all, put in prison.

In retrospect, the 2017 by-election in May wasn’t a ratification of the liberal agenda such as justice, fairness and democracy, because the election showed that an ability to govern administrative affairs and implement policies had nothing to do with the political conviction at the very top of the ideological ladder. But the coronavirus, Covid-19, crashed the liberals’ hope completely. Given the Moon administration’s poor handling of the infection crisis, in particular, the election was fought on images and perceptions. Opponents of the liberal administration began to point out that the left-leaning human rights lawyer-turned-president has been basking in the so-called halo effect of Park’s impeachment.

To many, the Moon administration was incompetent to fight against the Covid-19 outbreak. Its response was discomfiture. At the beginning, the government was in a cleft stick. As an old Korean saying goes, “High hopes, high disappointments.” The number of people calling for Moon’s impeachment online has approached 1.5 million. Moon’s incompetent response to the surge of the coronavirus is not the only thing about the president that citizens distrust.

Moon came to save the broken government, not to bury it. Over time, however, censorious pundits and influential media have found him reluctant to hear their voice. They were frustrated over the president’s perception about the Cho Kuk scandal. People felt that the progressive government was moving in the wrong direction.

Hastily predicting that the outbreak would “disappear before long,” Moon and his advisers simply ignored medical experts’ arguments if they didn’t fit their mental framework. In truth, nine provinces in China as of March 2 reportedly tightened visitors from many countries, including Korea.

China did commit some incredible faux pas. That’s a kind of intolerable insult. People in wrath may well sign an online petition for the impeachment, but few imagine that the impeachment petition would be realized, to say nothing about its feasibility.

It is nasty to politicize the coronavirus outbreak as a partisan agenda. Those who are still angry at the Moon government over its incompetence of the virus outbreak forget that a great number of medical doctors, nurses and volunteers are fighting against the virus day and night. If there are things that have to be done right now, we should encourage these heroes and heroines, who should be in the front seat of Korea’s modern history.

The overall narrative of the year 2020 is tragic. It seems inevitable that those who argued for Park’s impeachment will be put into a political defense box.

As Edmund Burke, the Irish statesman and philosopher, once put, “The only thing necessary for the triumph of evil is for good men to do nothing.” But what we have learned from a national crisis today is that good and serious people are rolling up their sleeves for their nation even though the government does not want to listen to them. What they really want from the government could be the trust, not face masks.