BOK cuts interest rate to a historic low of 0.75 percent

BOK cuts interest rate to a historic low of 0.75 percent 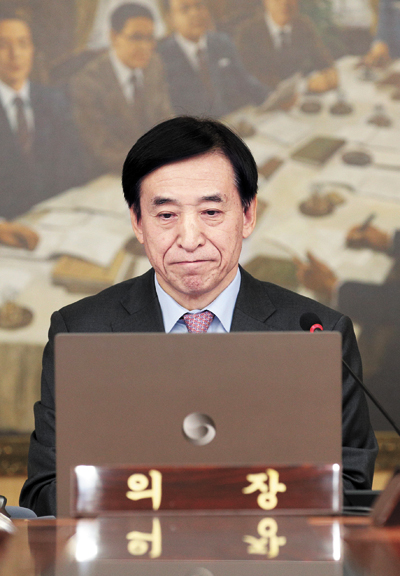 The Bank of Korea (BOK) slashed the country’s key interest rate by 50 basis points to 0.75 percent Monday, an all-time low, echoing the nervousness of central banks around the world about the coronavirus pandemic’s impact on the world economy.

It is the first time Korea’s key rate has gone under 1 percent.

The central bank also admitted it should lower the 2.1 percent economic outlook for this year announced in February, although it didn’t offer a new number.

The decision made by the seven-member monetary policy board of the bank was one to six, with Lim Ji-won voting for a 25 basis point cut rather than 50.

The new borrowing costs will be applied starting today.

“Since the last monetary policy board meeting, concerns about a global economic slowdown have deepened with Covid-19 spreading globally,” the BOK said in a release. “The outbreak has also resulted in a significant increase in the volatility of major price variables, including stock prices and exchange rates, in domestic and global financial markets and a sharp fall in international oil prices.”

The central bank convened an extraordinary meeting of the board Monday in response to the U.S. Federal Reserve’s earlier-than-expected rate cut Sunday. The monetary board has only held two extraordinary meetings in the past. The first was in September 2001, when the board decided to cut interest rates by 50 basis points after the 9/11 terror attacks. In October 2008 it voted for a 75 basis point cut in response to the global financial meltdown.

The Federal Reserve, which was scheduled to hold a two-day Federal Open Market Committee meeting today, made a surprise cut Sunday by a full percentage point to a range of 0 to 0.25 percent.

“The recent move by the Fed of cutting the rate by a total of 150 basis points and follow-up movements by other central banks around the world gave us leeway to respond,” BOK Gov. Lee Ju-yeol said at a press briefing.

It said it would lower the interest rate charged to banks that borrow money from the central banks to help small- and mid-sized enterprises. That interest rate will be discounted by 50 basis points from 0.75 percent to 0.25 percent.

The BOK’s rate cut was largely expected as the spread of the novel coronavirus accelerated in the West.

Korea’s benchmark Kospi and secondary Kosdaq market were both halted for trading Friday for the first time in history as market volatility reached the limit. Even with the Fed’s additional rate cut Sunday, investment sentiment didn’t get any better around the world.

When asked if the rate cut was too late, Gov. Lee said “timing” was critical.

“It is right to cut the rate now as the number of infected patients is on a downturn. If we had cut the rate last month, it wouldn’t have had any effect on the market.”

The market seemed to think otherwise. “There are limits to what a monetary policy can do at this moment,” said Sung Tae-yoon, an economics professor at Yonsei University.