Property punters oblivious to the coronavirus continue to bid

Property punters oblivious to the coronavirus continue to bid 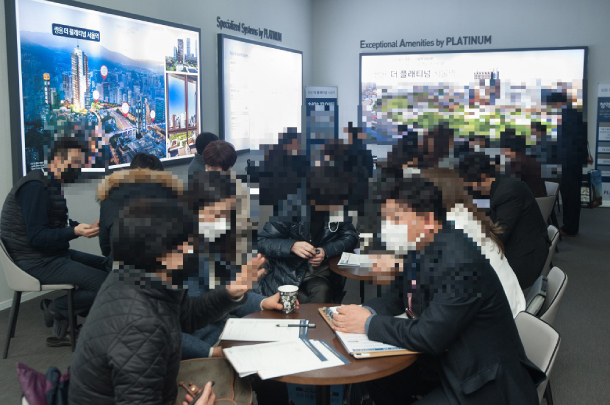 With their masks on, potential buyers discuss making property purchases at the Ssangyong The Platinum Seoul Station, an officetel complex to be built in Jungnim-dong, Jung District, central Seoul. [SSANGYONG ENGINEERING & CONSTRUCTION]

As the coronavirus spread rapidly throughout the nation earlier this month, the property market didn’t miss a beat. The speculative frenzy continued.

Open houses are closed, but that is not stopping the real estate crazed from lodging their offers.

Even at the epicenter of the virus crisis, activity has remained brisk. On March 4, 55,710 people applied for just 394 units in Cheongra Hills Xi in Namsan-dong, Jung District, in Daegu.

For some time, the government has been working to cool the property market. It has instituted a raft of measures to that end, adjusting the loan-to-value ratio, limiting mortgages and raising taxes.

But contrary to expectations, the measures have only served to exacerbate the situation, with buyers rushing to the market regardless of external conditions, including the relatively high cost of financing and the slow economic growth in Korea.

Even the coronavirus outbreak, which has brought business activity in Korea to a standstill, was not enough to dampen the demand for properties.

In Suwon, Yongin and Seongnam in Gyeonggi, bidding is still as brisk as ever.

Ssangyong The Platinum in Suwon was the first apartment project accepting buyers since the government’s latest real estate regulation was announced last month.

The project recorded 16 offers for each unit available, with some of the more popular units getting 31 offers.

GS Engineering & Construction on March 3 accepted bids for the 132 units of Gwacheon Jade Xi, located next to Gwacheon Knowledge Information Town in Gyeonggi.

Forena Busan Deokcheon in Deokcheon-dong, Buk District, Busan, recorded an over 88 to 1 competition, with some units oversubscribed 207 times.

Because of the government pressure on prices, some new apartments are going for half the price of the nearby apartments, attracting a large number of buyers.

The cost per 3.3 square meters for Jungheung S-Class in Wirye, Gyeonggi, which recorded 104 times oversubscription on Feb. 28, is 20 million won. As such, an 84-square-meter apartment unit is priced at 629 million won. An apartment of the same size built four years ago trades at 1.1 billion won.

A real estate agent in Pangyo, Gyeonggi, said usually the prices vary according to specifications, such as the floor of the apartment.

The current trend for rising demand for new apartments is likely to continue as 325,000 apartment units are expected to be on preconstruction sale this year, 15 percent fewer than last year.

The limited number of apartments in the market is likely to drive up demand.

“The further lowering of preconstruction sale prices due to government regulations will likely continue the current heated demand for the time being,” said Lim Chae-woo, chief real estate researcher at KB Kookmin Bank.