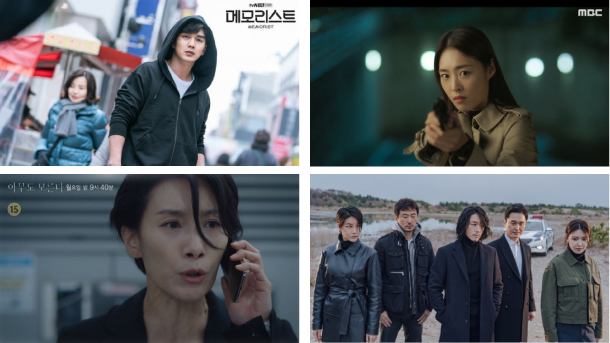 Get rid of the notion that all Korean dramas are about romance and filled with cheesy cliches. The latest trend on TV is fighting crime.

Ever since the success of last year’s popular drama “When the Camellia Blooms” on KBS, serial killers all of a sudden seem to be a part of many new shows on TV. Although the main story of the drama was a blossoming romance between Dongbaek and Yong-sik, many fans tuned in to follow the story of the characters tracking down a serial killer that haunted the town. Since then, murderers have been looming in the background of many plots to satisfy viewers looking for a fast-paced thriller that will keep them hooked.

It’s no coincidence that three drama series currently on air - OCN’s “Tell Me What You Saw,” SBS’s “Nobody Knows” and tvN’s “Memorist” - feature characters hunting killers. The MBC drama series “The Game: Towards Zero,” which ended last week, also told a crime-centered story.

To spice up the stories and differentiate themselves from other shows on TV, many of the characters are equipped with special abilities to catch their culprits. On “The Game: Towards Zero,” a detective enlists a helper - an oracle who is able to see how a person will die when he meets their eyes. In “Tell Me What You Saw,” the main protagonists are a genius profiler and a detective with photographic memory who work together to find a serial killer who has a habit of leaving peppermint candies on their victim’s bodies.

In “Memorist,” the protagonist is the only detective in the world who’s publicly admitted to his psychic powers.

Out of the four, “Nobody Knows” has the most realistic detective as its main character. Although certainly part of an elite force, the protagonist here is essentially an ordinary police detective. Without any particular powers though, the character instead has a powerful motive to catch the killer: Her childhood best friend is one of the victims. The series also focuses on social issues such as domestic violence, school violence and corruption.

“If you want to enjoy a suspense-building thriller, I think you should turn the channel to other dramas,” the show’s producer Lee Jung-heum said at a press conference last month. “This show, on the other hand, is about humanism. People usually think of hunting down a criminal when a detective shows up, but our story is about what happens to relationships during the crime-solving process. The atmosphere of the story will be different than other crime thrillers.”

According to culture critic Kim Heon-sik, while the genres of TV dramas have become more diverse over the years, the broadcasters still have to make compromises so that the shows appeal to viewers’ expectations.

“It’s also important to distinguish whether the network [airing the series] is a public broadcaster or on cable,” Kim said. “Cable channels such as OCN have been airing hard-boiled crime mysteries for years, and even for ‘Tell Me What You Saw,’ viewership ratings are not that high. Public broadcasters, on the other hand, work to suit the tastes of the audience and soften up the genre a bit, adding romantic or emotional elements to thrillers.”

Kim cited shows such as “Woman of 9.9 Billion” and “When the Camellia Blooms,” both 2019 KBS shows that mixed thrillers with romance.

“However, it was remarkable that ‘When the Camellia Blooms,’ which seemed to be a typical romance story, chose to add a serial killer to the plot,” Kim said. “Most romance stories don’t do that. The genres of local drama series have definitely expanded outside of just romance.”

More crime-focused series are set to air later this year, including JTBC’s “Model Detective” (translated) in April and OCN’s “Unexpected Investigation” (translated) in May, both of which have detectives as the protagonists.

After the success of shows like “When the Camellia Blooms,” some of the networks are starting to green light stories without an obvious love story running through the plot.

“A pattern has emerged where recent investigative stories try to avoid romance as much as possible and instead focus on the crime at hand,” an industry insider said.