Shoe repairman steps up in times of need: Kim Byeong-rok has sold his plot of land to help Korea bounce back from coronavirus outbreak

Shoe repairman steps up in times of need: Kim Byeong-rok has sold his plot of land to help Korea bounce back from coronavirus outbreak 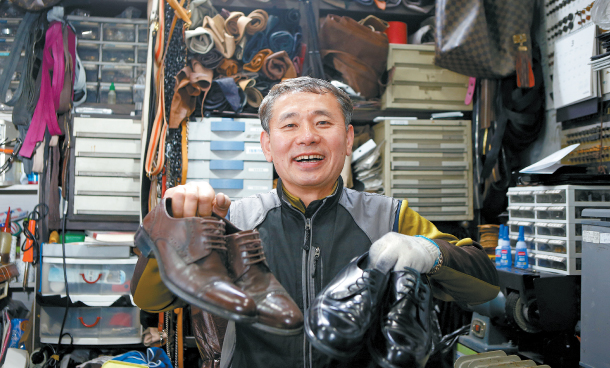 Shoe repairman Kim Byeong-rok poses for a photo with polished shoes at his repair shop located in Sangam-dong, western Seoul. He decided to donate his 33,000-square-meter (355,200-square-foot) plot of land to the city of Paju to help those struggling due to the coronavirus outbreak. [BYUN SUN-GOO]

With the coronavirus outbreak turning into a pandemic affecting the whole globe, the news can get overwhelming and it is easy to feel a bit helpless. The Helping Hand series shares stories of people doing what they can to assist their neighbors in the midst of crisis.


PAJU, GYEONGGI - Kim Byeong-rok has been repairing and shining shoes for 50 years, ever since he was 11 years old. He could not afford to open his own shop, so for a long time, he worked out of a street stall in the Haengsin-dong neighborhood of Goyang, Gyeonggi.

Back in 2008, Kim secured a tiny booth that is about 10 square meters (108 square feet) in Sangam-dong, western Seoul, and has been running a shoe repair shop with his wife Kwon Jeom-deuk, 59, ever since. Kim and his wife currently live with two of their three children in a 66-square-meter apartment in Haengsin-dong.

After decades of toiling away, Kim purchased a 33,000-square-meter plot of land located in Paju, Gyeonggi, six years ago. 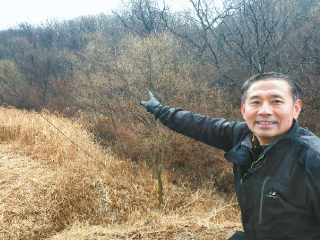 “I bought the property in the hopes of using it later as a place where I could do some farming and live with other people who have nowhere else to go.” Kim added that he considered using the land for good someday.

When the coronavirus outbreak hit Korea, he realized that the day had come. The shoe repairman decided to donate the entire plot of land to help those who have been hit hard by Covid-19, with no strings attached.

“I can’t bring the land with me to the afterlife. I think this is the right time for me to make a decision,” Kim said while walking around his land on March 10.

“The financial difficulties I feel this time are even worse than the ones that I went through when we had the Asian Financial Crisis back in the 1990s. I came to realize how tough the situation is now and it made me want to donate the land.

“I want to share what I have while the country is in a dire situation and help those who are in trouble. I’m not affluent, but I want to do my part, however small, to contribute so that the country can overcome this financial crisis,” Kim added.

Until he reached his decision, however, Kim had many sleepless nights.

The decision was hard for Kim’s wife to swallow as well.

“When I learned of his plan, I was shocked. I felt like one of my arms was being cut off,” said Kwon. “But I couldn’t help but respect his decision, because he is using the land for a good cause.”

The Paju city government accepted Kim’s wish to donate his land. “With the coronavirus outbreak hitting the entire country, the local economy in Paju is also struggling,” said a city official. “We highly appreciate [Kim for] donating his own assets to the city. We promise to work hard to revive the local economy,” the official added.

According to the local government, the officially assessed price of Kim’s property is 242 million won ($200,000), but the land could be traded for between 500 million won and 700 million won in the market.

Kim has been giving a helping hand to those in need for his entire life.

In 1997, Kim learned how to cut hair and visited nursing homes and community centers for seniors four to five times a month to provide free haircuts.

Another campaign that Kim has conducted since 2010 has him paying for the car behind him at toll gates. Thus far, he says that he has paid for about 400 cars.

Kim does not have time to enjoy holidays and weekends because he is mostly cooped up at his shop all day long, but when he is away from work, he spends most of his time doing volunteer work.

“There’s no greater joy than to see my neighbors feel happy with my little help,” said Kim.

Kim was an ordinary young man who had little interest in charitable work until he became seriously ill in his late 20s.

“I hovered between life and death as I was suffering from tuberculosis. I lost half of my lung functions, but a miracle happened and I could survive. After that, I started to think of the rest of my life as something extra. So, I began to care for neighbors who are in need.

“I feel flattered to see my children now openly talk about my job during their job interviews. They used to be ashamed of my job back when they were young, though,” said Kim with a laugh.