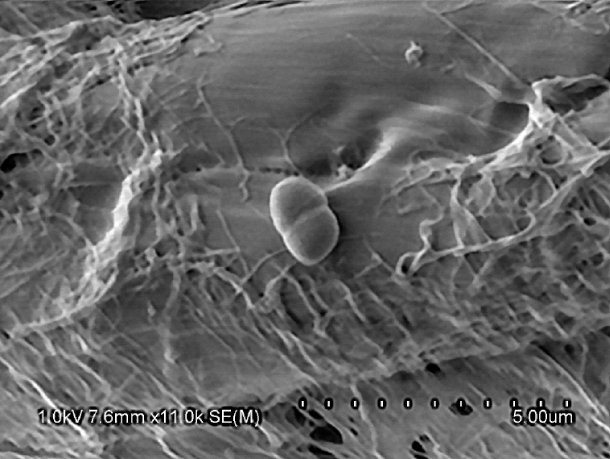 A microscopic image of the bacteria Deinococcus subtilis. [COSMAX]

A Korean cosmetics company has tapped into cosmic inspiration for its latest sunscreen, which it developed from a pair of extreme bacteria species that survived on the surface of the International Space Station.

Cosmax said Monday that the product uses a base ingredient called Solarbiome, which contains the two space bugs - Bacillus subtilis and Deinococcus subtilis. Cosmax researchers came across the hardy microorganisms during a review of NASA’s Project Expose-E experiment, which tested various molecules and biological samples’ exposure to ultraviolet radiation.

The two bacteria were able to endure more than 100 days with high resilience to ultraviolet rays, radiation and temperatures above 100 degrees Celsius (212 degrees Fahrenheit).

After experimenting with these strands, Cosmax said its research team discovered that the two bacteria were able to recover skin damaged and aged by sunlight - which in turn led to the conclusion that they may be effective in blocking ultraviolet rays. It took three years for the company to develop the microorganism strands into a marketable skin care product.

A patent for Solarbiome, the base ingredient that contains both bacteria, was registered earlier this year. Cosmax claims the substance is not only capable of blocking harmful radiation from the skin, but can also recover damaged skin cells and prevent aging.

“This is the first case that NASA’s microorganism was transformed into a functional skin care product,” said Chairman Lee Kyung-soo.

The company said it plans to expand the scope of Solarbiome-containing products to primer, cream and color cosmetics in the future.

The sunscreen will be released this week by the Korean cosmetics brand Dr. Jart. Cosmax is one of Korea’s top two original design manufacturers that supply not only domestically, but also to major global brands.