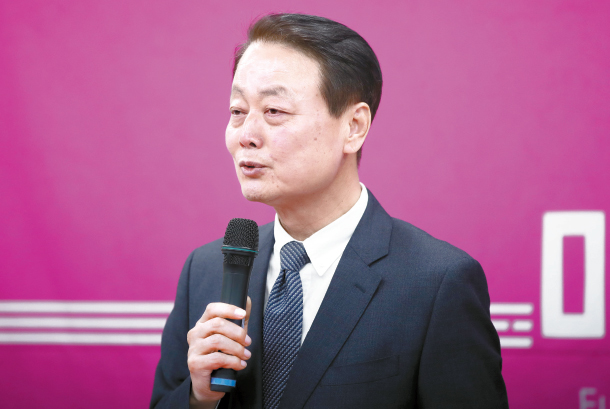 Hwang then named Park Hyung-joon, a political strategist who headed the National Integration Solidarity to arrange the conservative merger to produce the UFP, and Shin Se-don, an economics professor at Sookmyung Women’s University, as co-chair of the campaign committee.

Shortly after Hwang made the announcement, Kim Chong-in, former head of the rival Democratic Party (DP), also released a statement to make clear that he will not join the largest opposition party as the chief campaign manager. “As the internal situations of the UFP became complicated, Hwang proposed appointing co-chairmen of the election committee,” Kim said. “I then told him I could not understand why he was trying to recruit me and wished the party the best luck.”

“I concluded that the UFP is not in a position to receive my help,” Kim said. “I feel sorry for all those who anticipated it.”

Over the past month, Hwang has tried to recruit Kim to head a campaign against the ruling DP to win centrist votes in the capital region. Kim, 79, is a renowned strategist who had successfully headed former President Park Geun-hye’s victorious campaign in 2012. He was then recruited by Moon Jae-in, then chairman of the DP, reinvented the liberal party and led its campaign for the 2016 general election.

In the last few weeks, Kim has been critical of some of the UFP’s nomination decisions, and resistance grew inside the party about appointing him as the chief campaign manager. In a recent interview with the JoongAng Ilbo, Kim criticized the UFP’s decisions to nominate Thae Yong-ho, former North Korean diplomat, for Gangnam A District of Seoul, and Choi Hong, former CEO of ING Asset Management Korea, for Gangnam B District. He said he will oversee the UFP campaign only when he is given the power to resolve some nomination problems.

UFP members were upset about his criticism. Kim has said it was a “national disgrace” to nominate Thae, and Thae demanded an apology. “It is an extremely inappropriate remark,” said Rep. Shim Jae-cheol, floor leader of the UFP.

“We will look like a fool for begging Kim to head our campaign,” Rep. Kim Young-woo also said.

Kim Hyong-o, former National Assembly speaker who chaired the nomination committee, held a press conference on Friday and announced his resignation. “I will take all the blame,” he said as he stepped down.

The UFP held an emergency Supreme Council meeting Friday night and debated about the plan to recruit Kim Chong-in. After listening to the leaders’ opinions, Hwang contacted him Sunday evening and offered the position of a co-chairman of the campaign committee, not a sole chairman, citing worsened sentiment of the party members. Kim then refused to join the UFP.

“There was only a month left before the general election, and we were at the final stage of the nomination process, but Kim demanded changes in some constituencies,” a UFP official said.

Others said Hwang decided to make a lukewarm offer to Kim because of his history. Although Kim is largely credited for his role as a strategist of major politicians, Ahn Cheol-soo, former President Park and President Moon, he failed to maintain good relationships after elections.

Meanwhile, the UFP said Monday that it decided to cancel the nomination of Choi, former CEO of ING Asset Management Korea, to Seoul’s Gangnam B District. Choi is known as a close associate of Kim Hyong-o, former head of the nomination committee.