Suiting up for club and country

Suiting up for club and country 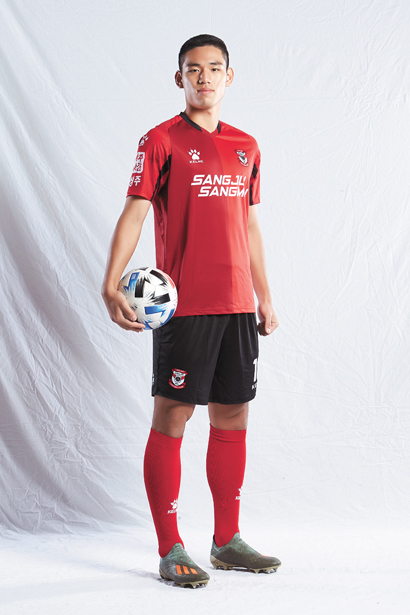 After an impressive career with Korea¡¯s U-23 team, Sangju Sangmu FC¡¯s Oh Se-hun has set his sights on earning a spot on Korea¡¯s Olympic team this summer. [SANGJU SANGMU FC]

Although 2020 is an Olympic year and a medal earns a national team member an exemption from having to serve in the military, Oh Se-hun decided to not take his chances. At 21, he joined the K League 1’s military team, the Sangju Sangmu FC.

In Korea, all able-bodied men are obliged to serve in the military for approximately 19 months. The only way an athlete can skip their mandatory military duty is by taking home a medal at the Olympics or gold at the Asian Games.

Since missing out on 19 months of training and playing for their respective clubs can greatly affect an athlete’s career, local leagues feature military sports team where the young soldiers can serve while also keeping themselves in shape. But before soldiers get assigned to their bases, everyone has to go through a five-week boot camp and undergo basic training. This also applies to those exempt from military duty.

While the baseball military team competes in the Futures League, the KBO’s minor division, in football, Sangju allows players to continue playing at the highest level as the club competes in the K League 1, the top division.

Oh applied for the Sangju military team last year and was accepted to join starting at the end of 2019. He started off his duty just like everyone else - at boot camp. And that was the beginning of Oh’s unusual military experience.

Of all athletes, Oh is probably the only one that has gone to boot camp twice.

Just a week into his boot camp, Oh was called up to Korea’s U-23 football team to compete at the Asian Football Confederation (AFC) U-23 Championship in Thailand. Oh scored two goals in the tournament and helped Korea win its first-ever U-23 Championship title and earn a spot to play at the Tokyo Olympics.

Once the tournament was over, Oh had to rejoin boot camp in order to complete his mandatory five weeks.

“I had to shave my head twice because I went to the boot camp twice,” Oh said.

For some, having to go through boot camp twice may sound like a nightmare, but for Oh, it is a point of pride.

“Nowadays, football at boot camp is banned,” Oh said. “Due to some issues our unit had, we joined the Korea Armed Forces Athletic Corps a week late.”

The headquarters of the Korea Armed Forces Athletic Corps, better known as Sangju, is located in Mungyeong, North Gyeongsang, and due to the outbreak of the coronavirus, players on the military team are banned from leaving the base and completely restricted from doing anything but play football.

“From going out to sleeping out to vacation time - everything has been restricted,” Oh said. “We receive masks from the base, and I brought some from boot camp. We always wear them when we go outside. We use hand sanitizer and check our temperatures when we go to the fitness center. It can feel suffocating, but since preventing ourselves from the coronavirus is our priority, we’re fighting through it well.”

Like all the other K League 1 clubs, Sangju left the country to begin preseason training in January. The team planned to settle in Meizhou, China, for a few weeks to prepare for the upcoming season.

However, due to the coronavirus outbreak, they had to return earlier than expected, and upon arrival back in Korea, they had to spend two weeks in self-quarantine.

After the team wrapped up its quarantine measures, Oh started training with Sangju for the first time on Saturday.

Oh is expected to be discharged in June 2021. However, if he manages to earn a spot on the roster for the 2020 Tokyo Olympics and Korea has a podium finish, he can be discharged immediately. Until then, he is training according to Sangju’s daily schedule.

“We have early morning roll call, training in the morning and the afternoon,” Oh said. “After that, we go to the fitness center. Since our base if surrounded by mountains, it is the perfect environment to just play football. At boot camp, I gained about two to three kilograms [4.4 to 6.6 pounds]. I’m on a diet to lose some weight.”

Before Oh left an impression with Korea’s U-23 team at the AFC U-23 Championship, he was already a familiar name from the Taeguk Warriors’ run at the 2019 FIFA U-20 World Cup in June. At the time, the U-20 Korean national football team finished as the tournament’s runner-up, and along the way, Oh helped the team by scoring two goals.

At the time, Oh played for Asan Mugunghwa, on a loan. The club used to be associated with the national police agency and was another team with which the players could fulfill their military duty. But now, the club has a mix of conscripted police and regular players playing for them.

“Our head coach emphasizes a soldier’s mind,” Oh said. “If we play hard on the pitch then we’ll not only be able to be in the upper split [of the league rankings], we’ll also be able to win.”

Before the K League 1 started, the Korea Football Association held a poll for which player was most likely to win the Young Player award at the end of the season. Cho Gue-sung of Jeonbuk Hyundai Motors FC topped the poll with 61.74 points and Oh placed second, with 18.15 points.