In Debriefings, the Korea JoongAng Daily discusses a topical issue in-depth in a Q. and A. format. In this Debriefing, we look at the link between the coronavirus outbreak and the Shincheonji Church of Jesus, a religious sect in Korea whose members account for the majority of infections in the country so far.

Of the over 8,300 cases of coronavirus in Korea as of Tuesday, more than half have been traced to the Shincheonji Church of Jesus, a religious sect in Korea.

According to Korea Centers for Disease Control and Prevention (KCDC), 8,320 Koreans were confirmed infected with Covid-19 as of Tuesday, of whom 5,016, or 60.3 percent, were either members of Shincheonji or non-members who contracted the disease from a member.

The sect and the irresponsible behavior of some of its members has been criticized - especially patient No. 31, who had reportedly refused to be tested for the virus despite running a high fever. She also visited a hotel buffet and two church services which more than 1,000 people attended before finally testing positive on Feb. 18.

As the number of infections traced to the group shot up rapidly - jumping from 11 on Feb. 19 to nearly 3,000 in 11 days - health authorities scrambled to contact members of the group to identify their whereabouts and prevent the further spread of the disease as quickly as possible.

The group was further blasted when it was reported that membership lists it provided were incomplete or had incorrect information.

Its founder now faces possible murder charges for not sharing details about its members with health authorities promptly, though the group has denied withholding information from the government intentionally.

Unless you are a specialist on religions in Korea, this is likely the first time you are hearing about the Shincheonji Church of Jesus. The following debriefing will look at the group itself, how its members came to be infected with Covid-19 and what factors about the group’s behaviors and beliefs contributed to it becoming a hotbed for the virus. 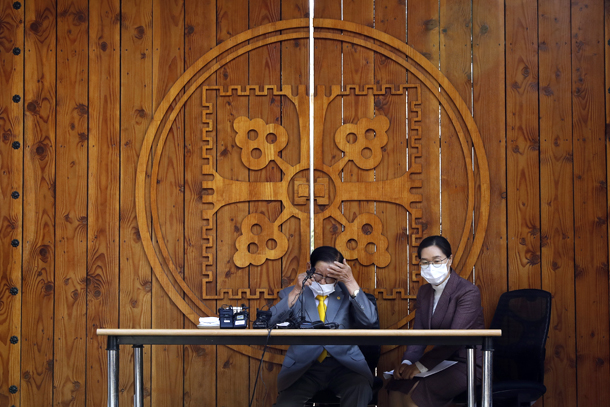 Lee Man-hee, left, the founder of the religious group Shincheonji Church of Jesus, speaks to the press on March 2 at the group’s facility in Gapyeong, Gyeonggi. [YONHAP]

First of all, tell us about the group.

The group’s official name is the Shincheonji Church of Jesus. It was founded by 88-year old Lee Man-hee in 1984. The group’s spokesman Kim Si-mon said in an online press conference on Feb. 23 that it has 245,000 members. According to a document the group submitted to the Korean government, they have some 1,900 churches and multi-purpose facilities in the country. According to an internal document from the group in 2017 recently obtained by CNN, the Shincheonji church is also said to have a presence in the United States, with over 1,000 members in Los Angeles, and dozens of chapters in China as well. The Korean government believes there are about 30,000 believers abroad.

It has “Church of Jesus” in its name. Does that mean it’s a Christian group?

Despite the name, the sect claims it has no ties to other Christian groups. The group’s introduction on its website reads, “We are not a traditional church that exists between the first coming of Jesus and the coming of what’s prophesied in the book of Revelation.” The group often vilifies the Christian Council of Korea, an association of Protestant Christian groups. The traditional church, according to the group’s post on its online community on Naver on Dec. 28, 2016, is “the one who married the Devil and […] will be damned to hell.”

Then what do they believe in?

The group believes that Jesus selected Lee Man-hee as “the promised pastor” to disseminate the ultimate truth that only the group holds the key to understanding the book of Revelation, the last book in the Bible, according to animated videos on its YouTube channel.

“Every cult has this in common - they believe they have the ultimate way to salvation,” said Baek Seong-ho, a reporter from the JoongAng Ilbo who has been writing about the sect for years and has met Lee in person before. “They believe that outside of their denomination or sect, no one else can be saved.”

Salvation does not come easily according to what the group believes.

They focus on the number 144,000 mentioned in the book of Revelation, more specifically in Revelation 7:4, “Then I heard the number of those who were sealed: 144,000 from all the tribes of Israel.”

The group has created a system where one must earn their place as one of the 144,000. “You must first be educated in the Gospel Room before you can move onto the Mission Center,” the group’s website says. “There, you have to pass the test to become one of the 144,000 sealed.”

They’re said to be one of the fastest-growing religious sects in Korea.

Part of the reason behind the group’s rapid growth has to do with the tactics it uses to proselytize people.

“Some people become fanatics, quit their jobs or schools and focus on proselytizing all the time,” said Kim Kang-rim, a former member of the sect who now runs a counseling center for family members hoping to extract their loved ones from the group, in a recorded video he uploaded onto his YouTube channel on March 1. “Not everyone is like that in Shincheonji, but there is pressure to do well [in proselytizing] to become one of the 144,000.”

The followers are taught to memorize certain interpretations that they believe Lee created. “For instance, they say the word ‘tree’ stands for ‘church’ and the word ‘bird’ actually means ‘the Holy Spirit,’” Baek said.

Shincheonji followers use such interpretations to decipher passages in the book of Revelation. “No one else can read the secrets in the Book of Revelation like we do,” Lee told Seoul Shinmun in an interview two years ago. “Our doctrine is superior to all doctrines that have existed in the last 6,000 years.”

It’s been reported that a large portion of the followers of Shincheonji are in their 20s and 30s. What about the doctrine and the rigorous program could be attractive to young followers?

Here we have to rely on the testimonies of those who have left the group.

“If you are a young person in Korea, struggling to find a job, belonging to the group gives you this feeling of security,” a 24-year-old man who was a member at the Daegu branch of Shincheonji from 2015 to 2019 told the JoongAng Ilbo last month. “Within the group you are given specific tasks, and that makes you feel important.”

Is that why there were several people holding picket signs that read “Let my children go” at the press conference hosted by Lee earlier this month?

Yes, they are relatives of young members of Shincheonji, some of whom have left their homes and even sued their parents when they tried to get them to leave the group and return home. On March 12, a group of parents and former members of the sect sued Lee Man-hee for fraud and blackmailing their children.

“Lee knows that he himself will die one day, but he is teaching my kids that he will live forever, a lie that he has concocted,” a member of the National Shincheonji Victims Association said in a press conference in front of the Blue House that day. “He then forced my children to proselytize and demanded money from them […] and threatened that their lives will be in danger if they use the internet to read up on information about the group.”

According to a former member that the Joongang Ilbo spoke to recently, recruiting young members is part of the group’s strategy. “Because they have more time on their hands compared to older adults with full-time jobs or families to take care of,” he said on the condition of anonymity.

How did Shincheonji first get linked to the outbreak?

Epidemiologists have not been able to pinpoint the first member to have been infected, but they estimate that a group got infected around the same time as patient No. 31, who was the first Shincheonji member to have tested positive. She is reported to have run a high fever from Feb. 7 but attended a service at the sect’s church in Daegu on Feb. 9 and 16.

The group continued to draw attention as more than half of the new cases detected daily were traced back to it.

Notably, a group of Catholics traveled to Israel on a group trip from Feb. 8 to 16 and some 30 of them tested positive by Feb. 24. The case was a mystery because there were zero cases of infection in Israel at the time. But after a few days, it was revealed that one participant’s son was a Shincheonji member who had attended the same service as patient No. 31 on Feb. 16.

At times, it felt like the group was everywhere. There was the case of the head of infectious disease prevention team of the public health center of Seo District, Daegu, who tested positive for the virus on Feb. 23. He turned out to be a Shincheonji follower. There was also the case of a nurse at an outpatient ward of Bundang Jesaeng General Hospital Gyeonggi testing positive on March 9, leading to a temporary shutdown of the ward. She was a Shincheonji follower, and according to Seongnam city government, had been advised by the city government “not to go to work if you are an employee at a medical institution” since March 2 - advice which she ignored.

In a recent mass infection case concerning 12 employees of Korea Electric Power Corporation’s Daegu branch office, the first patient turned out to be an acquaintance of a Shincheonji follower.

Had any members visited Wuhan, China, the epicenter of the outbreak?

At the request of the KCDC, the Ministry of Justice looked into the exit and entry records of 244,743 Shincheonji members from July last year to Feb. 27 and found that 3,610 members had traveled from China to Korea, of whom 42 specifically traveled from Wuhan. But Shincheonji members weren’t the only ones traveling from Wuhan, so they cannot be solely blamed for the outbreak.

Is Lee being investigated for murder?

Seoul city government called for an investigation into Lee and other leaders of the sect for murder on March 1.

“Had they taken appropriate measures earlier on, we could have prevented so many of the deaths and illnesses,” Seoul Mayor Park Won-soon wrote on his Facebook account that day.

The city governments of Seoul and Daegu, the latter of which holds 71.5 percent of the country’s Shincheonji-related infections as of Tuesday, also sued the group for obstruction of duty in February and March after they found mismatches in the list of facilities run by Shincheonji and the list of information about their members submitted by the group to the government for early detection and prevention.

Do people want the group to disband?

A petition submitted to the Blue House on Feb. 22 requesting the government disband the sect has gained over 1.3 million signatures as of Tuesday.

“When the Constitution speaks of freedom of religion, it speaks not only of the people’s freedom to choose what to believe but also to choose what not to believe,” the petition reads. “Shincheonji’s operations, as reported by various media outlets and investigative programs, seem to infringe on this basic freedom of people by adopting aggressive and dehumanizing means of proselytization and creating a religious system that worships one man.”

Seoul city government has begun the process of rescinding the registration of the sect in Seoul recently.