Long way for the torch to go

Long way for the torch to go

The Olympic flame lighting ceremony for the 2020 Tokyo Olympics was held at the Temple of Hera in West Olympia, Greece. The tradition of the flame originates from the ancient Olympics, when the event was a festival for Gods. The flame commemorates Prometheus, who stole fire from Hephaistos for humans after Zeus had taken away fire from them. Zeus tied Prometheus to a rock on Mount Kazbek in Georgia, and had eagles feed on his liver. As his liver perpetually regenerated, Prometheus’ suffering never ended. Ironically, the site where the flame was lit in the ancient Olympics was the Temple of Zeus in Olympia.

The flame traveled through Greece and arrived in southern Greece’s Sparta on March 13. Because crowds often gather along the route, the Hellenic Olympic Committee (HOC) had to suspend the event out of caution due to the coronavirus. The torch was moved to the Panathenaic Stadium in Athens, the site of the first Athens Olympics in 1896.

Back then, there was no Olympic flame. That tradition started during the Amsterdam Olympics in 1928. The torch relay started in 1936 for the Berlin Olympics. The torch was ignited in Olympia and traveled to Berlin in a relay. Carl Diem, secretary general of the Organizing Committee of the Berlin Olympic Games, is credited with starting the tradition. 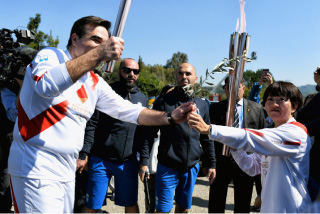 The HOC will hand the torch over to the Tokyo Olympic Committee at the Panathenaic Stadium on March 19. The torch will fly on a special transport flight and will land at the Japan Air Self-Defense Force base in Miyagi Prefecture. It will then move to Fukushima Prefecture and travel around Japan from March 26 for 121 days until July 24.

The purpose of the event is to publicize the Games and get people excited for the upcoming event. The climax is the announcement of the final runner who will light the caldron in the stadium. The final runner for the Seoul Olympic Games in 1988 was sprinter Im Chun-ae.

In 2018, the final runner who lit the caldron at the PyeongChang Winter Olympics was figure skater Kim Yuna.

Can the Tokyo Olympic torch be handed over to a final runner? Everything is trapped in the thick fog of Covid-19. There is a long way for the torch relay to go.