Donations are made easy by Naver and Kakao

Donations are made easy by Naver and Kakao 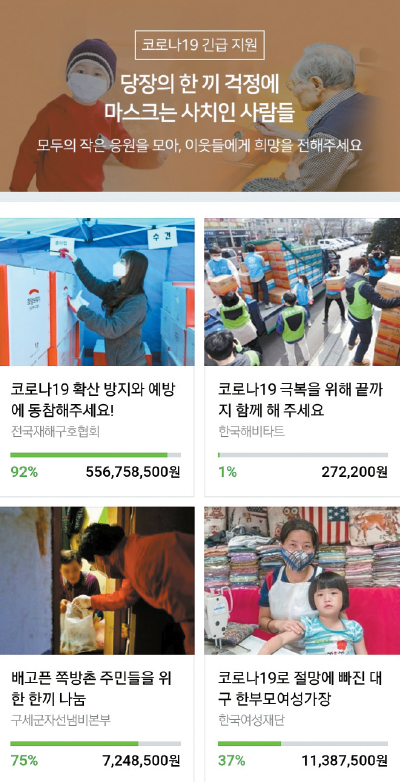 Concerned individuals have committed 3.5 billion won ($2.8 million) as of Monday to help those suffering during the coronavirus outbreak using the donation platforms of online portals.

Happy Bean, a donation platform from Naver that’s been online for 15 years, has taken in 2 billion won from 170,000 people for 224 different charities. The most popular include a free meal service organized by the Salvation Army for people living in jjokbangchon, or areas of low-income housing, and a delivery service for the elderly living alone organized by Onhappy.

Kakao’s KakaoTogether platform - which has been around for 13 years and was formally known as Heemanghae - attracted 700,000 donations totaling 1.5 billion won as of Monday. Among the charities it helps fund is Good People, which supports medical workers in Daegu.

Naver and Kakao are supporting public donations in various ways.

“I am donating my allowance earned by collecting compliment stickers,” a child commented on KakaoTogether.

Each organization using these services is required to disclose who benefits from donations and when the donations are raised and dispersed.

“When a donation group applies for the opening a fundraising effort, it will be reviewed to decide whether to proceed or not, and when the donation is dispersed, the review of the foundation and the results of its use are delivered to the donor via KakaoTalk,” a Kakao official said.

“The full amount delivered to the organization without any commission fee,” a Happy Bean spokesperson said, adding that it discloses the results of each fundraising effort and how the money was used.