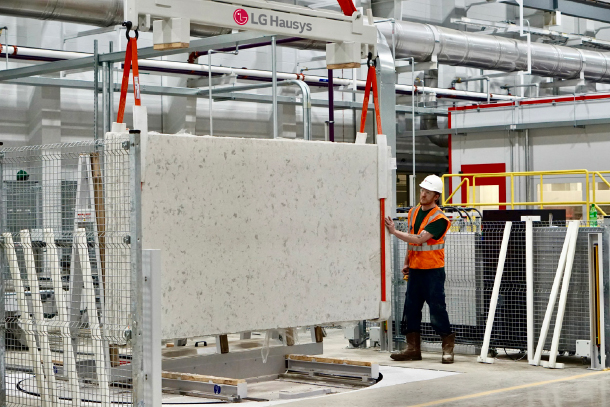 An LG Hausys employee examines an engineered stone plaque at the company’s Georgia plant in the United States. [LG HAUSYS]

LG Hausys, a manufacturer of housing material, expanded its production line for engineered stone at its Georgia plant in the United States, the company said Tuesday.

The company’s engineered stone consists of 90 percent stone and 10 percent chemical adhesives. It imitates marble in appearance but has better endurance and is easier to process. It is frequently used in home kitchens and reception desks at hotels and hospitals.

“The United States accounts for more than 70 percent of the global engineered stone market, which is worth 3 trillion won [$2.4 billion],” said Kang Shin-woo, LG Hausys vice executive president who heads the surface material business. “With the latest expansion, our goal is to achieve 10 percent market share in the region in the next five years.”

LG showcased the new lineup of engineered stone manufactured in the new factory in February at its store in Orange County, California. The new facility is equipped with state-of-the-art equipment and robotics to result in engineered stone that more closely resembles actual marble, the company said.