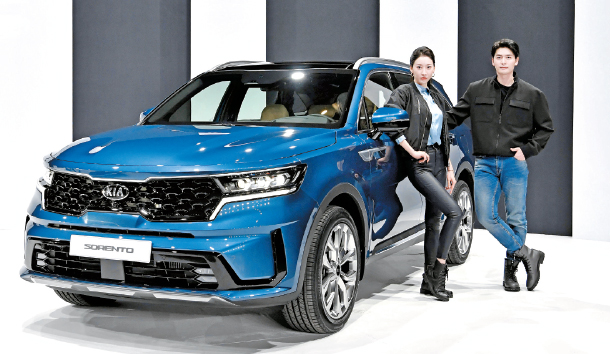 Models pose next to Kia’s fourth-generation Sorento on Tuesday. Due to the coronavirus outbreak, the launch event was presented online in the form of a talk show that was livestreamed on YouTube and Facebook. [KIA MOTORS]

If orders of the fourth-generation Sorento are any indication, one of Kia Motors’ most popular SUVs will have a good year following its official launch Tuesday.

The fourth-generation Sorento, coming six years after its predecessor was introduced in 2014, arrives with an upgraded design and a range of innovative features, Kia Motors said Tuesday.

For 18 days prior to the official launch, Kia Motors said it received a total of 26,368 orders for the new Sorento, putting it well on its way toward the company’s goal of selling 70,000 units this year.

Following the design concept “refined boldness,” the new Sorento’s front end and LED headlamps are connected into a “tiger nose” grille, a hallmark design feature that Kia Motors has been applying to some of its recently released models, including the K5 sedan. The design overhaul is intended to add boldness and spaciousness when seen from the outside.

The fourth-generation model includes expanded interior space compared to its competitors, thanks to the use of new architecture. With a 35-millimeter (1.38-inch) increase to its wheel base, the SUV has greater legroom and more load capacity.

At the moment, Kia Motors is offering the new Sorento in diesel and hybrid options. The diesel version, equipped with a 2.2-liter engine, is rated at 202 horsepower and 45 kilogram-meters (325 pound-feet) of torque.

The gasoline turbo hybrid option, which comes with a 1.6-liter hybrid engine and an electric motor, is rated at 230 horsepower and 35.7 kilogram-meters in torque. But the hybrid model isn’t eligible to receive an eco-friendly tax discount of 2.33 million won per unit, as the Sorento failed to meet the fuel economy standard.

For engines between 1.0 liter and 1.6 liters, a car must have fuel economy of at least 15.8 kilometers (9.8 miles) per liter, but the Sorento hybrid only achieves 15.3 kilometers per liter. After finding that the new Sorento will not meet the standard, Kia Motors halted orders for the hybrid option last month.

Kia Motors is instead spending 33.7 billion won to offer an equivalent discount to 14,490 people who ordered the hybrid option expecting to get the discount.

Kia said no production delays are expected for the new Sorento, as its factory in Hwaseong, Gyeonggi, is relatively distant from areas most impacted by the coronavirus outbreak, and the company has stabilized its supply chain for auto parts.

Kia Motors is also preparing to launch the new Sorento in overseas markets during the second half of this year, but the schedule could change, as the demand outlook seems unstable from the global economic downturn.