Kim Jun-su is at home on stage: Ten years since his musical debut, the singer remains a local theater superstar

Kim Jun-su is at home on stage: Ten years since his musical debut, the singer remains a local theater superstar 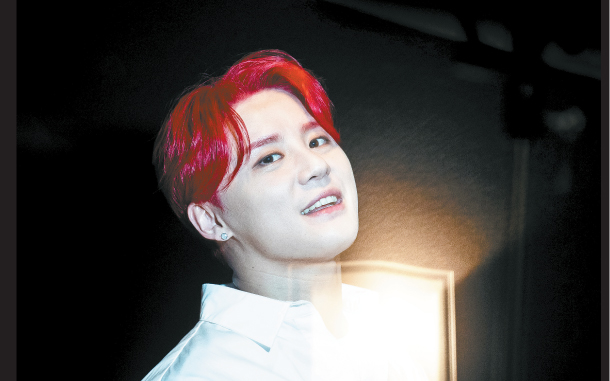 Singer and musical actor Kim Jun-su celebrates the 10th anniversary on his musical debut this year. He dyed his hair red for the role of Count Dracula in the musical “Mozart!” [KWON HYUK-JAE]

Kim Jun-su, also known as Xia Junsu, is celebrating the 10th anniversary of his musical debut this year. The entertainer appeared in his first musical on Jan. 26, 2010 in the lead role of “Mozart!” Since then, the 33-year-old singer and actor has proven that he is a sure-fire hit not only on the charts but onstage, too.

The entire performing arts industry has been hit hard by the coronavirus outbreak that does not show signs of slowing down, but “Dracula: The Musical,” starring Kim, has still managed to fill about 95 percent of its seats in recent weeks.

During a recent interview with JoongAng Ilbo, an affiliate of the Korea JoongAng Daily, Kim said, “Whether I wanted it or not, I was in a situation [that made me] more desperate for musicals, so I tried hard to give my all to musicals.”

Ever since making his musical debut in 2010, Kim has “never taken time off from the stage.” 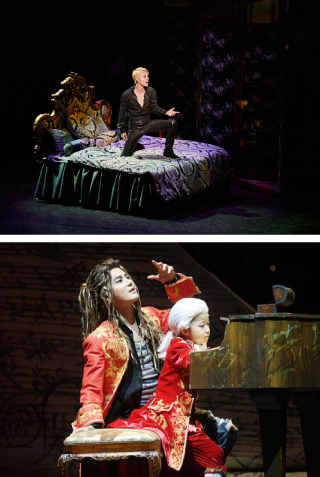 His dedication was noticed when he enlisted in the army on Feb. 9, 2017, just days after his final performance in the musical “Death Note” on Jan. 26.

He was discharged from his mandatory military service in November 2018 and was back on stage a month later.

Kim broke into music as a member of K-pop boy band TVXQ in 2004, but he found himself embroiled in a series of disputes with his former agency SM Entertainment.

Kim and two other bandmates filed a lawsuit against SM Entertainment demanding that the company nullify their contracts, citing an unfair distribution of profits. Kim and the other two members eventually left the group and formed another group called JYJ.

The three singers and SM Entertainment reached an agreement in 2012 through which they decided to terminate the contracts made between the two parties, but JYJ has hardly appeared on terrestrial TV since.

Terrestrial broadcasters have never provided clear answers as to why the members of JYJ have not appeared on their shows, but industry insiders assume that the group has fallen victim to a silent agreement between a major entertainment agency and broadcasters.

Over the past 10 years, the members of JYJ have only appeared on two TV shows aired by terrestrial broadcasters: “Space Sympathy” on EBS in 2015 and “House of Show and Tell” on MBC last December.

When Kim had “downtime doing nothing” after walking away from his former group, he received an offer from the musical “Mozart!” and started off his career as a musical star.

The following are edited excerpts from an interview with Kim.

Q. How did you feel when you first got the offer from “Mozart!”?

A. At first, I turned it down. I was afraid of challenging myself to something new that I never really did before. I wasn’t sure whether I could make it or not. But the production company [EMK] left scripts behind and the scripts changed my mind. The lyrics of Mozart’s songs felt almost like my own stories.

What’s one song from the musical that you relate to the most?

“Why Don’t You Love Me?” introduced me to the world of musicals. The lyrics go like this. “Why don’t you love me the way I am?” I made the decision [of leaving my former agency] in pursuit of happiness, but it became a controversy. I wanted people to look at me the way I was without misunderstanding and speculating. Even if I mess up in the musical, if I can sing and express what I have deep in my mind with the songs, I think that will be good for me.

You said you were comforted by the musical “Mozart!” back then. Is there any other song that you are especially fond of?

There is this number called “Golden Stars” sung by Baronin von Waldstatten. The lyrics are “Love is not binding. Love is free to let go. Sometimes you have to endure the pain. That is love.” The lyrics touched my heart. Those were the things I wanted to tell people and I wanted them to understand me that way. So I could sing it with all my heart. I was deeply immersed in the character.

Before your role in “Mozart!,” you had never been on stage before. Did you have any difficulty saying your lines and playing the character?

I was so out of breath. Before that, I used to sing and dance simultaneously on stage, but [a musical] was way different, maybe because I was nervous. In addition, you need to know how to control your pace because a musical runs for about three hours, but I had this habit of giving my all in just three or four minutes as a singer. Back then, most [musical] actors sang with techniques from vocal music, but I wasn’t, so I was concerned about it. But director Yoo Hee-sung said, “Don’t imitate other actors. If I wanted you to do that, I wouldn’t have cast you in the first place. Develop your style to make people fall for your singing and acting.” I was lost, but he helped me find an answer. I also gained strength to keep challenging myself with musicals [all thanks to him.]

You’ve mostly done original musicals such as “Dorian Gray” and “Xcalibur” or musicals that have premiered on home soil such as “Mozart!” “Elisabeth” and “Death Note.” Do you have your own way of selecting musicals?

It would be easy if I chose hit musicals, but I feel thrilled when I think that a character I created could inspire other actors who play the same role after me. I also try to do original musicals at least once or twice a year because I believe it is a way I can return the love I have received while doing musicals.

There is an old saying that goes “When one door closes, another one opens.” Just like the saying, you started to appear in musicals when your singing career came to a halt.

I could not appear on TV, but musicals became a ray of hope for me. It was a lifesaver and a breakthrough. Thanks to musicals, I have been able to perform on stages that I never imagined being on, and I got an award too. I think I have been able to do this for 10 years because I’ve been telling myself to do what’s right in front of me. These days, 30 to 40 percent of my fans know me as a musical actor. I feel so grateful for that.

You’ve released four solo albums since 2012. Do you have a plan to go back to singing this year?

I’m planning to release an album. I hope I can sing my songs on TV music shows at least once or twice.

There are a lot of young adults who are feeling desperate about their future. If you could give them a piece of advice, what would it be?

Nobody knows what the future has in store for you. Just do what you have in front of you step by step. That’s what I can say for now.