Contagious fake news can really be hazardous to your health

Contagious fake news can really be hazardous to your health 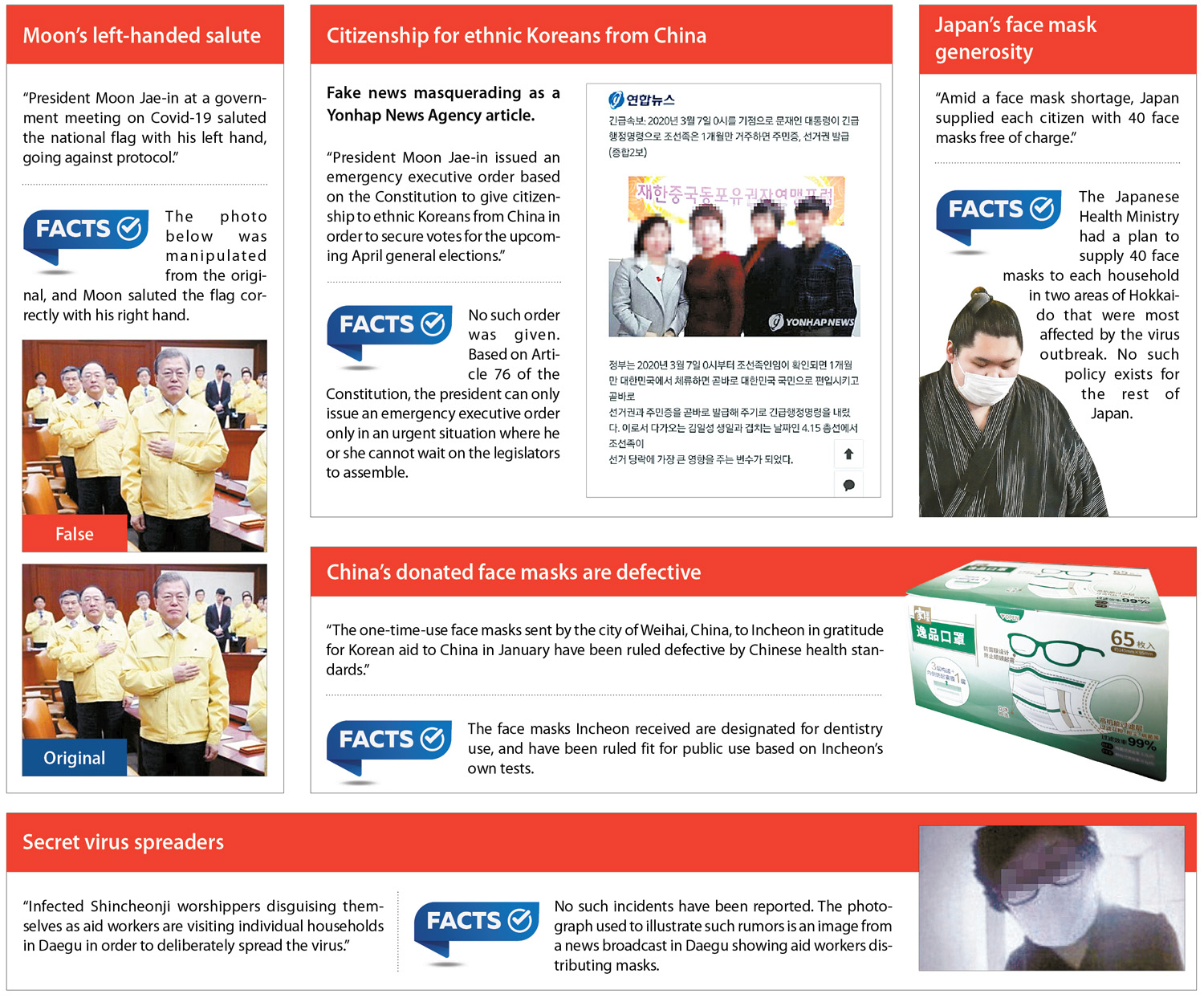 Medical authorities were in for a shock when they reviewed surveillance footage of a Sunday service at the River of Grace Community Church in Seongnam, Gyeonggi. As people filed in for a service on March 8, the pastor’s wife sprayed the mouths of each with a saltwater solution.

The idea was to protect churchgoers from infection. In fact, someone in the congregation was already infected, and the River of Grace Community Church became the second-biggest cluster of patients in the greater Seoul area, producing 52 confirmed infections as of Tuesday - possibly because of the spraying.

According to Kwon Ji-yeon, a fact-checker and journalist at a Christian news outlet, the church’s saltwater prophylactic ritual was prompted by a popular notion going around church groups in Korea: that a person can become immune to the virus if he or she maintains a body sodium level of 0.9 percent by gargling with saltwater twice a day.

“Small churches like this are largely attended by the elderly, who read about such folk remedies and are prone to believe them,” Kwon said on an MBC radio program Tuesday.

The saltwater benedictions at the River of Grace Community Church are just one example of genuinely fake news circulating amid the ongoing coronavirus outbreak.

Like Covid-19 itself, false information spreads rapidly from person to person, prompting behavior that doesn’t help combat the virus and possibly helps spread it.

The more pernicious variants dress themselves with a veil of authority, posing as information from official sources or experts.

One rumor that proved to be particularly contagious recently said the Ministry of Economy and Finance convened a meeting with the heads of Korea’s largest pharmaceutical firms, in which they concluded there was no real treatment for the coronavirus and that any infected person would have permanent lung damage.

No such meeting took place, but the impact of the rumor forced the Finance Ministry and pharmaceutical companies to make a public denial.

False information like this plays on instinctive fear provoked by an outbreak. At a time of many uncertainties, many people feel they have nothing to lose by keeping up with rumors and passing them along, whether they’re true or not.

“I know that such posts making the rounds are not always true, but the alarming situation right now makes me at least read all of them,” said one office worker in his 30s who said he was alarmed by news of the fictional meeting.

“The news that the Finance Ministry and pharmaceutical companies held a meeting appeared possible, and I think the rumor spread even faster because its purpose was to put some blame on the government.”

In many cases, rumors are attributed to medical experts or sources like foreign news outlets that average Koreans may find difficult to fact-check.

According to one of the more popular rumors, doctors believe the coronavirus scars and thickens lung tissue, leaving a person - even one who recovers - permanently dependent on medicine to breathe,.

Medical experts say there is little evidence to back up this claim and that most cases observed so far have not caused any more lung damage than regular pneumonia.

“I’ve looked at a vast array of records like medical reports and expert discussions, but I haven’t found any evidence to suggest that virus patients with light symptoms suffer serious lung damage,” said Oh Myoung-don, a Seoul National University Hospital doctor who leads a clinical committee for Covid-19.

Some fake news thrive on the confusion caused by the outbreak, often mixed in with bits of truth that add a modicum of credibility.

“Some false information is blatantly untrue and quickly dispelled,” said Hwang Yong-seok, a communications professor at Konkuk University. “But there are also those that take on their own life due to uncertainty, such as the rumors surrounding face masks.

One such example, nourished by criticism of the Korean government for a continuing shortage of face masks, is that Japanese health authorities were providing each and every Japanese citizen with 40 free face masks. A far-right-wing online news outlet last week put out that report, generating anger online against the Moon Jae-in administration for rationing face masks.

But no such policy exists in Japan, where, like almost everywhere else in the world, the supply of face masks and protective equipment has failed to meet demand. What actually happened was that the Japanese Health Ministry distributed seven masks per household in two areas in Hokkaido where there were clusters of virus infections, with the goal of increasing that supply to 40 per household, but only in affected areas.

Experts note that a charged political environment ahead of the general elections in April is encouraging the spread of fake news.

“During election time, people tend to say anything they can to erode the credibility of the other side,” said Rhee June-woong, a communications professor at Seoul National University. “One example of doing this is by using fake news, which is difficult to verify in the short term.”

The coronavirus outbreak in Korea was heavily politicized by both established media outlets and politicians early on.

After the number of virus cases in the country spiked due to an outbreak among members of the controversial Shincheonji Church of Jesus, both conservative and liberal camps tried to spin the disaster by accusing each other of having associations with the church.

A far-right YouTube channel known as “Hover Lab,” which on its website openly states it seeks to “improve propaganda,” last week circulated a photograph of President Moon during his presidential campaign in 2012 shaking hands with an elderly man it claimed was Lee Man-hee, the founder of Shincheonji.

The Blue House strongly refuted the claim, saying the man shaking hands is an unrelated civic leader and stressed the government would take a strong legal response to such fake news.

Criticism from the right accusing Moon of failing to ban visitors from China early on in the outbreak has fueled outright lies about the president, including a story saying he issued an executive order giving free citizenship to ethnic Koreans from China in order to ensure a ruling party victory in April.

No such order was given, nor would it be legal.

On the left, Lee Man-hee’s decision to wear a golden watch engraved with the name of former President Park Geun-hye to a press conference fueled speculation that Shincheonji has ties to the main opposition United Future Party. The party has strongly denied the allegations and said it would file a libel suit against Lee Man-hee for smearing its name.

Media experts also note the role of social media and the way people profit off such systems.

The government for its part has stepped up efforts to combat the spread of false information, noting the dangers mistruths pose to its public health campaign against the virus.

Police across the country have booked dozens of people in recent weeks on charges ranging from obstruction of businesses or public health laws, while communications watchdogs continue to monitor materials circulating on online forums and social media.

But analysts also note that existing laws are insufficient to stop the spread of false information. “The only effective medicine to fight fake news is transparency,” said Lee Min-gyu, a communications professor at Chung-Ang University. “The government and other leading organizations must provide transparent and verified information, while the media must increase fact-checking efforts so that the public can have access to real information.”