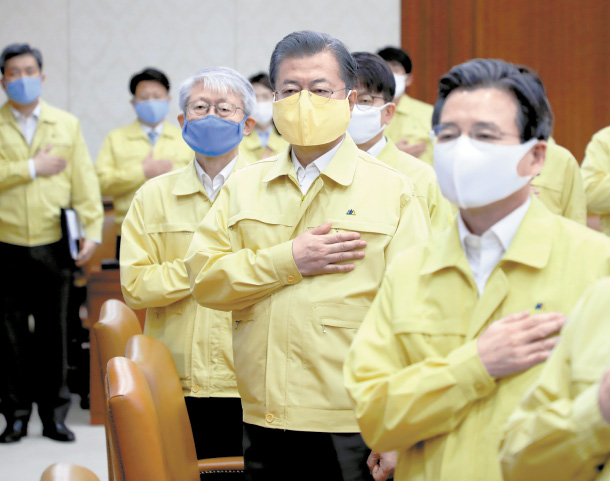 President Moon Jae-in and his cabinet members pledge allegiance to the nation at the Central Government Complex in Seoul on Tuesday before holding a cabinet meeting to discuss the coronavirus crisis. [JOINT PRESS CORPS]

Schools will remain closed for another two weeks, Korean education officials announced Tuesday, delaying the start of the school year for the third time to April 6.

Korean day care centers, kindergartens, elementary, middle and high schools were supposed to start on March 2, but education officials have been delaying the start date out of fear that children may spread the coronavirus in classrooms.

Universities were exempt from the closure order Tuesday, but the Ministry of Education had advised universities last month to flexibly postpone the beginning of their school years by up to four weeks. In response, most universities postponed their start by two weeks from March 2 to March 16 and said they would offer online courses, allowing students to learn from home.

In deciding on the third postponement, Education Minister Yoo Eun-hae said Tuesday in a press briefing that health officials had recommended the ministry delay school openings by at least two to three more weeks, warning that their densely populated environments may help spread the contagion.

On the possibility of delaying Korea’s annual college entrance exam, the College Scholastic Ability Test slated for Nov. 19, the Education Ministry refused to give a clear-cut answer Tuesday, only saying it would “consider” making changes to the overall college admissions process and that any adjustments to the system would be announced after school starts. 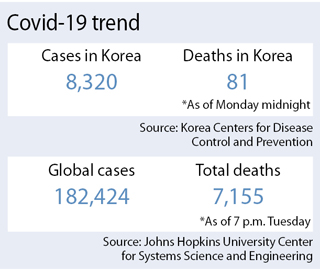 Among the 84 cases, 32 were in Daegu, 31 in Gyeonggi, 12 in Seoul, five in North Gyeongsang and one each in Incheon and South Gyeongsang.

Two recent clusters in western Seoul and Seongnam, Gyeonggi, have caused infections in the capital region to rise lately. The death toll was 81 at Monday midnight, six more than the previous day. A total of 1,401 people were proclaimed fully recovered, 264 more than the day before. The KCDC said Tuesday afternoon that 58 patients were in critical condition.

The second-largest cluster in Korea’s capital area - which includes Seoul, the surrounding province of Gyeonggi and the neighboring city of Incheon - grew to 52 cases Tuesday, up from 46 cases tallied Monday morning.

Of the 52 infections traced to a small Protestant church in Seongnam, Gyeonggi, just south of Seoul, known as the River of Grace Community Church, 50 have been identified as churchgoers. One is the son of a churchgoer and one more person had contact with a churchgoer.

Health officials believe the church’s bizarre preventive measure for the coronavirus triggered the opposite effect when they retrieved CCTV footage showing the pastor’s wife spraying salt water into church members’ mouths and on their palms through a handheld sprayer, claiming that the liquid was meant to disinfect them. Gyeonggi officials said they think an infected patient came into contact with the sprayer earlier this month. The pastor’s wife testified she used the same sprayer on all members and did not disinfect it.

To prevent a similar outbreak, Gyeonggi officials said Tuesday that 137 churches within the province who were busted last Sunday for not abiding by government health guidelines will be ordered to follow even stricter rules - or face such consequences as fines, complete bans on any religious gathering or be forced to reimburse the government for disinfection and medical expenses used on infected church members. 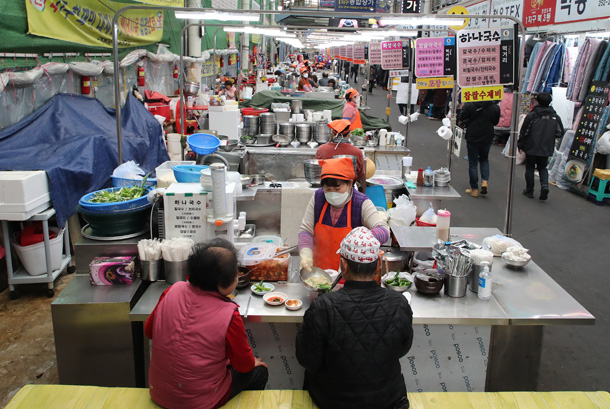 Merchants resume business at the Seomun Market in Daegu on Tuesday, which had been shut down for weeks to prevent the spread of the coronavirus. [NEWS1]

The churches were told to check the medical condition of all church members before they attend services; require members to wear face masks at all times; install sanitizers within their buildings; keep a two-meter (6.6-feet) distance between each member; disinfect entire buildings before and after each service; not provide any food during services; and keep a list of every person who attends each service, including their names and phone numbers.

The largest cluster in Korea’s capital area has been traced to an insurance call center in western Seoul, with 134 infections reported so far, up from 124 people on Monday morning. The KCDC said Tuesday that 88 were employees of the call center while the rest were the people they had contact with, such as their relatives.

With alarming growth in infections in foreign countries, the Korean government announced Tuesday that its special entry procedures will be expanded to arrivals from all countries starting Thursday.

The special entry procedures were applied to visitors from all European countries and some Asian countries previously.

All visitors will have to fill out a questionnaire asking about possible symptoms related to the coronavirus and have their temperatures measured. Those who wish to remain in Korea will have to inform customs authorities of where they will stay as well as their phone number. They must also download an app, through which they are required to inform health authorities about their daily condition.

Visitors from China’s Hubei Province and its capital of Wuhan remain prohibited.