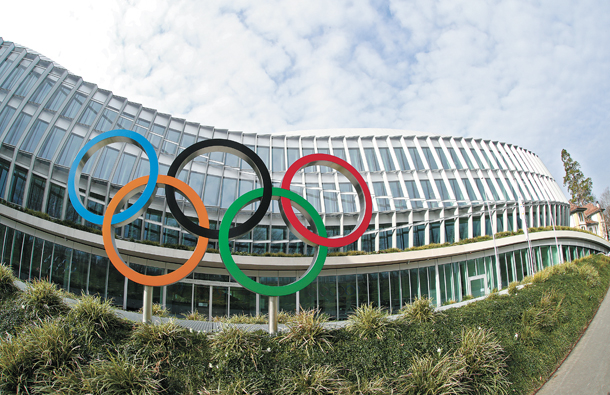 A photo of the Olympic rings in front of the International Olympic Committee (IOC) headquarters in Lausanne, Switzerland, on Tuesday. [EPA/YONHAP]

The International Olympic Committee (IOC) says it will not postpone the 2020 Tokyo Olympics, despite the coronavirus pandemic.

Due to the cancellations and postponements of Olympic qualifiers and sporting leagues, there were talks about the possibility of postponing the Summer Games or, perhaps, canceling it altogether.

However, the IOC held an emergency meeting in Lausanne, Switzerland, on Tuesday, and surprisingly, ruled in favor of Japan’s decision to continue on with the Games, saying it was “fully committed to the Olympic Games Tokyo 2020.”

“With more than four months to go before the Games there is no need for any drastic decisions at this stage; and any speculation at this moment would be counter-productive,” the IOC said through the Olympic website.

The announcement was particularly surprising considering the Vice Chairman of Japan’s Olympic Committee Kozo Tashima tested positive for the coronavirus a day before the meeting.

“The health and well-being of all those involved in the preparations for the Olympic Games Tokyo 2020 is our number-one concern,” the IOC President Thomas Bach was quoted as saying on the Olympic website. “All measures are being taken to safeguard the safety and interests of athletes, coaches and support teams. We are an Olympic community; we support one another in good times and in difficult times. This Olympic solidarity defines us as a community.”

Although Bach mentioned that health is the number one concern, the IOC’s decision to continue their support for the Tokyo Games has already faced criticism. Hayley Wickenheiser, former Canadian ice hockey player and IOC member, called the decision “irresponsible” and “insensitive.”

“From an athlete perspective, I can only imagine and try to empathize with the anxiety and heartbreak athletes are feeling right now,” Wickenheiser posted on her Twitter account. “The uncertainty of not knowing of where you’re going to train tomorrow, as facilities close and qualification events are canceled all over the world, would be terrible if you’ve been training your whole life for this.”

According to the Olympic website, 57 percent of the athletes have earned their spots at the Tokyo Games. However, for the remaining 43 percent of the athletes, the IOC said that they will work with the international federations of each sport to come up with an alternative qualification system. As of the most recent update, Olympic qualifiers for 33 sports have been postponed due to the coronavirus.

In a number of individual events, the Olympic spots are given out based on the world ranking or Olympic ranking points. However, an alternative qualification system could turn out to be a huge disadvantage to a lot of the athletes who schedule their seasons accordingly to the Olympic qualifying events or tournaments that distribute the ranking points to earn their spots.

Alejandro Blanco, president of Spain’s Olympic Committee, as well as U.S. President Donald Trump also voiced concerns and their beliefs that the Games should be postponed.

“The news that we get every day is uncomfortable for all countries in the world,” Blanco was quoted as saying by Reuters. “But for us the most important thing is that our sports people cannot train and to celebrate the Games [as planned] would result in unequal condition. We’re an important country in the world and four months before the games, our athletes can’t arrive in equal conditions.”

Considering the number of athletes who have already tested positive for the coronavirus, the IOC’s decision does not seem to make much sense. Over in Europe, football players have been hit hard by the virus. Major sporting leagues around the world, including European football, the MLB, NBA, National Hockey League and National Football League have suspended or postponed their seasons, and athletes are struggling to train properly. It appears the IOC’s decision has done little to answer concerns and will likely raise more questions.