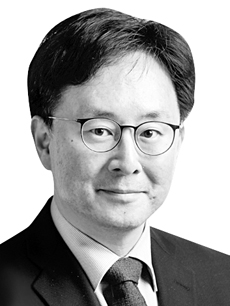 Lee Chul-jae
The author is head of the Military and Security Research Center at the JoongAng Ilbo.

The South Korean government and military hold a military defense exercise against biological agents every fall. The drill that has become an annual routine from 2011 includes the Korean Centers for Disease Control and Prevention, the Armed Forces CBR (Chemical, Biological and Radiological) Defense Command, as well as the U.S. Forces Korea and the Combined Forces Command. The program includes quarantine operations as well as tabletop exercises where government and military officials discuss all possible scenarios, from attacks with biological agents to the outbreak of an epidemic, to simulate appropriate actions.

The exercise was institutionalized to strengthen readiness against a North Korean attack with chemical and biological weapons. The simulation of an infectious disease outbreak had largely been breezed through. But things will change after this year. The scenario of disease outbreak could be considered as important as the simulation against a North Korean attack.

The coronavirus pandemic has put the entire world in a warlike security crisis. On Monday, French President Emmanuel Macron ordered civilians to keep outside activities to a minimum and stay at home, declaring, “We are at war.”

He is not exaggerating. Gunfire may not sound, but all the ground, air and sea troops have been mobilized for the battle with a global epidemic. As of Monday, 2,793 servicemen in Korea were deployed to aid patient care, quarantine and sterilization, as well as inspections at sea and air gateways. As crowded lines formed around drug stores, 98 soldiers have been mobilized to help manufacture masks. With the military engaged in such actions, we are in de facto wartime.

Security is traditionally defined as freedom or resilience against potential harm or unwanted coercive actions by others. For Korea, security was entirely focused on North Korea. A primary role of the alliance with the United States is to ensure strong deterrence against an attack from North Korea. 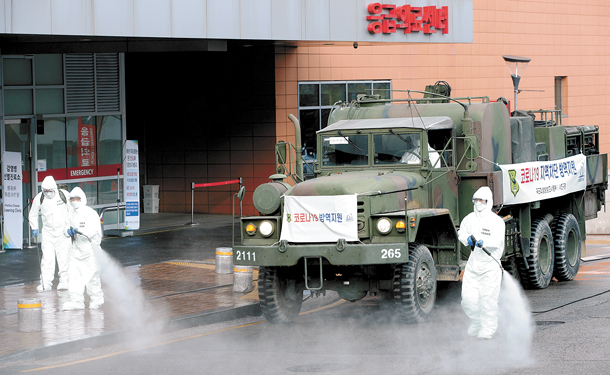 Soldiers from the Armed Forces CBR Defense Command are engaged in disinfection activities against the new coronavirus in front of the Catholic University of Korea Seoul St. Mary’s Hospital on March 4. [NEWS1]

But the defense strategy can be useless against a pandemic. A virus cannot be deterred. Money and time required for containment can be enormous.

The coronavirus has threatened not just individual health and lives, but also rippled throughout the nation and the globe. Because of the travel ban, people cannot move around. Factories are stopped and stock markets have crashed, prompting fears of recession. The United States canceled or scaled back the regular military drills it has been conducting with allies across the world. The springtime drill in Korea also was put off. The virus has become a security issue.

Apart from infectious diseases, there are a slew of threats that can undermine national security today. The security front has become broadened and complicated. In international politics, the term is referred to as “unconventional, new and comprehensive security.” Security no longer can be restricted to the political and military realm.

Kim Sang-bae, a political science professor at Seoul National University, calls it “emerging” security. The threat can emerge and spread fast. It has become harder for authorities to contain it. The emerging threats also jump borders through waves of globalization and social networking. The Covid-19 coronavirus, which was first identified in Wuhan, China, in December, spread out across the world in just three months.

A pan-national response is necessary against emerging security threats. But countries have been acting alone and separately in coping with the Covid-19. If the world does not join forces, the mankind could face a greater disaster. The government at home must keep close contact and cooperate with municipal governments, communities, companies and civilian groups. Networking with various sectors is essential.

The military’s role has become more important with the addition of emerging threats. A former defense official said the military, with contingent forces and resources available at all times, can be deployed immediately upon command regardless of what the threat type may be. Two divisions were immediately dispatched in April last year when a massive fire broke out in mountains in Gangwon.

National security strategy also must change to deal with emerging threats. But the military has been unreliable in its traditional role, not to mention the new security threats. The defense minister held a commander conference on Tuesday after multiple military bases suffered civilian break-ins. It is frustrating to see the military floundering amidst mounting threats and greater roles.