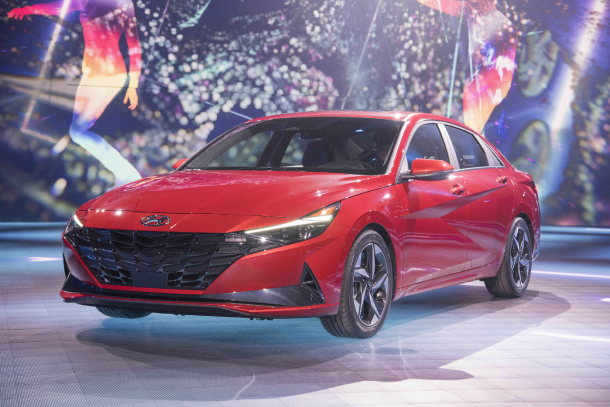 Hyundai Motor unveiled the new Avante compact sedan in the United States ahead of its official launch in Korea next month.

Korea’s largest automaker announced during a world premier event Wednesday that it is offering the seventh-generation Avante with a significant design overhaul and upgraded safety and convenience features.

Local orders of the new Avante will start Wednesday next week, at which point prices will be announced.

The compact sedan will be available in a 1.6-liter gasoline engine option and one with a 1.6-liter liquefied petroleum gas injection engine. Hyundai Motor is planning to introduce two more Avante models later this year.

“First introduced in 1990, the Elantra, known in Korea as the Avante, is a critical model in our U.S. lineup and a key driver of Hyundai’s global success,” said Hyundai Motor Chief Operating Officer Jose Munoz during the launch event. “For model year 2021, we’re taking [the] Elantra to a whole new level of appeal to a new generation of customers. We are daring with cutting-edge design and advanced technologies, and we are returning [the] Elantra to its sporty roots for all the young disrupters who are ready to challenge the status quo.”

The new Avante follows the same design concept of the eighth-generation Sonata and the upgraded sixth-generation Grandeur sedans, both of which launched last year.

The sedan got longer, wider but shorter than its predecessor to offer sportier and dynamic looks. The interior contains a panorama-connected display, high-tech safety features, Kakao’s voice recognition command system and car-to-home features.

The unveiling event in Los Angeles had no on-site attendance, as public gatherings have been limited following the growing coronavirus outbreak in the United States. Hyundai Motor said the event was instead broadcast live in major markets like Korea, North America, China and Australia.

This was similar to the launch of Kia Motors’ Sorento and Cadillac’s XT6, both of which started local sales this month. The coronavirus outbreak has been forcing automakers to refrain from opening physical launch events for the public and holding other media events.

Sales for the new Elantra in the United States is planned to kick off this fall.