Samsung AGM is grave, not hostile

Samsung AGM is grave, not hostile 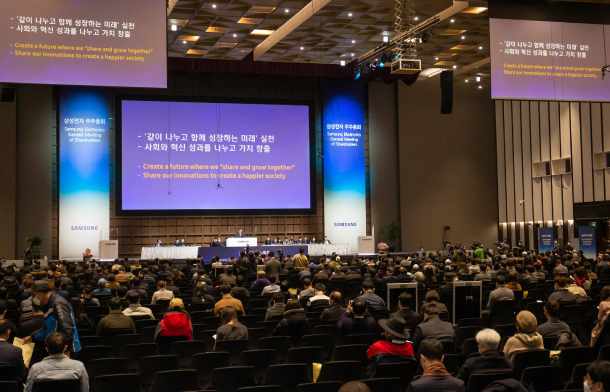 Outside the venue, three doctors and seven nurses stood by a white tent and ambulances. Staffers in black suits, white masks and rubber gloves took the temperatures of attendees.

Before entering the meeting hall, shareholders were asked to fill in questionnaires with information about their health, recently visited countries and other personal information - in case any of them test positive for the coronavirus in the near future. A yellow envelope held the annual report and special goodies: hand sanitizers and face masks.

“We would appreciate it if you do not relocate from your designated seats. Please keep your masks on when you speak through the microphone,” announced a Samsung staffer on stage ahead of the meeting, which began at 9 a.m.

Held at the Suwon Convention Center, this was Samsung Electronics’ first annual general meeting held outside the company’s own building.

After splitting shares in 2018, the company saw a capacity crowd of more than a thousand shareholders at its Seocho office, southern Seoul, show up for its meeting last March. Some shareholders had to wait up to three hours to get in. Samsung was forced to issue an apology for its insufficient preparations.

The hall rented this year had a maximum capacity of 2,000 seats, more than triple that of last year’s venue. For safety’s sake, the company made sure that two seats were empty in between each shareholder. Last week, it urged shareholders to use electronic voting - a system the company adopted for the first time this year.

The preparations this year were enough, and the actual number of shareholders who showed up in the massive conventional hall was around 400.

“There was a big focus on shareholders’ safety this year,” said a Samsung spokesman. “Among the full capacity of 2,000 seats, 1,500 were available, but the actual turnout was much lower so we ended up with even more space.”

At the 51st annual shareholder meeting, three agenda items were voted on: the approval of Samsung’s 2019 financial statements, a ceiling on directors’ wages and the appointment of two internal board directors. All passed.

A major concern expressed by top executives and shareholders alike was the effect of the coronavirus pandemic on business.

“Regardless, the market growth for artificial intelligence, automotive [technology], along with investments in data centers and 5G networks are expected to increase overall chip demand.”

To shareholders’ questions, Samsung President Kim Hyun-suk, who is also the head of the consumer electronics division, said the pandemic has had zero effect on the company’s production of products.

But in terms of demand, Kim said it was too early to determine the effect as “the coronavirus spread has slowed down in Korea but has just started in other countries.”

While shareholders didn’t complain about the venue this year, the Wednesday meeting had its share of drama.

One shareholder constantly interrupted the meeting, asking the company to apologize and rehire a former Samsung employee who is on a hunger strike in Gangnam District, southern Seoul, claiming he was fired after attempting to establish a labor union.