New cluster of at least 75 cases found in Daegu

New cluster of at least 75 cases found in Daegu 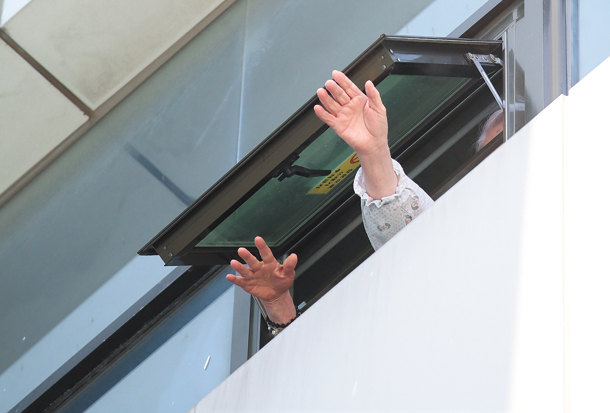 Elderly people on Wednesday wave from a window at Hansarang Care Hospital in Daegu, where another cluster of coronavirus infections was found. [NEWS1]

At least 75 new infections of the coronavirus have been traced to a hospital for the elderly in Daegu, local officials announced Wednesday, igniting fears of another major outbreak in Korea’s epicenter.

The latest cluster of infections was reported as daily new infections in Daegu and the surrounding province of North Gyeongsang in Korea’s southeastern region had been dropping.

Daegu officials announced that 57 out of 117 patients at Hansarang Care Hospital in Seo District, Daegu, as well as 18 out of 71 medical workers tested positive for the coronavirus so far amid ongoing epidemiological investigations.

A nurse at the hospital started showing symptoms of the virus on Monday and tested positive, prompting health officials to test everyone at the hospital. The hospital has now gone into cohort isolation, the shutting down of an entire building or institution to prevent the spread of a contagious disease. 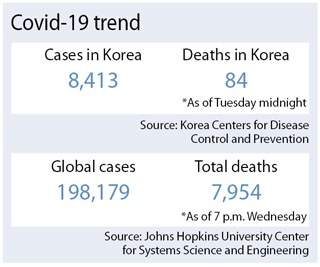 Daegu officials said Wednesday that patients who already tested positive were being transferred to a state-designated hospital for coronavirus treatment or, if their symptoms are not severe, to a facility for isolated treatment.

Daegu Mayor Kwon Young-jin said officials had been in the process of going down a list of about 390 establishments in the city where mass infections seemed likely, such as nursing homes, hospitals for the elderly and social welfare centers, to check whether any coronavirus patients had gone unnoticed. Hansarang Care Hospital was on the list.

Kwon said Wednesday the city detected 88 patients after getting through around “30 percent” of the list, including the cluster of 75 from Hansarang Care Hospital. The rest were from four other nursing homes or hospitals for the elderly in Daegu.

The new cluster in Daegu was found as the Korea Centers for Disease Control and Prevention (KCDC) announced Wednesday morning that 93 new coronavirus infections were counted Tuesday, higher than Monday’s figure of 84, bringing Korea’s total infections to 8,413.

Daegu had 46 infections, Gyeonggi 15, North Gyeongsang nine and Seoul five. Some of the 75 cases from Hansarang Care Hospital were not included in Daegu’s count because they received their test results Wednesday morning, meaning their cases would be announced by the KCDC this morning.

By Tuesday midnight, the national death toll stood at 84, three more than the previous day, while 1,540 people were proclaimed to be fully recovered, 139 more than the day before. The KCDC said Wednesday afternoon that 58 patients were in critical condition.

Daegu officials said Wednesday they aren’t sure how the virus penetrated Hansarang Care Hospital but mentioned that “many” patients testified to health authorities they first felt symptoms seven to eight days ago.

Asked by reporters in a press briefing why they hadn’t voluntarily asked to be tested earlier, Daegu officials said they were still looking into the matter.

The second-largest cluster in Korea’s capital area - which includes Seoul, the surrounding province of Gyeonggi and the neighboring city of Incheon - grew to 61 cases Wednesday morning, up from 52 cases tallied the day before. Among the 61 infections traced to the River of Grace Community Church in Seongnam, Gyeonggi, just south of Seoul, 54 were members of the church, including the pastor and his wife, and seven people who had contact with them.

Health officials believe the church’s bizarre preventive measure for the coronavirus triggered the opposite effect. CCTV footage showed the pastor’s wife spraying saltwater into church members’ mouths and on their palms with a handheld sprayer, claiming that the liquid was meant to disinfect them. Gyeonggi officials said they think an infected patient came into contact with the sprayer earlier this month. The pastor’s wife testified she used the same sprayer on all members and did not disinfect it.

A few more cases linked to the largest cluster in Korea’s capital area, at an insurance call center in Sindorim-dong, Guro District in western Seoul, were also reported Wednesday, bringing total cases to 137. Most are employees of the call center in the 19-story Korea Building while the rest are workers at other companies in the same building or people who had close contact with them.

How the virus got into the Korea Building is still a mystery.

More cases were reported at Bundang Jesaeng General Hospital in Seongnam as well, including the hospital’s director, a 55-year-old man surnamed Lee. Officials from Seongnam’s city office and the hospital said Lee tested positive Wednesday morning after feeling a cough and runny nose from Monday.

Lee’s case brought total infections linked to the hospital to 30.

KCDC Director Jung Eun-kyeong said in a briefing Wednesday afternoon that Lee felt a headache from March 11 or 12 and that an epidemiological investigation was underway. The hospital closed its emergency room and stopped providing outpatient services on March 6, when its first case of the coronavirus was detected.

News of Lee’s infection rang alarm bells at the Central Disaster and Safety Countermeasure Headquarters, the Korean government’s core task force for fighting the coronavirus, because he had participated in a meeting with health officials and major hospital directors last Friday at the Conference House Dalgaebi, a Korean restaurant in Jung District, central Seoul.

The meeting was presided over by Vice Health Minister Kim Gang-lip and attended by seven other members from the disaster headquarters, local health officials said. The members decided to quarantine in their homes Wednesday.

Seoul Mayor Park Won-soon announced Wednesday that his city would set aside nearly 327.1 billion won ($261.7 million) to provide so-called “disaster emergency living expenses” of between 300,000 won and 500,000 won to some 1.2 million low-income households to financially help them cope with the outbreak. Park had previously asked the central government to provide 600,000 won in basic funds to low-income households across the nation and include the plan in its supplementary budget, but that proposal was dropped Tuesday.