New coronavirus cluster of at least 74 found in Daegu hospital

New coronavirus cluster of at least 74 found in Daegu hospital 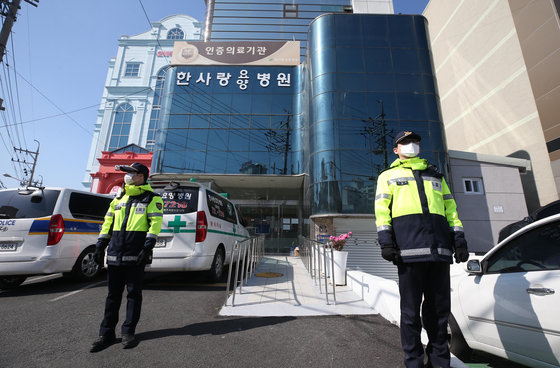 At least 74 new infections of the coronavirus have been traced to a hospital for the elderly in Daegu, city officials announced Wednesday morning, igniting fears of another major outbreak in Korea’s epicenter.

The latest cluster of infections was reported as daily new infections in Daegu and the surrounding province of North Gyeongsang in Korea’s southeastern regions had been dropping lately.

Daegu officials announced in a press briefing Wednesday morning that 57 out of 117 patients at the Hansarang Care Hospital in Seo District, Daegu, as well as 17 out of 71 medical workers tested positive for the coronavirus so far.

A nurse at the hospital started showing symptoms of the virus on Monday and tested positive, prompting health officials to run a test on everyone at her workplace.

The hospital is currently under cohort isolation, the shutting down of an entire building or institution to prevent the spread of a contagious disease.

Daegu officials said patients who have already tested positive were in the process of being transferred to a state-designated hospital for coronavirus treatment or, if their symptoms are not severe, to a facility for isolated treatment.

Daegu Mayor Kwon Young-jin said officials had been in the process of going down a list of about 390 establishments in the city where mass infections seemed feasible, such as nursing homes and social welfare centers, to check whether any coronavirus patients had gone unnoticed.

Kwon said Wednesday the city detected 87 patients after getting through around “30 percent” of the list, including the cluster of 74 from Hansarang Care Hospital. The rest were from four other hospitals and a nursing home in Daegu.

Daegu had 46 infections, Gyeonggi 15, North Gyeongsang nine and Seoul five. Some of the 74 cases from Hansarang Care Hospital were not included in Daegu’s count because they received their test results Wednesday morning, meaning their cases would be announced by the KCDC Thursday morning.

The national death toll stood at 84, three more than the previous day, while 1,540 people were proclaimed to be fully recovered, 139 more than the day before.