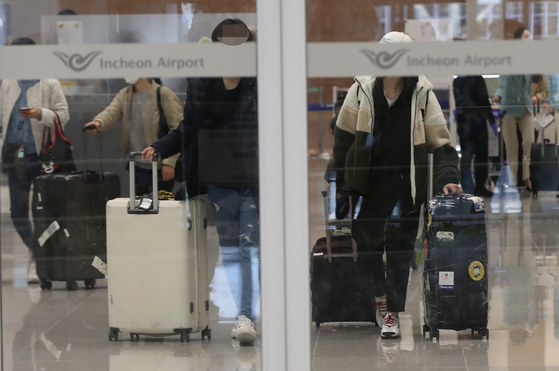 Hundreds of Koreans stranded in Europe, Asia, the Middle East and even South America are looking for ways to return home as the coronavirus pandemic forces countries into lockdown mode, restricting travel.

Italy, with more than 31,500 confirmed cases and 2,500 deaths, the highest outside China, has been in lockdown for the past week, and airlines have cut flights going to the country. Of some 4,600 Koreans residing in Italy, an estimated 350 Korean residents in Milan want to return to Korea as soon as a flight can be arranged, confirmed a Seoul Ministry of Foreign Affairs official Wednesday.

Koreans students and businesspeople in Italy say that with direct flights between the two countries cut off, it’s difficult to find flights out.

Korean Air has suspended all routes to Europe except flights to London and Paris. Likewise, Asiana Airlines is only operating its flight to Frankfurt.

An association of Korean residents in Italy have been surveying how many people want to return to Korea to arrange a chartered flight. Korean Air can fly chartered flights if the minimum requirement of 200 seats is reached.

“There are cases in which airlines can operate flights when a minimum number of passengers are procured,” a senior Foreign Ministry official told reporters Wednesday. “Italy is such a case.”

The official added, “The embassy and consulates are supporting [the association]. Korean people wishing to return are expected to be able to do so.”

A group of around 80 Korean residents of Iran, another country strongly hit by the virus, are trying to return to Korea on a chartered flight. There are over 16,000 infections and 980 deaths reported in Iran, though experts believe the numbers can be higher.

There were over 198,000 reported coronavirus cases and over 7,900 deaths globally as of Wednesday, and the World Health Organization last week named Europe the new epicenter of the pandemic.

As of Wednesday, 157 countries and territories have some form of entry ban or strengthened quarantine measures on travelers who have been in Korea, according to Seoul’s Foreign Ministry, despite Korea’s slowdown in new cases since last week.

With the global spread of the disease, the world is going into isolation mode, and hundreds of Korean travelers and overseas residents are seeing escape routes cut off as countries abruptly seal their borders. Seoul’s Foreign Ministry and overseas embassies and consulates have been in talks with the countries to work out returns for these people.

People of many nationalities are similarly caught up in the confusion of abrupt travel bans and changing flight situations.

The Philippines put its largest and most populous island of Luzon under lockdown as of Tuesday. Over 50,000 Koreans reside in Luzon, where the country’s capital Manila is located, and Seoul diplomats estimate that over 1,200 of these people wish to return home.

On Monday, Philippine President Rodrigo Duterte declared existing travel restrictions were not enough and announced enhanced quarantine measures set to run through April 13, ordering the suspension of land, air and sea travel. Philippine authorities initially asked foreign travelers to leave Luzon within 72 hours to avoid being stranded, causing much confusion. Late Tuesday, they said the deadline had been lifted for foreigners and they could leave Luzon any time during the quarantine.

There are also some 150 Korean tourists stranded in Peru, which announced it was shutting its borders Sunday night without prior notice. Of these, 84 tourists are in Cusco, a city in southeastern Peru that is 1,000 kilometers (621 miles) from the country’s capital of Lima.

“We are taking into consideration how to transport them from Cusco to Lima and of course back from Peru to Korea,” the Foreign Ministry official said Wednesday. “We will review the option of a chartered flight depending on the situation.” Korea could ask for cooperation from other countries trying to bring back their citizens from Peru.

Korea is expanding its own special entry procedures to all foreigners entering the country starting Thursday, requiring temperature checks, health questionnaires and the downloading of a mobile app to track visitors’ conditions.

Those measures were applied previously to China, Japan, Iran, Hong Kong and Macau and were additionally applied to European countries Monday.

More than 13,000 travelers entered the country on Monday, and several new patients this week tested positive for the virus after recent visits to European countries and the United States.

The Korean government evacuated hundreds of Koreans from Wuhan in China’s Hubei Province, where the coronavirus originated, on three chartered flights in late January and early February. These evacuees were later put into quarantine in government facilities for two weeks, the incubation period of the virus.